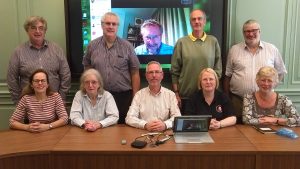 Home & Away Harrow Style- an update on Council reform

It’s now six months after the votes passed at the Central Council meeting last May, and I would like to take this opportunity to report once more on progress with reform and renewal of our central ringing organisation. In this way I hope to demonstrate our accountability to the exercise.
On October 27, the newly formed Executive had a full day face to face meeting – our first opportunity to do so. OK, not strictly “away” for me, as Harrow is my current home, but it was definitely “away” for everybody else, particularly David Smith beaming in by skype from downunder.
We didn’t hug any trees, we didn’t connect with our six-sigmas or magic quadrants, and we didn’t lose ourselves in blue sky thinking. Instead, we stuck to a fairly strict agenda, with a focus on two main areas of reform activity – to consider strategic direction for the next five years, and to consider appointments for Workgroup Lead positions.
The CRAG report proposes the following mission statement for the central ringing organisation:
To be the strategic leader and public voice of the ringing community, the arbiter of standards; and to promote an environment where ringing can flourish.

Using the above mission statement as our starting point, the Executive undertook an exercise to identify specific strategies on which the new central ringing organisation will focus in the medium and long term. A strategic plan is now in draft, and will be the subject of a further update early in 2018. In brief, the Executive is very conscious of these three needs:

A core element of the reform agenda proposes the formation of Workgroups, and another major task on the Executive away-day was to consider candidates for Workgroup lead positions, drawn from both “in” and “out” existing CC membership. I am now able to advise the appointment of the following Workgroup Leads:

Although commencing their work now, the new workgroups and workgroup leads operate “in shadow form” until the next Council meeting in May 2018. Workgroup leads have started engaging with chairmen and members of existing CCCBR committees, aiming to articulate Terms of Reference. They have also begun the task of recruiting new workgroup members, not only from those who have already volunteered, but also by identifying others with relevant skills, experience and qualifications to offer.

Other activity
Meanwhile, work continues in a number of other areas articulated in the CRAG reform proposals:

In conclusion
I trust this update demonstrates that there’s plenty going on, and that CCCBR’s leadership team is genuine and sincere in its efforts to engage positively with the change agenda. Rest assured, this is not change for change’s sake, but a serious effort to create structures appropriate for the 21st century challenges and opportunities facing ringing. Over the next few months there will be further updates across all these various dimensions of activity.