The Library makes available below, in chronological order, various publications of interest to ringing historians and collectors of ringing books. Copyright of the images is held by the CCCBR but they may be downloaded for personal use.

Clicking on a reference will open the document in a new browser window or tab.

The Libary Steward would welcome comments on what is available and possible future developments.
The indexes to Campanology and The Bellringer now have a point-and-click facility, thanks to Tony Smith. 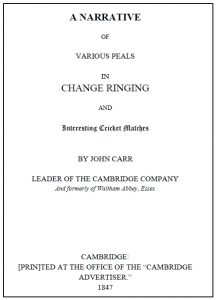 John Carr (1799-1873) learned to ring at Waltham Abbey in Essex. He made something of a reputation for himself in London and the eastern counties by performing handbell touches of Oxford Treble Bob and Grandsire Triples four-in-hand, with his brother, William, ringing the other four bells. Though John spent most of his life in Waltham Abbey, he moved to Cambridge in 1843 and lived and rang there for just over four years. During that time he wrote and published a short pamphlet that described both the ringing expeditions he made around East Anglia and notable events from his earlier life. In addition to his bellringing interests, Carr was an enthusiastic and competent cricketer and some of these successes are also described in A Narrative of Various Peals in Change Ringing and Interesting Cricket Matches.

A Narrative of Various Peals in Change Ringing, and Interesting Cricket Matches 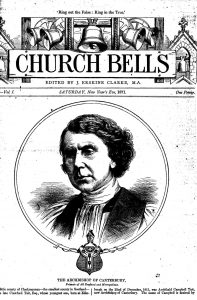 Church Bells was a weekly paper for church folk, published towards the end of Victoria’s reign. The first edition appeared on New Year’s Eve, 1870 and it came out regularly until August 25th 1906. The paper began with Reverend John Erskine Clarke (1827 – 1920) as proprietor and editor.

From the very beginning the contents included a column on bells and bell-ringing under the direction of Revd H T Ellacombe. This proved successful and the column was extended to a full page and included contributions by many of the leading ringers of the time. Only one issue out of 1861 did not contain the news of bells and bell-ringing. The section remained under the nominal control of Ellacombe until his death in 1885, but Ellacombe’s remoteness from the main centres of change-ringing led Erskine Clarke, in about 1878, to invite Harvey Reeves to look after it. When Reeves moved on to start The Bell News and Ringers’ Record in February 1881, he was succeeded by James Robert Haworth, who continued to edit the page until about 1895.

In 2014 the John Taylor Bellfoundry Museum (and the Board of Bell Foundry Collections Ltd) kindly lent their almost complete set of Church Bells to the CCCBR Library to allow all the material relating to bells and bell-ringing to be scanned and made available online. Making it possible for the scans to be made while the volumes were disbound greatly assisted the undertaking of the project and helped to ensure the best possible quality of the images. 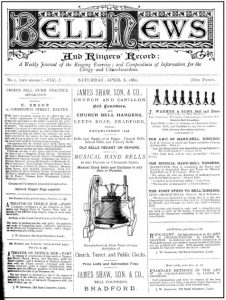 Bell News was the first journal solely devoted to ringing. It appeared monthly from February 1881 until April 1882 and then weekly until 25 December 1915. All issues can be accessed below.

Bell News is also available on DVD on application. 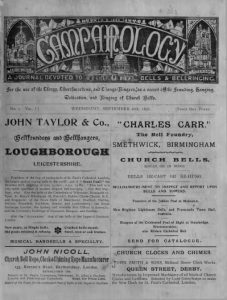 The first paper solely devoted to ringing was The Bell News and Ringer’s Record (usually called Bell News), which appeared between February 1881 and 25 December 1915. This had two short-lived rivals, the first of which was entitled Campanology. The proprietor and editor was William Bedwell and the office was at 221 High Street, Lewisham. Essentially the same as Bell News, it was laid out more as a magazine. In the introductory remarks in the first issue of 16 September 1896 it was stated that “…the necessity of a bright and cheerful journal … has for years past been plainly manifest”. In the pages of Bell News there was no mention of its competitor, but it is evident that this new venture affected its circulation, for a new advertising flyer for Bell News was issued. This is undated, but from internal evidence it dates from February 1897 or soon after, and presumably was issued before the demise of Campanology, the 26th and last issue of which appeared on 10 March 1897. It had paid the penalty of being too similar to Bell News. (John Eisel, September 2000)

The Library is grateful for the permission to use the comprehensive index compiled by the late Cyril Wratten which lists, amongst other subjects, every ringer who rang a peal and every tower mentioned in ringing performances in the journal. 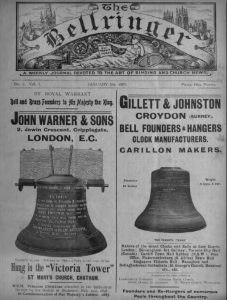 The threat of a rival journal changed nothing in the format and content of Bell News, and another attempt was made to start an alternative ringers’ paper ten years after Campanology. A circular was sent out late in 1906 and the first issue of The Bellringer appeared on 5 January 1907, costing 1d (½p). The editor was William C Hunt, and a major contributor was William Willson of Leicester, who wrote under the pen-name ‘Jingle’ and who had previously contributed a regular column to Bell News under the same pen name. The opening editorial, without actually naming Bell News, stated that a paper should be published on time, inferring that Bell News was regularly published late, thus appearing after meetings, notices of which had appeared in its pages. It also said that it stood for progress, and lamented the demise of Campanology from lack of support, through a mistaken sense of sympathy to the old. However, despite its brighter approach The Bellringer evidently also suffered from lack of support. Five weekly issues appeared, and then it was admitted that the money that had been set aside to start the paper was rapidly vanishing. As a result the paper became monthly from 1 March at a cost of 3½d (1½p). The ninth and last issue was dated 1 June 1907 and on the front was an apology for its late appearance. It was announced that it would recommence as a weekly paper on 29 June at a cost of 2d, but no more issues appeared and thus it went the way of Campanology. (John Eisel, September 2000)

As with Campanology, the Library is grateful for the permission to use the index compiled by the late Cyril Wratten. 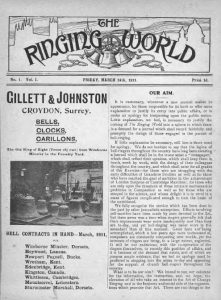 The Ringing World appeared weekly from 24 March 1911. Issues from 1911 to 1970 can be accessed below. Note that when using the index, which uses ‘Year/Page No’ references, some references in years 1912 to 1916 can occur in two volumes. The Ringing World (1911-1970) is also available on DVD on application.
Trollope Manuscript 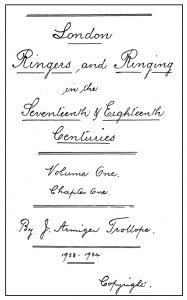 J A Trollope‘s unpublished history of ringing in London in the 17th and 18th centuries. Written between 1933 and 1939, the 7000 handwritten pages also contain sections on the development of bell fittings, early change ringing, composition, ringing in the provinces and published works on bells and ringing. There are many fine line drawings by the author.

These are large pdf files and, without fast broadband, might be slow to download. However, once download they can be used for personal use. Being a manuscript it is not text searchable, but the contents and index pages within the document and the comprehensive bookmarking (thanks to Alan Glover) are useful.

The Science of Change Ringing 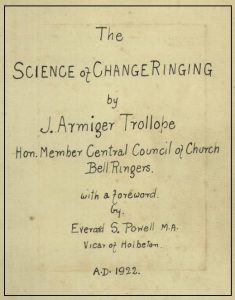 This 412 page manuscript was produced by J A Trollope in 1922 with an introduction by Rev E S Powell. In his Bibliographia Campanarum (1935) he describes the work as ‘an explanation of the abstract cyclical movement which is the fundamental principle on which change-ringing is based’.

The Science of Change Ringing

Essays on bibliographical subjects are issued to the Friends annually, together with a newsletter. The essays listed below, all by Dr John Eisel unless otherwise stated, can be viewed online.