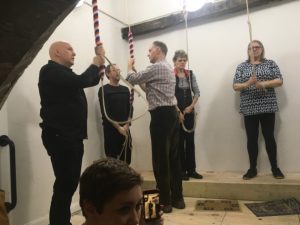 Ringers Remember in Huntingdon – check this out!

Frances Ross had a chat with PRO Caroline Stockmann and Big Ideas Company person Vicky Hatchett to get some feedback on a draft article she had written for the Huntingdon Post.  The article has gone live so Frances shared it with me, and it’s really good – especially the way Frances has set out the need in her area for a specific number of ringers.  This strikes me as a really good way of engaging people, as it’s very specific.  You can read article at: http://www.huntspost.co.uk/news/ap-peel-launched-for-bell-ringers-in-huntingdonshire-to-mark-centenary-of-armistice-1-5352560

A team of bell-ringers in Huntingdon is ringing out a special appeal for more members to help mark the centenary of the end of the First World War and to keep the tradition going into the future.

An estimated 1,400 bell-ringers lost their lives in the First World War and a national campaign to recruit 1,400 more in tribute has been launched ahead of a special event in which church bells across the country will be rung on the anniversary of the end of the conflict.

Huntingdon and Godmanchester bell-ringers want to recruit 22 new members to enable them to ring the bells in their three towers on November 11 and do not have enough to go around at present.

Frances Smith, deputy tower captain, said: “The sound of English-style bell-ringing has been a special part of our heritage for over four centuries and our towers need some more people to help us keep the traditions going for the future, especially in 2018 as this is the year that marks 100 years since the end of the First World War.

“Although I haven’t found any of the 1,400 were directly linked to one of our towers, between Huntingdon and Godmanchester we will need 22 bell-ringers to be able to ring the bells in all three towers on Remembrance Sunday.”

She said: “Our current numbers are not sufficient to enable us to do this. We are looking for some volunteers to come and give it a go and see if they would like to be bell-ringers and help us commemorate the centenary of Armistice Day.”

Frances said they were also open to people who felt like taking on a new hobby which involved a unique combination of skills.

She said bell-ringing involved control, which was like riding a bike where you had to anticipate what the bell was doing and guide it to do what you wanted, timing, rhythm were needed along with mental skills in following predetermined patterns.

Frances said bell-ringing was open to people from all walks of life from teenage years upwards, with a minimum height of four feet, six or seven stone in weight and a willingness to climb stairs.

Send to a friend
PrevPreviousFancy ringing 1400 changes of Armistice Doubles?
NextWant to see how you can successfully get your Ringing Remembers or other campaign into your local press?Next
Facebook Twitter Youtube Envelope