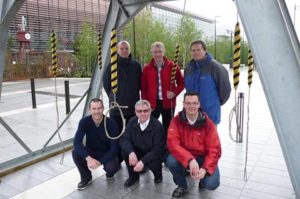 The Conference itself was great – full of ideas and enthusiasm. There was a strong focus on the importance of good striking and how that should form part of the learning process. Sunday saw a running of a new Recruitment and Retention Workshop which has been developed by the Volunteering and Leadership Workgroup and particularly the efforts of Matt Lawrence, Ringing Master of the Shropshire Association. It was also interesting to hear of Matt’s own success in creating a band in his home village of Lilleshall – an inspiration to those wondering how to get ringing going at their local tower. It can be done!

The evening’s ART Awards saw over £3000 of awards given in recognition of recruitment, training, learning and leadership with a wide range of nominations from around the world. Stephanie Warboys orchestrated the awards supported by judges Julia Cater and Jonathon Townsend.

The final version of the Churches Conservation Trust’s recruitment video came just as we weren’t allowed to ring any more so that campaign has had to be postponed. A shame because I was really eager to show it to people as it is one of the best recruitment videos I have seen. It manages to mix people of all ages, multi-cultural and multi-faith. It was tested on non-ringers with very positive feedback.

I joined the Comms and Marketing Workgroup’s regular Skype call and was able to explain the thinking behind some of the ‘Strategic Priority’ actions. They are now thinking about a “Ringing Returns” campaign (needs to explanation!), the creation of a YouTube channel to showcase the best examples of change ringing so all developing ringers can see what they are aiming at, the creation of a ‘Best Local Band’ competition a bit like best kept village contests which would be for local communities or congregations to recognise their bellringers, and starting to look at marketing insights for what sort of people to target (“if you like this then you might like to try bellringing”).

The Strategic Priorities which I mention quite a bit are going to start getting serialised in The Ringing World starting next week (I think).

Talking of The Ringing World, I have suggested in other media that those who are comfortable writing could sharpen their pencils and send material into The Ringing World to make up for the lack of peals and quarter peals. Whilst fresh material is preferable, there are some things I would really like to read again. I particularly remember a report of the ‘Flixton Ringing Match’. I think it was a series on ringing controversies. It was on the back page of a very old copy. Anyone remember it?

Bells in The Netherlands rang out on Wednesday night “as a sign of hope for those in need and a sign of respect for those who comfort them.” Paul de Kok posted a YouTube clip of the bells of Dordrecht Cathedral ringing

This is not so difficult if you don’t need so many humans to do the ringing! However bell ringing in Dordrecht is about to change. Many of us have enjoyed visiting Dordrecht to ring on the excellent ‘t Klockhuys bells and enjoyed the local hospitality. Paul and his son Harm Jan are currently in the middle of a fantastic project to put a ring of 10 bells in the adjacent Groote Kerk tower. These bells, with a tenor of 17 cwt, comprise four fine 1916 Taylor bells donated by the Keltek Trust, with six trebles designed by Mathew Higby and currently being cast by Allanconi in Italy. The frame has been designed and built with local expertise (both Paul and Harm Jan are engineers) and the aim still is to have the ring ready this summer.

With no tower bell ringing going on, and handbell performances restricted to keen (and not so keen) ringing families, many have been turning to Abel, Mabel, Mobel and a range of other tools to try and satisfy their ringing urges. Miscellaneous electronic solo performances have made a brief appearance on BellBoard and may need to find another home. I have not escaped temptation. Something I have meant to ring on handbells for about 18 months will be on the agenda as soon as I am next allowed into the company of five decent and sympathetic handbell ringers.

Topics and presenters are being gathered for a regular series of training webinars to keep ringers interested and active during this shutdown. While many of those who have been ringing all their lives can manage without ringing for a bit, those who are newer to it will miss it much more. However there is still much to be explained and learned while we are isolated and learning how to use WhatsApp, Teams, Zoom, and even House Party. Look out for this over the next week or so.

I have kicked off a small team looking at developing the next generation of mobile belfry which I hinted at in my last blog. One of today’s Microsoft Teams meetings was looking at different designs, sizes of bells, transport options, costs, etc. There was no mention of buses, although a skip wagon was an option for consideration (imagine the tower is the skip and it gets lifted off and plonked on the ground, ready assembled)! Is there a ringer who is currently studying civil or structural engineering at university who would like to join the team and maybe even have the project as part of their studies? It would be an interesting opportunity for someone to get involved. Target is to have the new belfry ready for the 2021 festival season.

Stay safe everyone – ringing will be back.