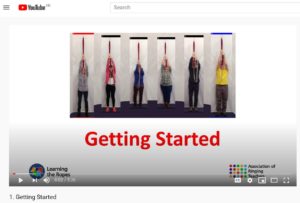 Quizzes, coffee mornings, Zoom pub sessions, ringingroom practices – ringers are trying to retain at least some sense of normality. In the absence of practical ringing, more and more associations are running online training sessions, with topics around learning and construction of methods being particularly popular. My online production for the St Martin’s Guild this week is going to be called “Why do we need bobs?” I have even cut my own hair specially (it’s not a bob).

Another blog, another new Workgroup. In Blog #7 I announced the formation of a group focusing on University ringing. Now it is the turn of schools and youth group development. The aim here is not just about recruiting young ringers, but about how we work with schools and youth organisations to embed bellringing in their own programmes so they become an ongoing source of recruits. The Workgroup members all either work in schools, have introduced ringing into schools, or are involved in association young ringers groups. I am very pleased that Colin Newman has agreed to lead, only six months after I started the recruitment process in the beer queue at last year’s College Youths dinner!

Another activity that is underway is the development of a couple of new residential courses. I have never been on one myself, but their popularity and demand is unquestioned. Tim Hine is working on these, and has made a particularly good start on the Lancashire course. Yorkshire is next. The intention is to go for the four-day residential style, and avoid clashing with established courses. The focus on the north of England is in response to the location of the current residential courses (Hereford, Bradfield, Essex), however it has been pointed out that Hereford is four hours from Cornwall and something in the south west would be welcome. We had better have three! (Imagine if we could learn to ring 60 on 3rds – I might go on that myself.) That’s not out of the question – it just needs people to help doing them as they are mammoth undertakings.

This Friday I will be launching a YouTube competition online and via The Ringing World. 80% of UK internet users accessed YouTube in 2019. One of the Brumdingers taught herself to ring down by looking on YouTube. Ringing content is however variable so part of the hope for this competition is to drive better content, or at least identify the best stuff. Between now and Christmas we will have a monthly competition to identify or submit the best YouTube clips of a particular genre, whether for striking, recruitment, training, or just plain extraordinary. Proper judges, symbolic prizes (“The prize is small, the honour great”)

I talked about ringingroom a fortnight ago but this week Handbell Stadium gets the spotlight. Handbell Stadium is brought to us by Graham John, a Jedi of the handbell world. Graham’s platform is aimed at handbell ringers with motion sensors and has already produced a quarter peal of Yorkshire Major that complies with all the requirements of the CCCBR Framework for Method Ringing. Graham is also organising handbell practices which could have the effect of really bringing on some people’s handbell ringing. My motion controllers have now arrived 😊so a larger audience will be able to witness my handbell shortcomings.

V&L’s Recruitment and Retention workshop that was run on the Sunday of the ART Conference is going to be made available for others to run. It is well worth having a look at, especially as recruitment and retention are going to be the order of the day when ringing returns. Details will be distributed soon.

Roger Booth has released the first four (maybe five by now) of his video tutorials on using Abel. I watched the first two and was amazed how little of Abel’s capabilities I actually use. The first one can be found here: https://www.youtube.com/watch?v=rm22YvuVzNM

The group working on the mobile belfry meets weekly on Microsoft Teams. The aim is to have something much more transportable than the Charmborough Ring or Lichfield Diocesan Mobile Belfry, but which will be capable of being erected in under an hour, and still give a good ringing experience. This is Mobile Belfry 2.0. Oh and it needs to cost nearer 40k than 50k. The favoured design has the belfry already erected but on its side on the trailer for transport, erected by way of a hydraulic ram that will push it to the vertical.

We have given up any thought of having a full Council Meeting in September. We had abandoned the Roadshow element a few weeks back but now we also know that the Council Meeting itself will need to be virtual. That will be a challenge, but if Jacob Rees-Mogg and the House of Commons can do it then I am sure we can. The Ringing World AGM will still be part of that.

Graham John continues to manage the official CCCBR Methods Library.
https://cccbr.github.io/methods-library/index.html?fbclid=IwAR0dbpl5VxmQo2UywFek6VZTe4LQe9Z0CF8CS37tYDC_wJpNVfFDcuF1g0s
In a sign of the times all the new methods reported this week were Minimus methods, just showing that ringers are making the most of limited opportunities! You will see on that site that it links to https://complib.org/ – if you have not discovered Complib, it is a constantly evolving resource that provides in depth method and composition information.

I am sure most of us are crossing things out of our diaries, or not even opening our diaries at all. Peals, tours, striking contests, outings, dinners – collectively thousands of hours of organisational effort is being laid waste. Spare a thought for hard working organisers of ringing and hope that when ringing returns they will retain the enthusiasm for organisation on which we all rely.