Progress in the Dove Project

Now is a good time to update on progress within the Dove Project and give notice of some changes that people need to note in the coming few months.

This is the shorthand description for “Dove’s Guide to Church Bell Ringers”. The first list of all change ringing towers in the world was published in a book by Ronald H Dove in 1950 and seven subsequent editions, before he passed responsibility to the Central Council. Since then the data was digitised and made accessible via a website, as well as in three further publications. This work was managed by John Baldwin, “Dovemaster”, and his son Sid, with the valuable help of Tim Jackson and Ron Johnston, among others. They extended the scope of the publication to include details of individual bells.

In 2018, the restructured Central Council gave the team new terms of reference, and a project was initiated to migrate and organise the data on to a more robust, sustainable, and accessible platform. Tim Pett and Doug Davies were appointed Dove Stewards to join Tim Jackson, and Richard Smith (the designer of Bell Board) was engaged to lead the technical design and implementation. In the first two years, considerable progress was made to establish the new database, developing the underlying principles (e.g. categorising regions and counties here and abroad, how to deal with more than one ring in a tower, codifying the timetable of practice nights, etc.), and converting the data from the old system to the new. All this was done behind the scenes so that we at home would not notice the changes when we accessed the website.

A month ago I was asked to join the team as the Dove Steward to lead the overall implementation, to add a layer of management to the activities to complete the transfer from the old method of storing data to the new, and to press on with future initiatives to popularise the information.

We have therefore split the project into seven broad phases. Phase A to create the new platform and establish the new database is complete. Phase B to develop and transfer the “tower level” data (i.e. the lines you find in the Dove book) is virtually complete. We expect to complete Phase C to transfer the details of individual bells and bell frames by October. This is the point where the old method of publishing run by John Baldwin will cease and the new systems will be fully up and running. After that, we have phases to incorporate additional information into the database, notably mini-rings, former bell towers and tuning figures. We will also be in a position to create a login system (connected to BellBoard logins) whereby people can note down their own collections and browse patterns and maps. We also have plans for a new, modern and engaging website, an app for mobile devices, and a number of other exciting features. 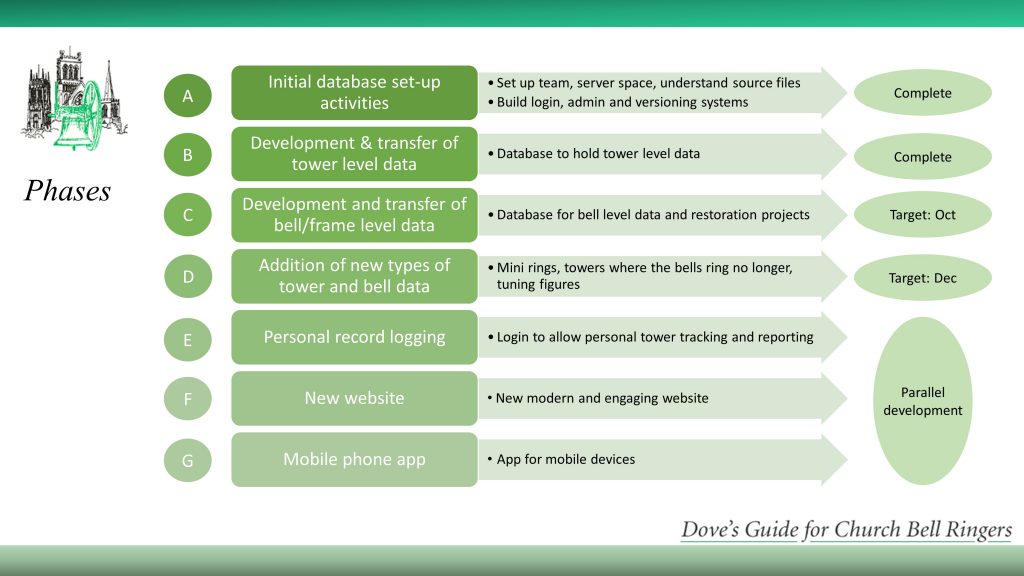 We are now almost ready to complete Phase B, the “tower level” part of the database. We need to do this in a way to test that the new system works in the same way as the old system did, and that the new Dove Stewards are able to make additions and changes in the same way as the Dovemaster does. Since there are very few changes being made to tower and practice nights these days, we have decided to stop publishing tower changes between 1 June and 7July, but still encourage people to submit changes. In the seven day period commencing 8 July, Dove Stewards and Dovemaster will busily put the updates through the systems to confirm everything works. Assuming all goes well, we will make the tower level part of the new database “live”.

During this period, Dovemaster will still upload and publish changes to individual bells as they are submitted. From 8 July however, these too will stop being published while the next phase of development takes place. Nonetheless contributors are encouraged to continue to send updates, even if they won’t appear online immediately. (There are many online researchers among you out there!) These will be vital for testing when the full implementation goes live on or before 1 Oct. 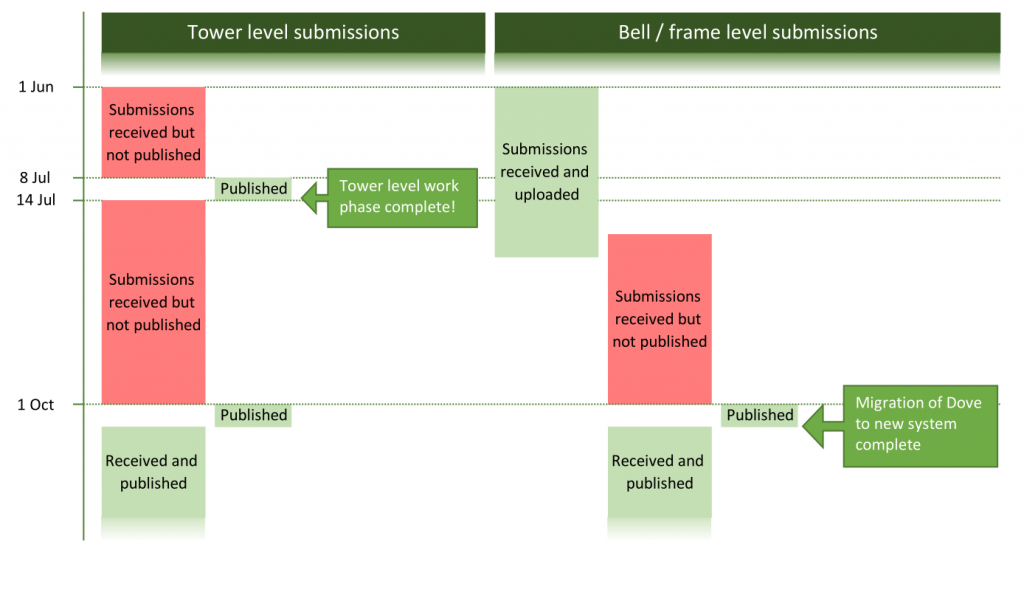 In the meantime, I can report that the Dove Facebook and Twitter feeds are back in use to give regular updates on how things are going. In a future update we will explore the ideas behind the future phases, and how we can make the Dove data more exciting and engaging for ringers.