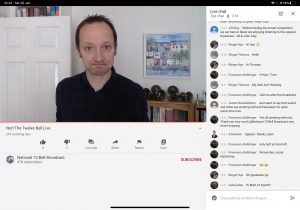 Three months after most of us last rang tower bells there is a glimmer of hope. Bell ringing resumption, in a very limited way, is on the Church’s agenda alongside choirs and organs. Well done to Mark Regan for finding who it was in the Church of England who is advising government, and setting up a meeting with them yesterday morning. A separate report of this meeting will be published shortly, when the accompanying guidance notes have been checked by the Church (just in case they changed their mind today!)

Ringing for Grenfell highlighted how low down the pecking order of consultees ringers are when anything to do with ringing is considered. The Diocese of London announced that bells would ring for Grenfell on the same day that the Government published its guidance on opening churches confirmed that bellringing is still not a permitted activity. This is one of the reasons we are trying to raise the profile of ringing. We are firmly on the radar now and await developments.

The first of my three favourite ringing days of the year didn’t happen in fine style. I certainly benefitted from having at least 10 fewer pints. Matthew Tosh and his team’s wonderful “Not The Twelve Bell Live” helped compensate some of the 1,000 or so ringers who might otherwise have headed to Sheffield for the 12 Bell Final.

Virtual ringing continues to entertain and amuse. I laughed out loud at a comment in the Take-Hold Lounge when someone said they had an enquiry from someone who wanted to learn to ring and they were asked what timezone they were in! That must be the first time that has ever happened!

The custodian of the Lair of the Snow Tiger, Mark Davies (aka Embee Dee) put together a Zoom quarter peal of Stedman Triples with ringers in eight different countries. Is there no limit to how far boundaries can be pushed? “We choose to ring Stedman Triples in Ringing Room not because it is easy but because it is hard.”

Don Morrison has provided a US server for Graham John’s Handbell Stadium. How long before the rather disconcerting “Men in Black” avatars are replaced by people of your choice? Or maybe toy characters! I would so like to ring handbells with a band of muppets.

There is a question of whether any of these ringing tools that have emerged in lockdown will survive and become ongoing support for ringers. Richard Johnston has founded ‘The Dumbbell Society’ and is organising practices for people with dumbbells linked together via Abel and a dose of magic. They have already managed to ring Bob Doubles on distributed simulators, and this is potentially very interesting.

The Council’s Strategic Priorities have now been published on the website, having been serialised in The Ringing World. These were developed at the start of the year and are guiding Council Workgroup activities. They can be found here

Julia Cater’s working party looking at gender imbalance in ringing is well into the data gathering and research phase. Her team of seven will be publishing a website shortly and via that will be asking people with stories to tell to get in touch.

Bryn Reinstadler has kindly agreed to develop a new multi media publication on learning to call and conduct. She is going to focus particularly on making sure it doesn’t matter where in the circle you call from, to try and get us away from feeling that you have to ring a back bell to conduct.

I am delighted that we are continuing to get new people to work on the Council’s initiatives. The latest recruit is Paul Mounsey, who has agreed to represent the College Youths in the Council’s initiative that no ringer should meet a barrier to their own progression (Strategic Priority 2). The officers of the Society of Royal Cumberland Youths have also agreed to support this in principle.

By the time you read this in The Ringing World a new leader of the Historical & Archive Workgroup will be in place, taking over the reins from Doug Hird. Historical & Archive covers a range of activities from the Library to the Carter Ringing Machine. Next month, workgroup member Gareth Davies will be doing a star turn on the Churches Conservation Trust webinar series – his lecture ‘The Ringing Isle’ is on 16th July.

Would your project benefit from £1,000? Ecclesiastical Insurance runs regular awards programmes under which they give £1,000 to whichever causes have received the most nominations. A bit like choosing your favourite charity at a supermarket checkout. Does anyone else always just put it in the tub with the least tokens to even it up? (When I first went to ringers’ teas I used to have pieces of the least popular cakes because I didn’t want anyone to think their cake was unpopular. Does anyone else do that?) The Central Council managed to win one in 2017 and the Peterborough DG has also benefited. It just needs some coordination. Rather than apply again, we thought it would be better to bring it to others’ attention and see if anyone can suggest a project we can all support.

David Smith and Tim Hine in the V&L group have recruited Nich Wilson to lead on Ringing Centre strategy co-ordinating with ART which has its network of ART Hubs. Nich emailed us out of the blue a couple of months ago and said he was interested in getting involved so it’s great to find him a project.

Ringing Around Devon, the quarterly newsletter of the Guild of Devonshire Ringers, was circulated and had an astonishing 18 pages of tightly pack material. And that’s in a period of no ringing! Maybe we should circulate more lockdown newsletters and share more experiences. I remember a long time ago there was a competition for the best newsletter. Tony Kench submitted the College Youths Newsletter, which was produced by him with great pride, only for it to be discounted on the grounds of being “too professional”. A great injustice at the time!