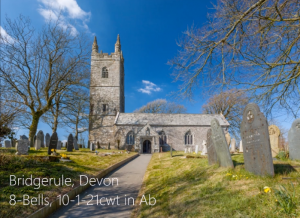 The prize for the July YouTube competition, best striking on eight bells or more, once again goes to Devon, and Scott Adams’ submission of this ringing from Bridgerule. The judges, Wendy and Graham Bloom, commented “the Devon Call Changes showcased were superbly rung, almost faultless for the first half of what was by far the longest video submitted and hypnotic in their consistent excellence.”

This was indeed a challenging competition to judge with some outstanding pieces amongst the 21 entries. The wide range of numbers of bells, ringing styles and occasions on which they were recorded was a welcome reminder of the rich variety of our Exercise and we appreciated good ringing, some magnificent peals of bells and seeing many old friends.

Firstly we listened to all the submissions, focusing on accuracy, consistency and rhythm, seeking out that almost impossible to define “sparkle” that distinguishes the very best ringing. As Matt Hilling found in the 6 Bell competition, there were multiple contenders that achieved those heights and we needed repeated listens of our highest scoring entries to identify the winner, albeit by the very narrowest of margins.

Our winner is “The bells of Bridgerule, Devon”. The Devon Call Changes showcased were superbly rung, almost faultless for the first half of what was by far the longest video submitted and hypnotic in their consistent excellence.

Just pipped at the post was the “Handbell Performance at the Ancient Society of College Youths Anniversary Dinner 2019”, a mesmerising touch of Spliced Maximus which is singularly impressive for being rung immediately surrounded by a critical audience of hundreds!

Our choice for third place was that of “St Paul’s Birmingham – Reading’s 12”.

Thank you to Simon Linford for inviting us to judge, we have enjoyed it. It’s good to know we’ve been forgiven for being in the winning team the first year he reached a National 12 Bell Final, after all he’s exacted his revenge on multiple occasions since then.