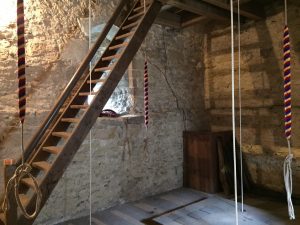 I wouldn’t be surprised if no ringer below the age of 20 is reading this. I would be pleased if they were, but I am realistic enough to know that our print and social media does not hit a youth audience. This point came up this week because Julia Cater asked whether the distribution of the Women in Ringing stories request could go out on Instagram and pick up younger views. The answer unfortunately was ‘no’.

Like them or loathe them, the Kardashians were masters of providing a channel to younger audiences – they almost wrote the book on it (not that it was a book). If you want to reach an audience of under 20s you just pay an appropriate influencer to mention it on their Instragram and hey presto you’ve done it. So is there an opportunity for a young ringer to establish that channel?

I was all set to ask for volunteers to help with quarter peal analysis in this blog but after mentioning it at the Central Council meeting last Saturday I already have volunteers. After many years of sterling service in analysing quarter peals, Alan Buswell has retired from his annual analysis, and the painstaking recording work behind the scenes. Quarter peals are a rich source of information on the state and development of ringing, from the grass roots to the sturdy branches (and the odd dandelion). We don’t actually learn that much from which person or tower recorded the most performances, but what do you think would make for interesting analysis? Who has called most people’s first quarter peal? Who has achieved the most different firsts in a year? It is probably from the footnotes that we can learn the most.

Getting this people-level data accurate is actually very difficult. In a perfect world, no two people would have the same name, no names would be abbreviated, no one would change middle initials or shuffle theirs round for fun (so, I was young and stupid), and definitely no one would be called Phillip. I have rung performances with four different David Smiths and there are 10 others! Unique ringer IDs would be ideal.

We welcomed the Clerical Guild to the Central Council at the AGM and they came with a useful offer of help in current discussions with churches. One thing to consider is increasing ringer representation on PCCs. It is a very good way of raising the profile of ringers in the church. When I learned to ring at Cannock, there was a ‘Ringers Pew’. This was necessary because without it the late-arriving bell ringers would not get a seat. Think about that for a moment. The ringers would not get a seat. Most of the band went to the service (or sang in the choir) and a large parish church was full every Sunday.

This has been a difficult week for Coronavirus guidance. The ‘Rule of Six’ has changed the playing field once again – there can be more handbell ringing indoors but question marks over meeting more than six in church. We might be allowed to reduce our ringing distancing to 1m+ but in view of the surge in infection levels will anyone really want to do it? As you will read in my article to be published in Friday’s Ringing World about our latest discussions with the CofE Recovery Group, their approach is to consider “How do we best look after other people?”

By this stage in the year I would normally expect to have most weekends in the following year booked up, with peal dates fixed up sometimes well over a year in advance. We try and have a family rule that the last free weekend in any month is ‘protected’ just to leave some space for spontaneity! My last 2020 peal was cancelled ages ago and now I am down to having only one definite 2021 peal attempt. To be fair though I was always expecting far more of the weekends to be set aside for Council-related and other activities. I have a couple of call change competition finals pencilled in, half a dozen dinners, trips to Ireland, Dordrecht, New York, and Vernet, hopefully a couple of new ringing courses, and early outings with the Mobile Belfry. It will certainly be interesting to see how 2021 unfolds.

One of those new courses will be in the North West of England. Andy Ingham and his team are certainly hoping that the inaugural event can be next year but at the moment they face the difficulty of not even being able to visit venues to check them out. They are developing good ideas for format and content though, and hopefully the Mobile Belfry may make an appearance.

It’s too early to say that ringing on two floors is catching on, but Elstow in Bedfordshire (see picture) started ringing six from two different floors in August, maintain social distancing in three dimensions. St Paul’s Birmingham has now followed suit. St Paul’s has a school room immediately below the ringing chamber, with two dumbbells. It is a key part of the Birmingham School of Bell Ringing’s success. It is now enabling eight bells to be rung, with four downstairs and four upstairs. Expect to see touches of Triples being reported soon.

Back in the online world, I was delighted to be able to judge a Carlisle DG striking competition on Ringingroom. No sitting in a draughty vestry or in the car with the window open – this contest was judged from the comfort of my own home. There is probably an inverse relationship between the quality of the scenery and the quality of your broadband so Cumbrian ringers are likely to find forces outside their control affecting their striking. All the bands did really well though. Organiser Chris de Cordova had clearly done her research when an unnecessary but very welcome mini keg of Fyne Ales arrived by courier as a gesture of thanks. Now I just need to organise a house party to enjoy it with friends. Ah….