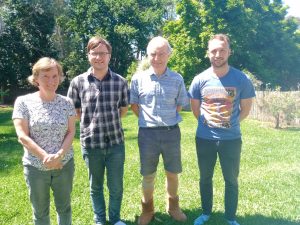 It’s funny how words come into your lexicon (like that one). I have spent 50 years not feeling a need to use the word ‘nuanced’ and now hardly a day goes by without it coming into conversation. (nuanced: a. characterized by subtle shades of meaning or expression.) The current review of the Coronavirus ringing guidance is intended to be more ‘nuanced’ – to recognise the different levels of risk for different people and in different ringing settings, and enable more local risk assessment and decision making. As I write this, the new three tier system has been announced in England, which may then be reflected in the rest of the UK, and we will need to assess its implications quickly.

Of course ringing restrictions are not just about the United Kingdom. In Australia, nearly all the towers were shut at one stage, but now only about half remain listed as completely shut. The others are anything from minimal ringing to nearly normal. Regulations vary enormously from State to State in Australia, as do the policies of individual churches. Some towers are ringing in New Zealand and plenty of quarters are being reported from Wellington. Kilifi is open and ringing! Last weekend would have been the North American Guild AGM in Honolulu but of course it was replaced with a Zoom meeting with rather more variable weather conditions.

Ringers everywhere in the world are grateful for the opportunities presented by Ringing Room but have you also seen what I think is the best explanation of bellringing in a short video ever? I almost need to create a special category in the YouTube competition to be able to give it a prize. Maybe I should send a prize anyway because the September competition didn’t work out. Well done to Kemp Brinson for this video.

A good week for media coverage. The Spectator carried a brilliant article initially asking why the bells were not ringing at Westminster Abbey. Clearly very well researched, completely in tune with the current restrictions, very supportive and appreciative of bellringing. It is behind a paywall but has been posted in the Bellringers Facebook group. I’ll see if we can get permission to publish it (although this may work). One could quote almost all of it but perhaps just: “Among themselves, ringers refer to their art as ‘The Exercise’. How excellent is that? Recently, Catherine Pepinster at the Telegraph urged young people to keep the art alive. I would have thought it was a natural choice for the Harry Potter generation.”

Another Zoom call last week with the CofE Recovery Group which culminated in the post made last Friday and in The Ringing World. What we have also just got on the radar is the subject of guidance to support Devon’s call change competitions. This is something in which I have a keen interest because I would like to see how the focus on striking that these call change competitions engender could be used elsewhere. Some bands might enjoy and benefit from developing call change ringing per se, rather than seeing it as a stepping stone to struggling through Bob Doubles.

After the first peal on Ringing Room, I suggested it was something no one else would ever do. So I am a bit surprised that I have now rung three. This doesn’t put me very high up the leading peal ringers during lockdown list, which is headed by some prolific handbell ringers, for whom the pandemic has almost been an opportunity. At least it has given time for some people to develop their handbell ringing. The list is headed by Daniel Page, Daniel Page’s brother (and recently elected Junior Steward of the SRCY – congratulations Jack), and Colin Newman.

Possibly the most stupendous peal of the pandemic has just been published – the Perrins family ringing Scientific Triples in hand (pictured). Although the magnitude of this achievement will be lost on many, enough people spotted it to give it that most current and coveted of accolades – ‘Top of the Pops’ on BellBoard. Scientific has been rung to a peal in hand once before – by members of the St Martin’s Guild (including the current Editor of The Ringing World on 1-2) in 2008.

Sunday morning saw a call from one Bruno Peek. This might be a name you recognise, but if not he is the self-styled “Pageant Master”, who has spent the last 30 years organising nationwide acts of celebration, described by The Independent as “the go to man when Britain stops to remember the past.” One of his most high-profile ventures was organising the lighting of 250 beacons across the United Kingdom (and islands) for the Queen’s 90th birthday. He was also behind VE Day and VJ Day celebrations. Bruno is very keen on bells. He sees bellringing as a key way to bring communities together and mark special occasions. So far so good. He wants bell ringing to be part of an annual celebration of the founding of the NHS, which we can probably manage (next July). And he wants to help with the “Britain’s Favourite Bellringers” idea. Awesome.

I have not mentioned this before. Imagine an annual competition to find Britain’s Favourite Bellringers, or better still the World’s Favourite Bellringers, voted on by local communities rather than ringers themselves. This would highlight and profile how important bells are and help make people realise what is going on in the tower. I think maybe regional heats, then national finals. This is a good time to do it because the lockdown has made many communities realise that they miss their bells. Bruno loves the idea for a start, and thinks he can get it in the Daily Express and the Telegraph. Let me know if you have any bright ideas about how this might work in practice.

And Bruno also chipped in £25 for the Mobile Belfry. He would like the proposed Mobile Belfry to be the centrepiece of the final celebrations, parked on Horseguards Parade in front of all the media. Now wouldn’t that be great?