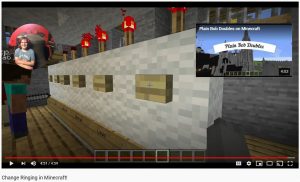 I remember the first letter I ever wrote to The Ringing World. I had spent part of my school holidays adding up the tenor weights of all the rings of bells in Dove and had come to the conclusion that the average tower was a 13 cwt eight. And yes I have to admit this was in the olden days before calculators. I think now that calculation can be done with a keystroke, but I was 13, bored and keen. So here’s a supplementary for 10 points. What are all those bells worth?

I only ask because what we pay to be members of our associations is one of the topics of discussion in the series of consultations we (the Council) are engaged in at the moment – see Friday’s Ringing World for more detail or read about it here. We get to use an astonishingly expensive instrument at very little cost because we provide a service to those who own them. Quite fortunate really.

The pandemic has shown how change ringing can be practised without bells via a number of online platforms. If you don’t know what Minecraft is then this paragraph will be lost on you and you may wish to skip ahead or google it and come back. Innovation in online ringing took another step forward, or sideways depending how you view it, with the first collaborative ringing performance in Minecraft. The pioneering band, comprising Jake Reid (creator), George Vant, Lewis Benfield, Tim King and Luca Greenslade, rang Grandsire Doubles and Plain Hunt Minor in a realm created in this virtual world, with communication on Discord (as used by all serious online peal bands). The performance can be viewed here.

If you are reading the Tuesday edition of this Blog then you have five days left to submit an entry for the October YouTube competition which is for the best online training video. There is lots of good material out there, including some well-curated collections, so this should make up for last month’s competition which didn’t quite work.

You might also want to think about the November comp now for which the subject is “Film that promotes ringing in the most positive way”. Again, that round was dreamt up when we thought we would be ringing again by now, so it may be difficult to produce something involving new ringing footage, but who knows? Who would have thought we would be ringing in Minecraft? Unlike previous months I don’t think there is a need for these videos to be short necessarily.

Staying online, the development of Dove continues to move forward. Last week’s developments included better presentation of towers with more than one ring of bells (slightly esoteric but I have learned something about Ovingham), and you can now see a translation of the nominal frequencies in terms of the given note of the scale plus or minus the number of cents away from that note by hovering over the nominals – again that scores highly on the esoteric scale although it got me looking at the stretch on the trebles at the Bull Ring.

And finally on the subject of all things online, and at the risk of losing even more readers, I have signed up for TikTok so I can keep up with the kids. The app asked me to choose my interests to get personalized [sic] recommendations. None of mine were on the list. So I just went for Sports and Talent. What are ‘Life Hacks’? I didn’t select that just in case. The first two videos it sent me did not fill me with confidence, and my understanding of the ‘Talent’ category was clearly wrong, so maybe TikTok is just not for me (which was also Charlie’s view).

These were a difficult couple of weeks for the Covid guidance team, with the release of the Tiers in England, followed by different Tiers in Wales and Scotland and supported by sub-optimally drafted legislation. Our friends in the House of Bishops Recovery Group were also frustrated – they had to deal with discussions such as whether paying bridesmaids enables them to be classed as ‘workers’ and hence be excluded from the list of 15 who can attend the wedding, and legal advice that said the vicar was not in the 15 despite it actually being their place of work. You start to feel for those involved in trying to draft loophole-free legislation.

Prior to a call with Julia Cater and Elva Ainsworth last weekend to review progress and strategy for the Women in Ringing project, I spent half an hour reading more the stories on the Women in Ringing website. As I have said before, if you don’t think gender is an issue in ringing, read some of these. Julia now has 24 female ringers and one male ringer engaged in the production of the research articles that are getting published in The Ringing World, and they are working a special focus edition coming out in mid November.

Those who look after young ringers’ groups or who interact with young ringers on Ringing Room should be interested in an ‘online ringing’ permission form developed by the St Martin’s Guild for safeguarding. It has recommendations around parental consent, having parents present, and other important considerations. It can be found here.

The young ringers group I run, the Brumdingers, keeps going like many others with occasional and highly valued bursts of tower bell ringing, Ringing Room, and outdoor handbells, now with head torches. This week fresh interest was injected by starting to learn tune ringing on handbells, beginning with Silent Night. “Why are we starting to ring carols in October?” “Because I think it’s going to take you two months to get it right…” Thanks to Don Bedford for sending me a copy of the excellent “Carol Ringing and More.” I joined music teachers everywhere in being amused (at first) by one of the youngsters referring to his bell as the “A hashtag” rather than the more traditional A sharp.