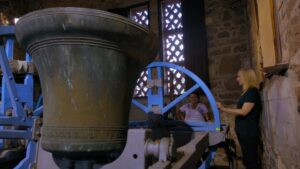 If, like in our house, you play the game involving spotting Minis and shouting “Mini pinch Mini punch” while inflicting pain on your neighbour, you will be enjoying Susan Calman’s “Secret Scotland” series on Channel 5, which features the comedian touring Scotland in a nice red Cooper S (with black roof). The programme presents plenty of opportunities to inflict injury. Last week we finally got to the episode where she visited the Bell Tower in Inveraray and is shown the ropes (did I really say that?) by Ruth Marshall, Ringing Master of the Scottish Association. A great piece of PR by an A list celebrity – well done Ruth. I was also interested to hear Inveraray pronounced by the castle’s owner, the Duke of Argyll, during an earlier episode. His pronunciation rhymed with Demerara rather than Tipperary. (And just in case you were wondering, we allow Charlie to play the ‘different journey’ rule that enables you to claim the same Mini twice, so it does not pay to sit next to her on the sofa.)

We are coming to the end of our YouTube competitions, originally conceived as something to keep ringers interested during lockdown and beyond. The later rounds were designed expecting us to be back to normal and able to produce videos showcasing ringing by now, but the lack of live material is forcing filmmakers to be even more creative. There are a few days left to submit your film that “promotes ringing in the most positive way” – this might be something you have spotted in the past which would be worth revisiting. I cannot find one which was called “What’s up that tower?” or something like that. It was good though.

The pandemic has increased the interest in webinars and YouTube tutorials, with one of the latest being Mark Davies’s continuing Methodoku book promotion tour (available in all good RW bookshops). In the “Coming soon” category is a series of tutorials being produced by Richard Pullin on composing. He is covering different aspects of composing in six instalments, the first of which will be released very shortly. Worth looking out for based on my sneak preview. I even return to the silver screen myself in December in one of the St Martin’s Guild’s series.

The Council and ART are working together on a lot of survival and recovery strategies. We decided to create a ‘Covid hub’ where ringers can go and find Covid-related support and news, rather than searching on different websites. It is hosted on Bellboard (look for Virtual Hub on the menu). The hope is that all online ringing events will be posted there. This week’s featured video is a presentation delivered by Alan Regin for the St Martin’s Guild. Alan discusses his work as Steward of the Rolls of Honour, work undertaken to mark the centenary of the First World War, and the project to install a ring of eight bells in Ypres.

Alan Sparrow has launched a new Android app called Bell Finder, which does what it says on the tin, talking to the Dove database to deliver tower information on your phone. One of the intentions of making the Dove data available via an API was that it enables 3rd party apps to be written. Just need one for IoS now!

By the time you read this we will have come to the end of a series of 19 Zoom consultations on the merits or otherwise of some form of direct membership organisation for ringing. The first ten were with CC members, others with ringers of varying degrees of experience, and we have had four with ringers of school and university age. We have also had about 400 returns of an online survey sent to all the direct subscribers to the CC mailing list. It is now going to take quite a lot of thought to analyse all the views and see if there is actually a proposal that would have a meaningful impact and that has sufficient support to be deliverable. There are some nuggets in there to be sifted out.

The only thing that is certain is the lack of consensus! Looking at the results of the survey, the propensity to favour the status quo increases with age, with those over 70 twice as likely to want the future to stay as it is than those with most of their ringing lives ahead of them. The discussions with young ringers were perhaps the most interesting. Whilst not seeing any need to do away with the territorial associations which taught them, they see ringing as very fragmented, and wonder why all the different parts (RW, CC, ART, 12 bell contest, etc) are not unified. “Ringing’s a bit of a mess really.” Out of the mouths of babes…

Opportunity knocks! We are looking for a couple more people to join the Workgroups in leadership roles.  One particularly needs to do with branding and marketing as we consider how ringing is presented to the outside world, particularly when we come out of the pandemic and need to rebuild. We are prepared to pay for external advice and design, but this will all need coordinating and managing by someone who understands both marketing and ringing. If you are frustrated with how ringing is seen by the general public and have ideas about how to do it better, then we would like to hear from you.

Then we have a number of activities that are in the general area of recruitment, retention, supporting ringers etc. which sit under the very broadly based Volunteering & Leadership Workgroup. We have volunteers who will do things – but the work needs coordination or just more people with experience in pulling the strands together, interpreting the strategy and turning it into workable plans etc. Do you have room in your life for doing something additional that would be of wider benefit? Hours to suit…