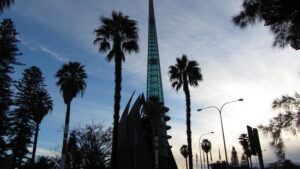 I am currently working with a Dutch colleague whose family lives in Perth, Western Australia. Imagine our mutual surprise when he joined a Teams call from his local bar and it turned out he was in the Lucky Shag, the bar next to the Swan Tower and its ring of 16 bells. Explaining why I had, on more than one occasion, flown halfway round the world to visit that building and that pub was difficult – I may have spent equal time in both – but we soon found common ground dishing Victoria Bitter. On my last visit too long ago, the tower was a relatively isolated and dramatic feature of the Perth waterfront – now it is surrounded by tall buildings with rather less impact. Still pretty cool though.

The Cast of 1000 initiative, which in its virtual phase comprises focused Ringing Room practices for those wanting to learn and develop Surprise Major ringing, has now had 25 practices and its 100th participant. So far, all the practices have had the right people at them at the right time and in the right place knowing the right methods, thanks to the efforts of Stephanie Warboys and an absolute beast of a spreadsheet. We are starting to get people just asking to join the initiative either as helper or beneficiary, and we seem to have enough willing helpers to meet demand. More details can be found here.

Last Saturday I went to two Cast practices, rang a ‘Simons’ handbell quarter peal in between, spent two hours practising for said handbell quarter in the morning (I am the weakest link), ran the Brumdingers RR session, and met up with Vancouver ringers in the evening. It felt like a Saturday from before the pandemic with no time for proper meals or seeing my family. A couple of other people were fitting in Cast of 1000 practices amongst other practices and ringing events. And the quarter was Simon Rudd’s 200th quarter on Ringing Room. Yes, take a moment to let that sink in. Over a fifth of all quarters on Ringing Room have had Simon in.

Nearly a quarter of all the quarter peals on Ringing Room have been in the last month. What do we infer from that? More bands are using it (5,000 accounts have accessed in the last 30 days), more ringers have progressed to the level of expertise that enables them to ring quarters, more people have worked out how to use ethernet connections, or some bands have finally managed to score quarters they have been attempting for ages. It could also be that the server upgrades that have been implemented in the last month have had such a positive impact that computer problems are less of a success factor. Soon you won’t be able to blame t’interweb – it may just be you.

Ding also continues to prosper and add users and bands. The key difference with Ding is that it set out to be much more of a simulation of ropesight – the key press starts the rope moving rather than giving the immediate sound. This makes it much more of a challenge (more like ringing in that respect) but quarter peals are now being rung with the moving ropes. Ding also now has 16 bells, so if you project your screen onto your living room walls, as creator Giles Wood has done, you can replicate the look of amazement we get on visitors faces when they come into the ringing room at the Bull Ring. It’s a lot of ropes. Giles is also looking for people with Virtual Reality headsets to test an experimental version of Ding – if that’s you then please email gilesrwood@gmail.com

One is clutching at straws looking for the benefits to ringing of this pandemic, but one is the opportunity to ring with people you might not otherwise meet. Last Monday I was able to zoom up to a Beverley and District practice, specifically as I wanted to meet and ring with Rebecca Legowski and Damien Garwood. They are both blind, with Damien having learned to ring online after being attracted to ringing by hearing his local tower. Discussion with them on Sunday was whether virtual ringing could provide an entry path for blind ringers, both into handbell ringing and tower bell ringing. They were also keen to establish a group for blind ringers, and also build a network of people with experience of teaching blind ringers. I can collect contact details to pass on.

Has anyone managed to persuade any lapsed ringers to come out and do some virtual ringing? Reactivating lapsed ringers needs to be part of a ringing recovery strategy as they don’t take as long to teach (obvs) and there are lots of them – at least as many as there are active ringers. Depending on what caused them to lapse, some virtual ringing to break the boredom of lockdown might be attractive. I have one target who I am going to invite to a Cast of 1000 practice. Has anyone else activated a lapsed ringer in lockdown? LMK  [Stop press – I have found one, courtesy of my sister in Skipton!]

When I saw that the Truro DG was preparing for a G7 conference in Cornwall I immediately thought it was a mega Grandsire Triples workshop, with much needed guidance on exactly where to make those pesky calls. However, it turns out that the crowds descending on Carbis Bay in June are not going ringing, but just attending a conference of the G7 leaders. The Truro DG’s PRO Jane McCutchan is working hard and successfully to promote the sounds of Cornish bells being rung to celebrate the arrival of global visitors.

Finally, eBells can seriously upgrade your online ringing experience and are selling like hot cakes. They’re not cheap (despite being not for profit – they’re expensive to make), however sponsorship from The Whiting Society is enabling ART to provide eBells to young ringers (under 25) for £25 a pair. Although the sponsorship is limited, if demand exceeds funds available, we will find the money to support those who want them. Expressions of interest to lesley.belcher@bellringing.org