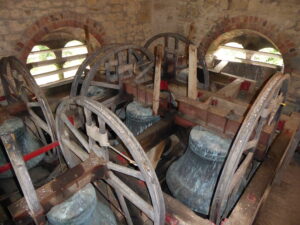 Working with the Church Buildings Council on the Dove Bell Register

The Central Council and the Church Buildings Council of the Church of England (CBC) have agreed that the Dove Bell Register will now be the primary store for all bell and bell frame data held by both organisations, with the CBC supporting the enrichment of Dove with the additional data that they have been collecting in the past few years.

The agreement, which had been a goal for those involved in the recording of bells and bellframes for as long as 10 years, came about at a meeting last week with the CBC. Mark Regan, Leader of the Council’s Strategic Stakeholders Workgroup set the meeting up with David Knight (Senior Church Buildings Officer) and James Miles (Digital Projects and Outreach Manager at The Church of England Cathedral and Church Buildings Division). Also present were Chris Pickford, one of our foremost authorities on the recording of historic bells and bell frames, and Dickon Love, who as Steward of the Dove Bell Register has driven the developments of the underlying Dove database that made this agreement possible.

The existence of separate systems for recording different types of bell installations has long been a frustration of those involved, but has persisted because the organisations have had a slightly different focus on what is most important. Dove set out to record church bells hung for change ringing, and has recorded bells in towers with three or more bells, whereas the CBC has been primarily interested in the recording of all bell and bellframes in the Church of England to record what is important from a conservation point of view, i.e. what they “list”. This difference in focus will be retained going forward, with Dove recording everything, and the CBC being responsible for the conservation data along with other amenity groups.

A further separate store of information which has recently been incorporated into the Dove database is George Dawson’s National Bell Register, which recorded not only all bells in Anglican churches in England but also those in the home nations and in churches of other denominations. That was a significant piece of work in itself.

Technical differences in how the databases store information has until now been the barrier to their combination. The Dove database has information on the bells in 6,000 towers, but prior to the recent work led by Dickon did not have individual bells as the separate data – it recorded rings of bells. The CBC has data on 14,141 churches in its Church Heritage Record (CHR), including 351 with the Churches Conservation Trust, the Friends of Friendless Churches or other trusts. They also have records of 673 churches with frames, and 675 frames in all. The CHR contains in the region of 54,000 bells, which need to be matched with the bells in the Dove database. The data in the CHR originates from the extensive collection of information by George Dawson, which itself has benefitted from submissions by a wider number of people, either directly or via Dove.

There is a further issue in the naming of churches in the databases which makes them difficult to combine. The CBC uses names determined by the Church’s Statistics and Research unit and represent the formal names for each church, names cast in stone. Dove adopts the names of churches as defined by OS Maps and Crockford’s! There are enough inconsistencies between these two sources of data for their combination to be a significant technical challenge, but one which the Dove team is able to crack.

There is going to be a further meeting involving additional people from the CBC as the discussion moves more towards understanding how things are listed. We will also – with the CBC – strengthen the relationship between Dove and the other stakeholder amenity groups, such as the Society for the Protection of Ancient Buildings, Georgian Society, Victorian Society, 20th Century Society and of course Historic England.

This is a significant agreement, both for Dove, and the Central Council. It has only been made possible by the work Mark Regan has done to nurture his relationship with the Church Buildings Council, the CBC’s respect for Chris Pickford’s knowledge, and technical developments of the Dove database led by Dickon Love. Dove is now positioned to be the prime authority on bells as far as these bodies are concerned.