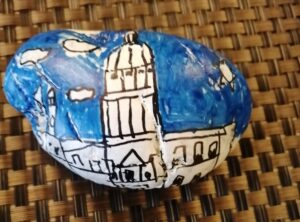 I have got over my daughter Charlie using the term “the olden days” for anything earlier than about 1980, even if for me the olden days would be those of Bill Pye or James George. I don’t think hearing ringers over the age of 25 described this week as “oldies” helped either. However 25 is the upper age limit for the proposed young ringers’ organisation that is currently being put together and consulted on.

A team of six young ringers has been working on this for about three months now and although they still haven’t worked out a name for it, they have what seems to be a really good plan. Last week we set up two Zoom focus groups for them so that they could present their ideas to other young ringers. It is an international organisation being designed by young ringers for young ringers, responding to their needs as seen by them, one of which is to have merch and pins. I didn’t want to point out that we had ringing pins (formerly known as badges) in the olden days – I had a collection of about 20 association badges on my denim jacket until Paul Williams advised me that they were naff.

Ian Roulstone, who is our Workgroup Leader for University & College Ringing, and a Professor of Mathematics at Surrey, is working on a programme to open a new specialist sixth form maths school in 2023. Three of these new schools now exist – King’s College London, Exeter, and Liverpool – and others are planned at Durham, Leeds, Lancaster, Cambridge, Imperial College London, and Guildford (Ian’s one). Each school is associated with a university and teaches Maths, Further Maths, other STEM subjects and music, to students with innate ability. Ian sent an outline of a plan to what appeared to be the crème de la crème in the centre of the ringing/maths/computing Venn diagram. I felt honoured even to be copied in. The idea is to provide material about the mathematics of change ringing, and potentially the crossover with computing, that can be used by the schools in special project work. Might capture a few new recruits with ideal skillsets.

What managed to persuade 40 young ringers to spend an hour in a workshop last Saturday painting stones? Hosted by the Worcester Cathedral young ringers, this was painting stones with themes of bells, memorial and remembrance. Now these 40 ‘Foundation Stones’ will join thousands of others to form part of the UK Holocaust Memorial to be built in London in 2023 (subject to planning permission!). Any other young ringers who take part will go on a ringing outing to London when the memorial is finally unveiled near Westminster Abbey.

The Foundation Stones project is being led by the Big Ideas Company. If that name rings a bell, it is because the BIC was responsible for the Ringing Remembers campaign, working with Vicki Chapman who went on to become the Central Council’s PRO. We are supporting Foundation Stones partly to support the BIC, who are very interested in doing another campaign with us, but also because if we could get hundreds of stones with bell themes on the final memorial it would be a powerful symbol of the link between bells and memorial. The BIC will run workshops for any ringing groups that want one – something a bit different if you’re running out of ideas.

Finally, for what is turning into a bit of a young ringers special, we had a young ringing ‘symposium’ a couple of Saturdays ago to make sure those involved in youth ringing strategies on a wider level are singing from the same hymn sheet, or at least know what others are doing. Following a presentation from Matt Jerome on the proposed young ringers association, we heard what the Schools, Youth and Universities Workgroups are doing, about Roger Booth’s progress on an HLF funding bid for getting bells into schools (working with the Handbell Ringers of Great Britain), the latest plans for the RWNYC, and of course ART’s work in this area.

Not to be outdone by last Saturday’s quarter peal day on Ringing Room organised by the intriguingly named Badgers Handbell Ringers, which saw 60 handbell quarters rung to mark the first anniversary of Ringing Room, the Cast of 1000 is having a quarter peal day on 13 March. There have been 50 practices now with over 100 participants, with lots of ringers either making progress with Surprise Major, or just enjoying being helpful and ringing with different people. That is one of the great things about online ringing – you can ring with people you would not otherwise get to see.

Sometimes the timing of news is just wrong. The Ringing World’s production deadline means my blog needs to be finished on Monday night so that the Editor has just enough time to slot it into its reserved space prior to his Tuesday lunchtime deadline. He’d love it to be earlier! Monday afternoon’s announcement on the possible lifting of Covid restrictions in England doesn’t give me much time to reflect on the implications for ringing, and by Friday we will have needed to catch up with the CofE Recovery Group and publish new guidance. What we just hope is that this is not a false dawn.

One comment from a young ringer when comparing ringing with one of her other activities was “why are ringers so nasty to each other?” The Bellringers Facebook group can be such a force for good but it can also be a forum which proves that young ringer right. Many have stopped using it as a result. We really need the main Facebook groups to be a safe place for our fellow ringers, where the fine line between banter and bullying does not get crossed. We cannot just leave it to the hardworking admins and expose them to even more abuse. Let’s help them stamp it out.

Finally, February 15 was World Hippo Day. How on earth did I miss that?!