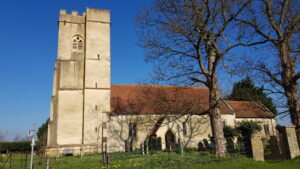 A year ago, we were just starting to think ringing events might get cancelled. A 12 bell contest eliminator at Walsall was an early casualty in our household diary, although the ART Conference just sneaked in. 250,000 racegoers flocked to Cheltenham, and the rest, as they say, is history. (Not that it was their fault of course.)

For the vast majority of ringers, it is a year since we last rang normally on tower bells. My last tower bell peal was now over a year ago and quarter peal even longer. I have finally chucked away the little wad of touches of Stedman I kept in the car on the off chance of getting to call a Sunday morning touch. And then you think about the people you used to meet week in week out, but who you now quietly judge by the tidiness of their apartments or houses, or the quality of the reading matter, or lack of hippos, on their bookshelves.

I think every association must have been through an online AGM. We’re getting these online events really slick now, with last Saturday’s ART Awards (following their first online AGM) being a case in point. The announcement that this year’s Central Council meeting will be virtual again didn’t meet with much more than a murmur – we probably could have a physical meeting this year but not with non-UK resident participants, and not organised at short notice.

An amazing amount of ringing talent was showcased at those annual ART Awards. A record number of entries in a year of little ringing. Details of all the winners can be found here. Online ringing dominated the technology awards unsurprisingly, with the evening finishing with awards to Laura Goodin (Take-Hold Lounge), Graham John (Handbell Stadium), the distributed eBells team (who will soon have produced 600 eBells!), and of course Bryn Marie Reinstadler and Leland Paul Kusmer for Ringing Room.

Derek Williams has set up instances of Ringing Room and Handbell Stadium on a server in Australia to reduce the impact of internet lag for ANZAB users. The Wellington ringers have a couple of sessions a week – interesting that this is a band that is actually ringing their bells currently but is using RR for additional practice and greeting visitors from around the world. They think their use of Ringing Room will continue beyond the end of restrictions.

Remembering back to my IT set up from last year’s Central Council meeting, I adopted a similar strategy last weekend to keep in touch with the Henry Johnson dinner, to attend and speak at the Leicester Guild’s 75th anniversary dinner, and to keep an eye on Wolves’ outing to St James Park. The former two very successful events only spoiled by dropping a couple of points against the fortunate Magpies.

The Salisbury Guild is putting a lot of effort into their Recovery plans, with the second whole Guild workshop coming up – separate sections on retention, recruitment, the Church, and helping novices/anxious to return. They have done a survey of all their towers to ascertain post pandemic strength and are using that as a plan to move forward. Guilds and associations that have done surveys are generally predicting 5-15% loss of ringers and are planning what to do about it. A survey is available as part of the Survival and Recovery Toolbox, with many of the 100 Recovery Champions saying they are going to use it.

The ringing for Captain Sir Tom Moore seems to have been well supported. There were 280 entries on BellBoard, and given not everyone feels a need to post every bit of ringing they do on BellBoard (maybe not wanting to irk BellBoard traditionalists) that probably means there were 500 or so towers that marked the occasion, with good public awareness.

If you want to put similar mass ringing days in your diary, there are two more that we know about. The CofE is supporting Marie Curie on 23 March in marking the first anniversary of the first lockdown in the UK with a national day of reflection. They are really keen on bells being part of it and the Church has asked us specially to take part. So that will be another single bell event at 12.01, following a minute’s silence. https://www.mariecurie.org.uk/get-involved/day-of-reflection

Then on 5 July, Pageant Master Bruno Peek is organising what he hopes will become an annual event marking the anniversary of the founding of the NHS. He has national press coverage lined up and again wants bells to play a large part. Although he was after single bells again, by 5 July we would hope to be able to do far more! https://www.nhsfrontlineday.org/

We continue to cultivate our relationship with the Churches Conservation Trust (see Blogs passim) which looks as though it could end up with custody of an increasing number of rings of bells (they get most of the highest Grade I listed churches). We were invited to the CCT Volunteer Awards, at which David Bagley presented a case study (on YouTube here) on how bell ringing is the principal volunteer activity at Strensham (pictured). The CCT likes bellringers as we are visitors to otherwise unvisited churches, and make a noise. Thanks David for a good plug for the Central Council at the end!

We have a small team looking at the Council’s website, over which we regular get stick. Finding things is the biggest complaint. Bruce and Eileen Butler, and Allen Nunley, North American members of the Comms & Marketing Workgroup (about which I will say more next time) have taken on the task, supported by the webmasters, and we have set ourselves a target of 30 June to deliver some real improvements for users.

A few people kindly pointed out that they also often mistakenly call the Saturday immediately before Easter ‘Easter Saturday’ rather than ‘Holy Saturday’ – not a date that normally features in the bellringing calendar but it does this year – Call Change Competition – Ringing Room. Details next week.