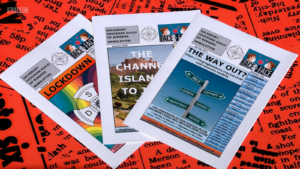 17 May – a date that ringers in England particularly have been waiting for since it was announced as a key roadmap date many months ago. We seem to have had a narrow escape in the start of this ‘Rule of Six indoors’ phase which is going to enable so many ringers to get back to ringing, and the airwaves this morning (I am writing on Monday) are full of commentators at the science/health end of the spectrum urging caution and saying they themselves are not going to the pub. Hundreds if not thousands of communities are going to get a reminder of what their local bells sound like, and many of us will meet people who we have not seen in months.

“This week’s guest publication is ‘Face to Face’, the official newsletter of the Salisbury Diocesan Guild of Bell Ringers.”  Most of us have probably watched HIGNFY, and have wondered whether The Ringing World would ever feature alongside seemingly esoteric journals. Last week ringing finally made the big time. Was it a coincidence that one member of the panel, Jo Brand, happens to be a lapsed ringer? (No) It would have helped our cause if she hadn’t said ringing was “very dangerous”! And then Paul Merton’s double entendre further reduced the chances of a transcript appearing in print. But pictures of happy bellringers have been seen by millions on the Beeb, and the PR team has contacted Jo Brand’s agent to see if we can get her back on the end of a bellrope and taught properly this time.

Last week saw a long series of discussions, presentations and seminars, together described as a “Recovery Convention” by the joint CC/ART organisation team. They started with a lively discussion on the subject “Building a better relationship with your church”, led by members of the Guild of Clerical Ringers, and finished last Sunday with a presentation on “Ringing Schools, Town and Country” led by Clare McArdle of the Birmingham School of Bellringing (town) and Frank Seabright of the Ledbury District (country), both of which think they gained some inspiration from the other!

We’ve all missed ringing, but a lot of us have missed going to the pub too, especially those for whom going ringing is a subsidiary activity before the main event. The penultimate session of the Convention was an online beer tasting, which ended up just feeling like an edition of “An evening with Hayley Young” as 35 or so of us had a convivial hour or three discussing beer and brewing with Hayley’s expert guidance. There is clearly a lot of beer drinking expertise in the ringing community – I learned how to pronounce Schiehallion (and have forgotten again), and it was all very jolly before at 10pm the landlord kicked us out. Then I fell asleep 28 minutes into watching the aforementioned episode of HIGNFY on iPlayer and missed the ringing bit.

The deadline for the annual Westley Awards is fast approaching (30th May). This has been a particularly challenging year for steeplekeepers and those involved in bell maintenance, with precious few opportunities to actually ring bells, but with the consequent issues associated with leaving bells unattended for long periods of time. Those engaged at the less responsible end of the tower grabbing world are used to cautiously ringing up bells which may not have been rung for months, waiting for a clunk and not expecting a stay, but at the more responsible end I am sure you occupy we are grateful that our steeplekeepers are busy keeping us clunk free when we return. So don’t be shy if you’ve worked hard in the belfry – reveal the light from under your bushel, and nominate yourself (because you can).

I could have an entire Blog about developments of Dove so I am going to confine myself to just one, and that’s the impending addition of all the 7300 Church of England churches with some bells (fewer than three or not hung for change ringing). Dove currently has 6,600 entries. This follows the agreement to bring the Church Buildings Council’s database of belfries into the Dove database, and unify their data with ours. Future developments will be other territories, including maybe Italy, and bellframe information. This resource gets better and better.

From the Technical and Taxonomy Workgroup we got news that the next version of the Framework for Method Ringing is about to come out for consultation. It has taken a team of six 11 months and 700 emails formulating changes to 40 sections of the Framework, including considering how to report new forms of ringing that have emerged during the pandemic. There is a well-known legal maxim that “Hard cases make bad law” – warning against trying to adapt laws to satisfy outlier cases. The approach of the CC under the Framework is not to rule in, rule out, or otherwise pass judgement on different types of method ringing, but to ensure that readers of performance reports are clear about what was rung, and how, so they may form their own opinions. Some things we choose to ring, like Dixons and Jump methods (yes there are 12), are very hard to describe precisely!

Finally, I was reminded of the importance of one of our strategies of making sure we don’t lose ringers when they go to university. In the 1980s I rang with a great young band of teenagers. We rang lots of surprise major and some ended up ringing 23 Spliced. Four of those young ringers were lost to ringing round about the university stage. One, let’s call him Trevor, re-emerged over 30 years later – a different hobby had grabbed him at Uni, and then working life and family only left room for one pastime. Fortunately 30 years later his rugby days are over, he found his local tower, and is now District Ringing Master. How many Trevors are there? Ringing needn’t have lost Trevor (or the others). We are lucky we’ve found him again.

Send to a friend
PrevPreviousHave I Got News for You? Well yes we have
NextThe 124th Annual Meeting of the Council will be held on SATURDAY 4th September 2021.Next
Facebook Twitter Youtube Envelope