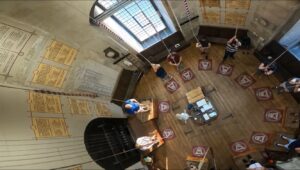 When you live in a house with five cats, two of which are feral and haven’t been brought up properly, and another of which is neurotic, you get used to your stuff getting weed on. A new low was hit last Sunday morning when I arrived at St Martin’s Birmingham to ring lots of bells for the first time in ages to find that my facemask had had the treatment!

This was the week of course that so many people got back to the sort of bellringing we have been looking forward to, with or without facemasks. Social media was flooded with reports of ringing eight ten or twelve bells. The Bishop of London tweeted the bells of St Paul’s Cathedral flooding Paternoster Square with sound, and a great video of the ringing was circulated (picture and video by Jemma Meyer).

For many it seems to be a cautious return, with the emphasis on rounding people up for practice and service ringing. There were only 15 tower bell peals in the first week post restriction – compare that with the equivalent week two years ago when there were 83. There are lots of organisers finding that some do not want to ring for very long in small ringing chambers with bad ventilation. I am myself a relatively keen peal ringer but it’s going to be a slow comeback. I apply my “Chris Whitty test” now.  If Chris Whitty was a bellringer would he say yes or not?

The ‘Pingdemic’ is now a big threat to ringing events, small and large. Last week’s Brumdingers practice had three young ringers missing because they were self-isolating from a positive case at school (one of which subsequently turned out to be someone misreading the LfT!). Meeting enough ringers is a bit of a lottery. Peal bands might start needing to have a ‘Ping Reserve’.

We published what we really hope will be the last guidance for ringing in England, following on from guidance passed down from Number 10, through MHCLG, on to the Places of Worship Taskforce, then down to the multiple interest groups in churches. We look forward to meeting our Church of England contacts Mark Betson and Brendan McCarthy face to face one day, to reminisce about guidance over a pint or two. In the meantime, hopefully they will enjoy their delivery of Bellringers Preserves. We have been touched by all the messages thanking us for the guidance. The beer tea and cake list has now gone onto two sides, while the other list has stayed static (smaller list, but in capital letters).

In stark contrast to recent correspondence in the Ringing World (the reading of which I left to others) was this comment, “Hopefully the wider ringing community will have learnt a few lessons about itself over the last year and that the people who are willing and able to move ringing into the future are empowered and enabled to do so.”

And so to more positive stuff. The Yorkshire Association is taking advantage of the relaxation of restrictions to mark ‘Yorkshire Day’ on Sunday with open ringing at lots of towers and a focus on recruitment. 36 towers have signed up so far and looking at their timetable (which is very well optimised for mobile by the way) some towers are opening for up to six hours! Hopefully such dedication will be rewarded and that this initiative is a success that others can learn from.

This will come a day after the ‘City of London Festival of Bells’, orchestrated by Dickon Love in association with the Diocese of London, when it will be difficult to walk through the City without hearing bells sounding from 20 different belfries – a mixture of quarter peals, general ringing, tolling (Great Paul), and a carillon recital. I like the programme entry “St Margaret Pattens, General ringing, 1 bell.”

A year ago, I knew 60 on 3rds existed, and that some people I knew understood how to call it, but I had not made the effort to study it. Now I have, and although I am yet to call it all the way through it is becoming a useful exercise, and an aerobic one at that. ART is piloting a LtR Call Change plan, which is in line with one of the Council’s own Strategic Priorities that method ringing does not need to be the only measure of success for a ringer. Three bands are going to take part in the pilot with another couple in the wings – I’m going to watch that with interest.

The General Synod discussed the ‘Mission in Review’ report last week. It sets out a plan for changes to how parishes are reorganised and church closure works – relevant to all those anxious about this. It is entering a consultation phase, so we will look at how to get ringers involved either individually or in an overall coordinated response from our community. I picked out this phrase which indicates the scale of the challenge “Four dioceses in our survey were thinking about shutting 152 churches over the medium term (5 years), which would represent a significant increase on recent trends”. Look forward to a review of the report in the Ringing World in due course.

Deputy President David Kirkcaldy and I had a long overdue meeting with a couple members of the Publications team and had a good brainstorm of what might be missing from the ringing bibliography. Philip Green had the temerity to suggest that my own “Judging Striking Competitions” book might be due a re-write! The lack of ringing in the last 16 months has had the knock-on effect of a significant drop in people buying ringing books, but hopefully newfound enthusiasm and lots of new ringers will give a boost. One person checking the guidance last week was about to kick off eight new starters! In the CC Shop, you can buy six copies of the ‘New Ringers Book’ (a book the Birmingham School of Bell Ringing gives to all its students) for only £51 after the bulk discount. What’s not to like?