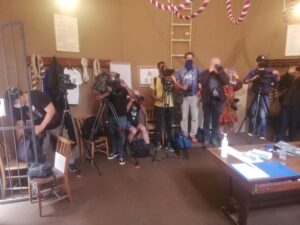 Although it’s becoming old news now, the ringers at St George’s Cathedral Cape Town gained great publicity for ringing following the death of Archbishop Desmond Tutu (see article in last week’s Ringing World). We don’t get much news of ringing in South Africa so this was a welcome spotlight. The world’s press squeezed themselves into the ringing room and film of the local band ringing well struck call changes went out on SABC News.

Bell projects outside the British Isles are supported by the Fred Dukes International Bell Fund. Applications are currently being sought for this year’s grants, and the deadline for submission is 31 January. Details are on the CC website but if you have any questions, please email

Although I have got much more adept at finding things on the CC website, my life has been made a lot easier by work done over the last few months by the small ‘web team’ of Allen Nunley, Bruce & Eileen Butler, and Ian Mozley (sharing three time zones), who have greatly improved the website’s search function including indexing 1800 files! There are lots of useful documents stored behind the website, for instance a huge number of Learning Curve articles so hopefully this work will bring all this to a larger audience.

Being in Torquay after Christmas and hearing a couple of police cars racing along the promenade reminded me of the Basil Fawlty quote “the police were busy yesterday – apparently there was a lot of bloodshed at the Nell Gwynn Tea Rooms.” When your daughter comes back from a local practice with her face covered in blood you do worry about whether you had put her at undue risk. However the cause of this bloodshed was not a fight following a difference of opinion on how the singles in Stedman Doubles work, but a nosebleed which she decided not to tell anyone about, soldiering on behind a snugly fitting FFP2 facemask! So not only are the FFP2 masks better protection from Covid but they also enable you to have a nosebleed without interrupting your ringing.

Further news on continued progress through the new Leadership Safeguarding training as I attended the first part of the training via Zoom. Actually, last week I had two Zoom sessions with people I have not met before. There was this safeguarding training, and a slightly more expensive one with fellow motorists receiving guidance on the safe use of motorways. And here I draw a contrast. In the latter, I felt that use of the word ‘journey’ was not at all annoying. I accept that when I was adjudged to have been going too fast on the M5 I was on a journey – a journey home. However in other contexts few things are likely to wind me up more than the use of the word ‘journey’ (except maybe people posting Wordle results on Facebook). I am not “sharing my Safeguarding Journey”. I am not in fact on any sort of ‘journey’.

It wasn’t too onerous. I made a couple of comments over the course of an hour and a half, half an hour of which was people introducing themselves and having a break in the middle. This was the ‘reflecting’ part of the training, considering what safeguarding means to us and to the church. It didn’t matter that I had not read the Psalm, and I let others reflect on that. Next week’s session is more of the ‘process’, which looks like the old C2 training (which I found extremely valuable).

We are collecting feedback from Guilds and Associations on the different stances Dioceses are taking on the new safeguarding training. Whether or not Tower Captains are required to do the Leadership training is for individual Dioceses to decide, as reported in last week’s Ringing World, which is why we are supporting safeguarding officers in those discussions and sharing knowledge where we can. The reports we have had in so far have seen more Dioceses deciding not to insist on Leadership, but it is a mixed picture.

Ringers are starting to ask about when the ‘official’ ringing for the Platinum Jubilee is, especially as the Palace has now released details of things that will be happening during the long weekend. Although ringers can of course do as much ringing as they like over that weekend, and rare towers are no doubt already booked, coordination of effort will be around the time of the service at St Paul’s Cathedral on the Friday. At the moment neither the Palace nor the Cathedral can confirm the time, so watch this space. Ringing has been announced for the anniversary of the Accession on 6 February, with many towers already planning special ringing for services that evening.

The Young Change Ringers Association held their first event last weekend. A walk around Birmingham City centre provides a rich variety of experience for ringers – not easy of course, but hopefully a rewarding one and the rare opportunity to see 16 ropes in one ringing chamber. Matt Jerome’s team of seven (a.k.a. the ‘Core Seven’) had a nervous run up to the event not knowing whether it was going to get thwarted by Omicron but they were rewarded for keeping the faith when many might have taken the easier cancellation option.

More than 50 young ringers attended, which seems to be a very good start for the fledgling YCRA. In what was probably a first for any ringing event, participant name badges gave the option of including gender pronouns. If you don’t know what this means, or you don’t think it’s important, please do some research. (I first saw the use of gender pronouns on the business network LinkedIn, and learned of their significance from Charlie.)

In the evening, when about 25 of the older Young Ringers retired to the Woodman for a working dinner, I discovered one of the few perks of being Council President. Apparently I am allowed to steal young ringers’ chips. Bonus!