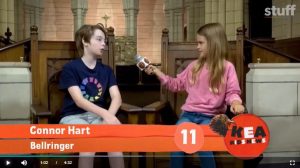 I expect almost all of us are looking forward to the Jubilee weekend, either because we like the pageantry of such occasions, relish the opportunity to do some ringing at a ‘rare’ tower, want to test the new pudding if your local supermarket hasn’t run out of amaretti biscuits, or just have a few days off to do things like watch cricket. One member of my household is off to London to ring in the ‘Big One’ at St Paul’s, while Charlie and I enjoy more humble local ringing activities (and watching cricket).

One thing that was discussed by the Recovery Champions was the possibility of using the Platinum Jubilee for some form of large-scale recruitment campaign. This was decided against mainly because more effort wanted to be put into training more teachers first, and also to spread recruitment over a longer period of time to make it more sustainable.

As I have reported before, a small team has been working on the precursor to a marketing campaign, which is to look at how best to describe and ‘brand’ ringing so that its marketing is more likely to hit the people who will be attracted to it and make good recruits. ‘Good’ means different things to different towers and in different places, so it is quite a complex brief. The brief has been sent to a small number of agencies who are of course very excited by it – marketing agencies always are!

Paul Wotton has been elected as the new Leader of the Volunteering & Leadership Workgroup, building on the excellent work Tim Hine did since the formation of the Workgroups post CRAG. Paul sees gaining ‘market intelligence’ on the state of ringing as an essential part of the plan for helping towers and ringers. He says V&L is “the People function of the CCCBR.”

I spent a couple of hours at the weekend reading some of the report of the 1988 Survey of Ringing – a mammoth undertaking that surveyed a sample of over 500 towers, using 75 volunteers and early computer power. (The survey only covered the British Isles.)

Here are some interesting statistics for comparison: 87% of Tower Captains were male while the Male/Female split of other ringers was 58/42 (that may still be about the same), 62% of towers with bells rang on the surveyed Sunday and that was seen as a worry (I am sure it’s less than that now), and the survey concluded that there were about 41,000 bellringers (we think it is now less than 35,000). But here’s the big one – 25% of Tower Captains and 49% of ringers generally were under 40…

There are plenty of bright lights in ringing recruitment and training though. For example, the re-branded East Riding School of Bell Ringing is expanding with the addition of a ringing centre at Bubwith. How about this for facilities at each of the School’s towers: Six bell simulators, Class rooms, Computers, Projectors and screens, Library, Education book and DVD stalls on workshop days, kitchen and toilets. People travel from a radius of about 80 miles, just showing how much demand there is for structured ringing training.

How many young recruits will be inspired by 11 year old Connor Hart from Auckland, “New Zealand’s youngest bellringer”, who was the star of a fantastic piece on Kea Kids News (“made for kids by kids”). Interviewed by an awe-inspired 8 year old presenter, he reveals how it was a Big Ben Lego set and the thought of the 13 ton bell inside it which inspired him to start ringing. Which just shows you never know what might inspire a youngster to want to ring. I was inspired by wanting to annoy my sister.

Facilitating school trips is one of the purposes of the proposed National Ringing Centre in Northampton (in the morning before the pub opens), with the CCT wanting to combine bellringing with learning about other heritage activities. One thing I had also been hoping for the NaRC is to take the Central Council Library there, or at least some of the most interesting items and collections so they can be seen by more ringers. You may have read in a recent Ringing World the article from Chris Ridley concerning the Library’s future.

There are two significant issues which need to be solved very soon – the need to find a new Library Steward to enable Alan Glover to retire, and the need to move the Library out of Alan’s house. While there were a few responses to Chris’ article, generally recognising the importance of the Library, no potential Library Steward emerged, or, even more importantly, any new ideas for a new home.

If I didn’t have such a large collection of hippos, I might be able to devote space to housing a Library, but even with a recent thinning out, the hippos retain their place. Seriously though, please think about possible homes for the Library – its current space is 5m x 4m with 92m of shelving. It is heated, has natural ventilation and a smoke detector/alarm. Humidity control is a ‘nice to have’.

A couple of things on the Roadshow in September to report. Firstly, the Historical & Archive Workgroup will have a stand to display some interesting things in a sort of ‘Antiques Roadshow’ format. Do you have anything interesting that you could also bring along to display? Maybe a competition jug, or ‘six fine hats’?

Also our two youth-orientated Workgroups are teaming up with the YCRA to run a “dating service” in an effort to guide those destined for university and college this autumn to correspond with the relevant U&C ringing society and/or local tower(s).

My next blog will be post Jubilee, so whatever you and your band are doing to mark this special occasion, post it and link it to the event on Bellboard so we can include it in a collation of all ringing which we will send to Her Majesty. There is a special certificate you can download and use to mark the occasion. Above all, enjoy your ringing.

P.S. An answer to last week’s question. A ‘cat in a fez’ is a treble bob work, e.g. dodge lie dodge.