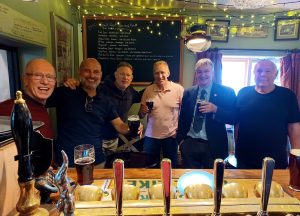 I have launched a Crowdfunding website to enable individual donations to the new Mobile Belfry project. Enough ringers have expressed willingness to chip in for it to be worth orchestrating this fundraising campaign to complete the funding. This is specifically about having a very transportable and realistic belfry (in terms of ringability) that we can get into schools and shows. All information is on the crowdfunder website here – many thanks to Alex Runting for piecing together my different videos, pictures and voiceovers.

School teachers will be used to the mild panic that seems to arise from the arrival of OFSTED inspectors. Cathedrals have been going through something similar over the last few years, with SCIE, the Social Care Institute for Excellence, carrying out safeguarding audits (a complete list of completed audits can be found here ). The comprehensive audits also cover bellringing, and so far, cathedral ringing arrangements have fared well.

Wells Cathedral’s SCIE audit hit the papers for the wrong reasons but the bellringers were highly regarded  – “The auditors judged that the safeguarding practice of the bell tower at Wells Cathedral is good, with robust procedures in place to mitigate against [sic] any risks. The safeguarding policy for ringers was judged by the auditors to be one of the best they had seen.”

Safeguarding compliance is the main current worry of those filling the Council’s ‘postbag’. There are isolated incidents (currently) of tower outings being asked for safeguarding certificates for all participants and the DBS certificates of leaders. Rest assured much work is being done behind the scenes by our safeguarding team.

It’s not just ringers who are struggling with the Church’s new regime, but all sorts of church volunteer groups. I met someone last week who needed to do Leadership training because they have volunteered to look after the Sunday School (to avoid going to the service!), but refused, and now has to be ‘observed’. So she’s going to stop volunteering.

Some Dioceses though recognise that a different approach may be needed for volunteers who are not churchgoers. Winchester for instance has developed a special course which is described thus:

“This course has been designed locally for those roles that don’t quite meet the criteria for the new leadership pathway but require more safeguarding awareness than the Foundations pathway currently offers. This course is currently delivered via zoom and is three hours in duration with no requirement for pre or post course activities to be completed as homework.”

As the search for a new home for the Central Council library continues, I went to Alan Glover’s house in Shropshire to see it. I doubled its visitor numbers for the year. There is much here that is stored because it is not stored anywhere else – for instance row upon row of beautifully bound books of newsletters and reports ordered by society – I think anyone who sees it all would be amazed. I was allowed to hold one of the oldest books in the library, the 1668 Tintinnalogia, or the Art of Ringing, for 17 seconds before Alan started to get nervous and put it back in its fireproof case.

I am even more convinced that there would be more interest in the library if it was more accessible, although that is not meant to detract from the fine job Alan and his predecessors have done to make it available. So the following day I went to see the CCT’s project manager for the Old Black Lion to continue discussions about housing the collection at the proposed National Ringing Centre in Northampton. There are options.

Is anyone using Spond to organise ringing? I have had it recommended from a number of sources. It’s used particularly by sports teams to organise teams and events and takes away the difficulties associated with organising participants and parents over different types of device, something any youth team leader will be able to relate to! We are planning to give it a go for organising the ringing around the CC AGM.

An idea that is coming to fruition is the “Summer School”. Concept: a summer camp where young ringers who are about to go to university get taught to teach, and then immediately teach more young recruits who just want to learn, all wrapped into a single event. This means they get to uni already having teaching experience and more confidence to teach other freshers. The Schools and Youth groups Workgroup took it on, in association with the YCRA, and it’s happening. 12 young ringers have signed up for the teaching course on Friday 9th September in Bristol with a follow up on Saturday 10th when they will get to practice their skills. A good plan coming together nicely (and delegated well).

My trip to the Devon Call Changes Major Final was well chronicled in last week’s Ringing World, but to summarise – 16 hour round trip, met some online friends for the first time, was apparently referred to in hushed tones as “there’s someone really important here called Simon”, was made very welcome, ate largest ringers tea I have ever seen, rang in Judges Peal, spoiled my smartest trainers in cow field, competition decided by the raise and lower on difficult bells, Combeinteignhead won again, top day out.

I am looking forward to two more big striking competitions are coming up on consecutive Saturdays. Both the 12 bell final at Guildford and the Youth Contest at Exeter are mammoth logistical undertakings, months if not years in planning. Shout out in advance to the volunteers – RWNYC will have a team of 70 helpers, and I can only imagine what some of the spreadsheets must look like. At Guildford there will be over 100. These have become events that bring many ringers together to enjoy good ringing while generally catching up. I have had so many discussions in the last month cut short with “I’ll see you in Guildford so we can discuss it then” I think I am going to be busy. I might even make it home without incident…