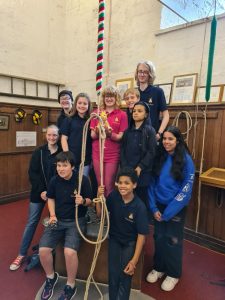 I’ll open with another appeal for help, this time on behalf of the PR Workgroup, which desperately wants a few more members to help with ringing promotion. Does the Workgroup name make potential candidates feel they need to be PR professionals to join? They don’t. The Workgroup leader Vicki Chapman works in a hospital. She and her group members are just interested in helping to promote ringing directly and indirectly. Hundreds of ringers do that every week so could anyone spare some of their experience and time?

If indeed I am some sort of ‘influencer’ as suggested in the letters pages of The Ringing World, I wish I could influence people’s propensity to volunteer a bit more. My last two Saturdays’ entertainment, the 12 Bell Final and the RWNYC showed that people do volunteer to do things they believe in, so in ringing it is important for us to be doing things that our fellow ringers want. In my home St Martin’s Guild a few years ago we just stopped doing the things that weren’t well attended (meetings), and organised different things that work better (bellringing). You cannot flog dead horses. Workgroups focus on the things we think are going to work and we enjoy doing it.

One of my lockdown discoveries (I was fed it every Saturday evening) was the ‘Marvel Cinematic Universe’, including the highly surreal WandaVision. There is a phrase used a lot by the fundraising townsfolk of Westview “for the children” (chanted in creepy unison). Last week, as I was deep in organising a RWNYC team’s final practice and travel arrangements and maybe remarking on how much work it was, I was told we do it “for the children”. Those who organise ringing for young people do so with far more obstacles put in the way then I can imagine were there when I learned. But we must keep doing it.

What a day the RWNYC turned out to be! I was asked by one of the team leaders which was my favourite day – this or the 12 bell contest the week before. As I was in the middle of running six 50 minute Cathedral ringing sessions with about 30 young ringers in each I wasn’t too sure, thinking back to the relative calm of the Guildford beer tent, but on the train home, in the company of excited young ringers treasuring their medals and starting to think about their tactics for next year, I concluded it was definitely the RWNYC.

While by its very nature, the RWNYC was about young ringers, the 12 bell contest also had a very young vibe. Lots of the bands had young ringers in and I thought it was notable that there was a lower average age than at most other ringing events I go to. I went to Guildford with a long list of people I wanted to talk to on Council business, but in the end it was good just to catch up with Workgroup leaders, workgroup members, Past Presidents, and many people that I now know who I didn’t used to know.

Leading the way in surrounding business meetings with lots of ringing, ANZAB has just had what looks to have been a great Festival in Sydney with an AGM tucked away. The North American Guild is planning its AGM in Raleigh in October. That ring of bells is going to get heavily used for that weekend! When you see how far it is from Raleigh to the next nearest tower you realise how lucky those of us who live in Britain are.

The annual Robert Kilby peal got rung, with the Peterborough DG taking on the challenge of ringing a peal of Stedman Caters with at least one first (conductor in this case), in return for expenses being paid and a little bit of glory. https://bb.ringingworld.co.uk/view.php?id=1525131. Offers are open for a band that wants to take on the 2023 attempt.

A delivery of aluminium to Taylors Bellfoundry marks the next progress on the creation of the new Mobile Belfry, as the Crowdfunder campaign continues to pick up donations https://www.crowdfunder.co.uk/p/mobile-belfry. After posting the link on my own Facebook feed as a ‘soft launch’ to get some early support, only to receive nothing but criticism (there is a strange definition of ‘friends’ on Facebook), I have been very encouraged by the donations that have been received since, with a couple of complete bells paid for, quite a few donations of £250 in return for early bookings, and plenty of other donations that will be acknowledged on aluminium. Please keep them coming!

I was very sorry to lose the services of Mark Regan as Senior Stakeholder Liaison Workgroup Leader. Mark played a key role particularly in the early days of the pandemic, finding the right people to speak to at the Church of England, and then nurturing the relationship with the Church throughout that difficult time. He has also developed stronger links with other key groups such as the Church Buildings Council. This is a role we will formally advertise but if this is the sort of area where you think you could help the Council (and thus ringing generally) please let me know.

Finally I have a picture in my mind of a sort of ‘ringing family tree’ where everyone would say who taught them, and who taught their teacher, building a picture of which people sit at the top of the most branches, directly and indirectly creating the most ringers. Not particularly useful, but interesting nonetheless. How far back can you trace your ringing teacher ancestry and who is ‘related’ to you? A trip to Phil Gay’s small ring at Woodlands was the opportunity to lose a peal with one of my two teachers, Geoff Pick, whose is retiring with his wife Linda from 50 years of teaching ringers at Cannock, most of them teenagers. Their influence has been immense. https://bb.ringingworld.co.uk/view.php?id=1527207

P.S. Cornish Pasties – winner of ‘Best RWNYC Team Name’, as voted by the Brumdingers on the way home