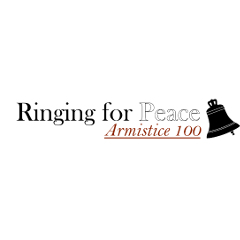 We know many of you are eager to have some guidance on next year’s Remembrance Day ringing (for and around 11th November 2018) but, as ever, there are so may considerations and people we need to talk to – so it’s great if you can bear with us in the meantime!   But we do have a lot to say and to share already, and we hope this will mean that the 100th anniversary of the end of the Great War will really be something special.

More than 1,400 of our bell ringing community laid down their lives for peace in the ‘war to end all wars.’  We know in retrospect that wars were not ‘ended’, but we also know that there is an ever increasing movement to address this.  Our fallen bell ringers came from all walks of life, as we ringers still do today (from skilled workers to academics to business people – you name it!), and today we are all united in wanting to ring out a message of peace around the world.

Many of you have been asking: for 2018, the 100th anniversary of Armistice Day, how will we make this really special for bell ringing?  Here are a number of things we would like to support and help you in (and of course get your support for):

So, in summary, we suggest half-muffled ringing in the morning to tie in with the normal solemnities and, where possible, to ring open at other opportune moments during the day (with more to come on that in due course).  We are looking at how to acknowledge the various efforts made around the world, eg in the form of certificates for the various activities (there is already one available to download from Battle’s Over).  And you might want to consider a community lunch or social between ringing, – why not make this a really special day for your whole ringing (and broader) community?

To input your ideas for things to ring to commemorate our fallen, or indeed Ringing for Peace for all levels of ringing and numbers of bells, please write to armistice100@cccbr.org.uk.  We will then share what we hear on the CCCBR website, in the Ringing World and via other forms of communication.

To find out more about Battle’s Over and sign up to ring at 7.05pm please give your details to: brunopeek@mac.com

ALSO, and finally: a call to all towers to check their muffles, and order more NOW so that you’re not caught short!

PrevPreviousAnother 1st for Children in Need – method by Tim Attride
NextRinging for Peace: Armistice100 in the news this weekend – spread the word!Next
Facebook Twitter Youtube Envelope