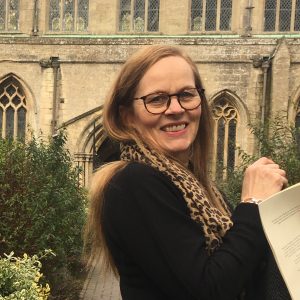 Rising to the challenge

Little did I realise three years ago, when I volunteered as a helper at the Central Council Annual Meeting, hosted by the Winchester & Portsmouth Guild, that I would find myself writing about taking on a role as an Executive Trustee within that reforming body.  I didn’t know what the Council was, I asked around and was met with a variety of opinions. It seemed the only way to find out was to immerse myself in it. I applied to join the team called for after said 2016 meeting – ‘the future of bellringing needs you’ caught my attention in an ‘email to all’ from our Association Master.

Having not long ago discovered this immersive hobby I was sufficiently intrigued to investigate further why it might be in danger and once I’d started digging I was hooked.  This was way too precious to lose. Locally I discovered I was in a District, which was part of an Association that was one of many such geographical organisations affiliated to the Central Council.  I paid my £8 annual membership but wasn’t really sure what it was for.  It seemed like a pretty inexpensive and rewarding hobby to me once I started finding out just how much I could do on the ringing circuit if I wanted to. I benefited from hours of patient teaching from the Tower Captain, and found once I could ring basic rounds and call changes I was welcome in most towers around the country, on practice nights and for Sunday service.  I realised there were Guilds and Societies too, depending on their origins, and they all had an astoundingly rich but quite singular history.  I discovered some fantastic buildings, soaked up the heritage around me and am immensely proud to be continuing a tradition hundreds of years old.

However the disconnect between me, the new ringer, and the esteemed establishment created in Victorian times by respected gentlemen bellringers, only really became apparent when taking on the Public Relations role within the CRAG team (Central Council Review Action Group if you’re new to this bellringing world, as I know 3,000 odd ringers are, so I’m talking to you too), I attempted to contact as many ringers as possible by as many means that were available to me, to commence a broad consultation on how best to reform the Central Council, to make it fit for purpose, more relevant to modern society and to help ringing survive and thrive.  You may well laugh, but it was a revelation to discover such a large group of connected people (30,000 ish) who are not, connected. I’d like to thank all those who met my earnest endeavours with patience and understanding as it’s not easy to see things from someone else’s newbie point of view when YOU know something, without knowing how you know it, it just IS. I found some of the exchanges along this road of discovery pretty character-building but was privileged to work with a very dedicated and thorough group of people on the task we had committed to.

The Council voted to adopt those recommendations. It was a new idea to invite ‘rank and file’ ringers who were not Council Representatives to join the review group, but an essential part of the modernisation process to introduce fresh new blood and ideas from outside the establishment, to look and suggest with fresh eyes.  It took some getting used to, but like anything new, is getting easier as greater numbers of new faces and ideas are contributing to the groundswell that was set in motion with the next vote, in Lancaster 2018, when the reform was approved, and I joined the continuing Executive Officers: President, Deputy President, Secretary and Treasurer, as one of the four new Ordinary Trustees under the Revised Constitution.

The Executive (https://cccbr.org.uk/about/executive/) is responsible to the members, for the general running of the Council. It holds regular meetings during the year and is in contact by electronic means between meetings. Executive members, who are also the trustees, are directly elected by the members. They retire in rotation and are limited to a maximum of six years on the Executive unless the members resolve otherwise at an annual meeting. The Executive appoints the workgroup leads and individual Executive members act as sponsors for workgroups.

The role of the trustees is to exercise oversight over the affairs of the Council on behalf of its member societies, to make sure it is financially sound and to set the overall strategic direction.   I never forget that the impressive things which have been done so far this year, about which I am expected to “exercise oversight”, are all done by volunteers, who give up huge amounts of time to the service of ringing.  Often the main role of the Executive is simply to act as the Council’s central nervous system and to bring people together at the right time.   It’s not a question of ‘top down’ and for this reason working on the Executive is much more enjoyable than I thought it would be.

A huge amount of work has been put in by Workgroup members, Tim Barnes on the new Methods Framework, Doug Davis on the new website development and Alex Fishburn, who has taken over support for Bells on Sunday spring to mind.   There’s always room for more people to contribute of course and the more offers of help, the more the Council is able to achieve for ringing.   As Christopher O’Mahony recently highlighted, it’s very much a case of “ask not what ringing can do for you, but what you can do for ringing”.   Look out for further articles about the work of the different workgroups in future editions of the Ringing World.

One of the innovations this year has been quarterly face to face meetings of the Executive and Workgroup Leads.   These have been invaluable.   The format is smaller than the old Admin committee and meetings are more frequent (and last a little longer) so they have been extremely useful opportunities for discussion, information-sharing and decision-making.  Everyone feels slightly challenged, but that’s a good discipline as the main purpose of these meetings is to ensure the trustees, acting on behalf of the Council’s member societies, have good oversight over all the work going on and are able to probe a little where necessary.  Sometimes the non-verbal language at these meetings is as useful as what people say, meaning that they are much more productive than a phone call or Skype session.

At least two members of the Executive team retire each year to maintain accountability but also to generate interest from the ringing community in contributing to this essential role.  There are now opportunities for people who, like me, might not have considered or have been considered, to join the ranks of the Executive team of the Council, but have a valuable contribution to make nonetheless, and their voices and commitment are actively sought.

Becoming a trustee at this point in the Council’s history has been especially challenging because of the impact of the Ringing Remembers campaign.    All three of the major ‘residential’ courses this year have felt the impact of our new Ringing Remembers recruits in terms of applications for places, particularly in Foundation skills.   One of the important areas of discussion at the last Exec and workgroup face to face meeting was the extent to which the Council might help to enhance capacity for Foundation skills training, working with existing organisations and guilds.

The CCCBR is in a unique position to promote ringing with government and to co-ordinate in the planning of national events where ringing can contribute.  This needs to be a two-way dialogue and it is slow progress, but there is a real role for the Council here.  With the tragic Notre Dame fire, the Prime Minister’s and the Archibishop’s offices said somewhat different things, leading to a degree of confusion.  How much better that could have been if they had both engaged with the Central  Council?   Thanks to the involvement of Alan Regin and Vicki Chapman there was better engagement with MHCLG (the Ministry of Housing, Communities and Local Government, formerly the Department for Communities and Local Government)  and DCMS (the Department for Digital, Culture, Media & Sport) with the Armistice 100 ringing, meaning that the door with government is now more often ajar than it is closed.    A real test will be the level of engagement achieved in the planning for the 75th anniversary of VE day in 2020.  Christopher O’Mahony, who has indicated his desire to retire from the post of President of the Central Council, has been a wonderful ambassador for ringing; it has been a great pleasure to work with him. Bellringing now enjoys a warm relationship with government and a wide variety of organisations.  It was an honour to attend the reception held by US Ambassador Johnson at Winfield House 9th May 2019 for ringers in diverse leadership roles across the UK.

London 2019 (the Council’s weekend at Goldsmiths College, London on 7th/8th September) sees a new type of Council Annual meeting, with the Sunday devoted to a programme of speaker events, demonstrations and ringing opportunities of interest not only to Council members but to the ringing community as a whole.   It is the first time for many years that the Council has planned such an extensive programme of speakers and stands alongside its own annual meeting, so please support it!   Those who have seen Steve Coleman’s talk on ringing during World War 2 tell us we’re in for a treat.   The booking form can be found on the London 2019 page of the Council’s website at https://cccbr.org.uk/about/annual-meetings/2019-meeting/.

There were a number of inspirational speakers at the ART Conference at Worcester in March including David Hull’s excellent talk about Youth Ringing on the Sunday, which was organised by the Council’s Volunteer & Leadership workgroup for the second year running.  Lesley Belcher, ART’s new chair will be returning the favour by speaking on the Sunday of the Central Council weekend in September, the title of her talk is “What has ART ever done for ringing?”   It’s quite incredible to think that ART hasn’t been around that long, but in its short life the answer has to be “quite a lot” – I don’t fancy her chances of fitting it all into an hour!

One recent change which the Executive agreed at its meeting in May, was that Phil Barnes and I would swap our ‘portfolios’.   Whilst he will now focus on communications (including website), I have taken on the strategic work focussing on ways in which the Council can introduce a more compelling offer of direct membership for individual ringers. This is a long-term ambition and there are many ways to take it forward.   I am grateful for an excellent strategy paper which Phil wrote last year, but I am also interested in your views.   This is not something to be rushed, but important to get right, so do contact me direct at membership@cccbr.org.uk if you have any thoughts or ideas as to how this ambition can be taken forward.

Nominations for Executive posts need to be in by 6 weeks before the 2019 meeting, which is for the first time ever, in September, away from the traditional May Bank Holiday, so that’s 27th July, which will be here sooner than you know so crack on and find your proposer and seconder.  The 200-word supporting statement is not essential, but if there are a number of nominations those with the most votes at the meeting get the job, and to me it makes sense to set out your store if the Council Members are to vote for your contribution.  Here is a link to the Formal Notice of 2019 Annual Meeting https://cccbr.org.uk/2019/06/06/formal-notice-of-2019-annual-meeting/

Good luck and see you at Goldsmiths!
Alison Everett

© CCCBR.  Material on this website may be freely used for any purpose in connection with the promotion of bell ringing. For any other purpose please contact us.