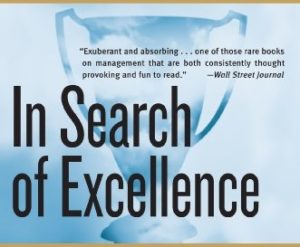 In Search of Excellence, by Tom Peters, had a profound effect on my life. I read it in my final year at university instead of reading the books about Electronic Engineering that would have got me a better degree. This seminal work on business management made me pursue a career in business rather than engineering.

Excellence is a difficult word. There isn’t really anything between ‘very good’ and ‘excellent’. Of all the words that are in our new ‘Strategic Priorities’, this is the one that will make some feel uncomfortable. Excellence is pretty difficult to achieve. Even the very best bands don’t hit excellent that often, when judged by their own standards. Striving to do our best though is what can bind all the different strands of ringing together, from those whose ambition is to provide a service to the church and nothing else, to those who push the boundaries of method ringing, and those who compete in regular call change competitions. I don’t believe there is anyone who doesn’t prefer good ringing to bad – who wouldn’t rather be in the good ringing than the bad ringing.

Plus it’s not just about attaining the highest standards of performance that we can manage. Many potential ringers are lost and many ringing performances seriously sub-standard because of the poor conditions and environments in some towers, so we should also be looking to make our tower operations and tower infrastructure as good as possible. So I am going to stick with excellence even though we rarely experience it. It’s worth aiming for.

Earlier this week I met Pat Wheeler in Nottingham to discuss preparations for the Nottingham weekend in September (4th to 6th). What used to be called the ‘Central Council Weekend’ has been repositioned both in terms of style and time. In an effort to make it much more of an open festival of ringing, it combines a Roadshow on the Sunday with the annual gathering of Council Representatives on Saturday. Friday will have ringing at lots of towers but it will not be a tower grab – it will be focused ringing for different levels or pathways. Both Friday and Saturday evenings will be social events kindly organised by the Beeston ringers.

You may remember the Ringing Roadshows, which showcased all sorts of ringing activities, products, suppliers and of course ringers. They were a great melting pot of ringers from all spheres of the ringing community. That is what we would like the Roadshow in September to be – a day when it will be worth going to Nottingham to meet fellow ringers, see things you have not seen before or learn something you don’t know. More about that soon.

It is a long time since I have seen Dave Kelly from the Keltek Trust so it was a pleasure to meet up with him and his wife in Kings Heath, next to the church in which I hope we can put a light six to suit all our young local bellringers. I learned that the Trust currently has 100 potential projects looking for bells!

One of the churchwardens at All Saints Kings Heath turned out to be a lapsed ringer, who had given up when she thought she wasn’t any use because she would not be able to learn methods. That highlights two problems we should address. Firstly, someone who only wants to or is only able to ring call changes has not failed. No one in Devon thinks they have failed if they only ring call changes. And then there are lapsed ringers. How about we find one person who has lapsed and persuade them to come back? They might not want the commitment of becoming a member of a local band, but they might come and help at special practices and thus help others. That’s better than them not ringing at all. I have spoken to three in the last few weeks and all said they might consider it on that basis.

Although this is not really CC business, I have finally finished the draft ‘Project Pickled Egg’ book and sent it off for editing. The plan is for it to be published by The Ringing World and be ready for the RWNYC (because I think there’s a market there). Once that is done, I want to work on a more entry-level version that covers the transition up to Surprise Major, and what the stepping stones and pathways are. Double Norwich …

I started a Facebook discussion on trying to assess whether anyone has lost 1,000 peals. I came to the conclusion is was probably Paul Mounsey, who has rung 4,777 (good proportion in hand and relatively ambitious for a prolific peal ringer) and so will have lost 1,000 if his success rate is less than 83%. Sat next to him at the Meyer/Mills wedding and he thought his score % was about 80 so we have a winner! It might have been Bert Prewett though. Given he had rung nearly 1,000 by 1918, including handbells peals, he may well have lost more than he got. We will never know.

The day after the Golden Oldies rang Bristol Maximus with an average age of 75, my highlight this fortnight was Variable Treble Chandlers 23 Spliced. This previously un-rung composition has the hunt bell changing almost every lead. There have been a number of attempts at making the already tough Chandlers 23 spliced more difficult, and this one is right up there. The Golden Children may find ringing easy generally, but behind these technically challenging peals is a large amount of solitary homework, done by ringers who have developed their own strategies for learning and executing methods extremely well, underpinned by mutual trust that everyone else will also have done what’s required.

I would never have read 1000 words from the President of the Central Council before now and I wouldn’t expect you to either. I have hit my self-imposed wordcount limit.