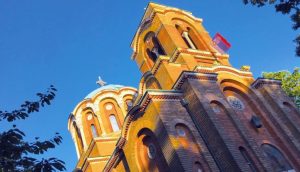 Last Friday was definitely a low point. There was much swearing in Moseley, Worcester and Wrotham when an ever-so-polite email dropped in from the Church of England Recovery Group asking us not to ring that Sunday after all. Then my computer crashed just to add to the misery. The next morning, we had a call with Mark and Brendan but it was clear that they wanted us to change our guidance and wait a bit longer.

I am not sure what percentage of churches did actually hold services in England on Super Sunday. There weren’t many in my home Diocese of Birmingham and I have heard of some particularly rural areas where there is no sign of churches opening for some time. Across the world the picture varies – ANZAB reporting 20 out of 64 towers open again, while in North America I understand a little ringing has happened at Orleans, Honolulu and Kent School. The Channel Islands and Isle of Man are relishing their Coronavirus-free isolation!

The prospect of ringing three for services caused Ann Davies to recall the words of the Serbian Orthodox priest in charge of the ring of three at Bournville in Birmingham (pictured) when three ringers (suspects include Messrs Pickford and Jones) asked if they could have ‘a little tinkle’. The custodian of the ultra-ungettable tower said “we ring for ze purpose and not for ze tinkle!!”

As work starts on the next stage of guidance it is difficult to see how things are going to change materially without infection levels dropping. However there are lots of factors to consider, including that not all ringing environments are the same. We’re also getting a group together representing prolific peal organisers to pool our thoughts on when and how we can move towards ringing’s longer form.

Now to some good news. The Churches Conservation Trust has launched its ‘Champing’ offer – 20% discount for ringers booking before 31st July (use the discount code BELLS20). Champing is like glamping but kipping down inside one of their churches for a slightly surreal night’s sleep. Note that most of these churches do not come with showers so those booking for more than a few days will be thanked for not going within 2m of anyone else. Team Linford has booked to stay in the Church of the Holy Sepulchre, Warminghurst so we can visit Charlie’s adopted sloth, Flash, at Drusillas Wildlife Park.

If you are looking for more YouTube viewing after watching all 40 entries in the June YouTube competition, Steve Farmer has put together a superb series of videos on how to use a simulator. Search YouTube for “Practical Simulator Sessions” and you will find these, excellently produced in his garage (which to be honest needs a good lockdown clearout…)

Chris Ridley has been confirmed as the new leader of the Historical & Archive Workgroup. Chris has had a long association with the Council Library and other initiatives and is looking forward to developing this Workgroup so that our history and archives are able to inform and support other areas of the Council’s work. For instance, it has already been shown that the study of genealogy can get descendants of ringers wanting to learn and follow in ancestors’ footsteps.

The first peal on Ringing Room has been rung. Is it surprising that it has taken so long, or that it has been done at all? I cannot say too much as I was in it, and this is not a forum for me to blow my own trumpet. Oh go on, maybe just a bit –  Parp parp!

We have launched a consultation on ‘Registered Smaller Societies’ which is a proposed change to the Council Rules to enable bell ringing societies that don’t have the 75 members needed for full affiliation, but which want to be part of the Council. Not all ringers and ringing are covered by territorial societies, and to be truly representative the Council should embrace smaller emerging groups. More details can be found in the Governance section of the website.

Booking some more holidays. Sign of the times that when we would have been heading off to the Far East for a tour of Vietnam and Thailand, we have booked a boat on the Llangollen Canal and made sure that it has three decent handbell chairs. Twin holiday focus of Latin vocab and Kent Minor.

Matt Lawrence from Lilleshall has joined V&L and taken on a “Recruitment and Retention” brief. Matt masterminded the R&R workshop at the ART Conference on behalf of V&L. There is also a new Facebook group called Bell Ringing Recruitment and Retention – some people have actually managed to recruit people into ringing via Ringing Room and will be looking forward to converting them into tower bell ringers. Just shows what’s possible if you try.

The second of my three favourite ringing days of the year didn’t happen, following on from the 12 bell final. The RWNYC would have seen hundreds of young ringers gather in York for this annual festival of youthful skill and coloured team shirts but alas we will need to wait another year.

Patrick Deakin has started the latest of his Facebook competitions where people vote for their favourite ring of bells in a particular category, starting off with 32 and deciding each round on a knockout basis. Following victories for York Minster in the Heavyweight 12 bout, and Inveraray in the Cruiserweight 10 bout, he is now pitching ton-plus eights against each other in the Super Middleweight category. Will it be one of the Somerset classics (i.e Chewton Mendip) or a young pretender? Watch the drama unfold over coming weeks.

Finally some sad news. The Black Bull at Frosterley, home to a ring of 12 with a tenor of 0-2-21 by Matthew Higby, has closed permanently. Hopefully a new home will be found for the bells, on which seven peals have been rung (but not one by me so I am still keen).