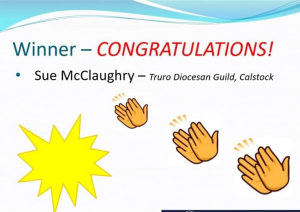 There were a couple of salutary lessons this week on what the future may bring. St Margaret’s Westminster, home of a ring of 10, closed for public services forever on economic grounds with the congregation ‘moved’ to the Abbey next door. And then, of indirect significance, Sheffield Cathedral announced the disbanding of its choir, to start again from scratch with a ‘fresh vision’. We also heard of a couple of towers where bands will not ring again, one because there are no longer going to be services and another because its members are too old to return. We may need to start thinking about a future that could be very different.

The wearing of facemasks, which had previously been “strongly advised” in the Church of England, becomes mandatory in England from Sunday. While this is possibly the final straw for some people (“I am not going to go and ring for 15 minutes and wear a ****** mask”), there are plenty of people who do want to ring, including those newer to bellringing. My kids group, the Brumdingers, will ring for the first time next Sunday and the excitement levels have gone off the Richter scale.

The passing of Dennis Brock was announced shortly after my last blog was posted and he has been widely mourned. Dennis was well known as the oldest active bellringer, having been a loyal member of the band at Sunbury since the age of 11. His ringing for his 100th birthday was covered by national media.

The presentation of the Westley Awards for Church Bell Maintenance went ahead last week, hosted by SMWG. The award is for someone who has become involved in belfry maintenance within the last five years, and shows the most commitment to developing and using their own skills and those of others. Seven of the eight nominations were under 25, with a couple looking after bells whilst at university. The winner was Sue McClaughry from Calstock in Cornwall who has quickly gone from being a new ringer, to a new tower captain, to getting involved in bell maintenance because no one else was able to do, to leading a local rehanging project. She is now a Truro DG bell adviser advising other towers and PCCs. My daughter will add you to her list of inspiring women!

ART has published nearly 50 bell maintenance videos on YouTube, which have been edited and filmed in the last three weeks. They can be found in the ART Online Learning Channel. Like it or not, YouTube is where people go for instruction manuals these days. I have lost the instruction manual for my car six months after buying it but solved the problem of turning off the G-force meter by asking a passenger with YouTube on their phone. Trial and error was only making matters worse.

A late flurry of entries for the July YouTube competition took the number of candidates for “Best ringing on eight or more bells” to 21. Birmingham submitted a few pieces as the closing bell creaked into action, and the Devon call change ringers are once again strutting their stuff. The playlist can be found on the CC website. The judges this month are Wendy and Graham Bloom from Leeds. When I was a young ringer at Cannock, Wendy (then a Smith (always a Smith?)) was a member of the indomitable Lichfield Cathedral band that won our local 6 bell striking contest every year. That band was one of my early inspirations.

Laura Goodin’s “Ringing Room Take-Hold Lounge” has signed up it’s 600th member. The Facebook group acts as a melting pot for those wanting to ring together on Ringingroom. Last week Ringingroom had 3700 unique users, 85% of them from the UK. Many of the rest are from the US, Ireland, and Australia, though there is representation from several other countries as well. If you are looking for the quieter times, avoid Monday-Wednesday evenings, UK time, and Saturday late morning. There is no hour of the day where there isn’t at least someone on Ringing Room.

The use of simulators has come on leaps and bounds in lockdown. Has anyone considered whether it would be possible to deliver a ringing experience in a VR Headset? Does anyone have the knowledge or skills to say how difficult it would be or what it would cost to develop? It would really crack the peripheral vision aspects of ropesight on simulators.

Situations vacant. We are looking for someone with experience in venue or events management/promotion to get involved in a specific project. Contact me and I will let you know what it’s about – it’s a bit Secret Squirrel at the moment.

Westbury saw off a strong challenge from Ebbw Vale in the Facebook contest for best heavy eight. Jewry and Chewton Mendip (my favourites) fell at the semi-final stage. As with previous contests this one has stimulated much debate and banter. Patrick Deakin has now handed over organisation of the contests to Jack Pease, who has wasted no time in launching “Finest rings between 30 and 40cwt”. It’s worth subscribing to ‘Bellringers’ Facebook group just for this.

Mike Shelley talked again in the Ringing World about the Central Council not representing one and two bell towers and practitioners of chiming. I did raise this at the Council Executive meeting last Sunday because I thought it was a question worthy of some consideration. The Council’s member associations focus by and large on four bell towers and above – sometimes threes if they have a band. But not ones and twos, even if hung for ringing. Is there still a ‘Three and Four Bell Society’? Do enough people care about ringing on less than three to form a separate interest group and even society?

And finally, I am going to ring a church bell this Sunday for the first time in five months. I had a 15 minute workout on the bells in Phil Gay’s garage last Sunday (including mask) so I am all set.