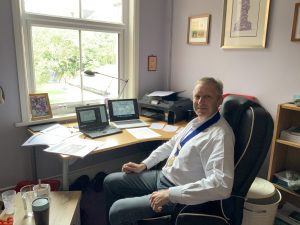 I nearly got off to a bad start. At 10am someone asked on Facebook what time the meeting started and I replied “11”. Then I thought I had better check and it’s just as well I did … I hastily deleted my Facebook answer lest it made anyone think I didn’t know what I was doing, and accelerated my preparations!

The technical set up on my desk had four devices – Laptop 1 for main interaction, Laptop 2 to monitor what non-panellists were seeing and on which I could see the chat, an iPad for social media comment, and my phone for other messages. Then a copy of the Rules, Standing Orders, meeting papers, all my notes, scribbled bits of paper with my responses to the 10 worst things I could think of anyone asking, and a side table of refreshments. What could go wrong.

Well I didn’t bank on having internet issues. I never have internet issues! 250 hours of Zoom and Teams calls in the last six months and I have not once had my internet go down. Thanks Mr Router for deciding to wobble during the Workgroup presentations. I don’t know how it looked from outside as the President disappeared but it was a nine on the brown trouser scale from where I was sitting. David Kirkcaldy effortlessly stepped into the breach and kept things moving while I just prayed.

Chairing your first Council meeting is probably daunting for any President. Most in the past have been in the co-pilot’s chair for the previous three meetings and seen how to fly the thing. And then despite having to sit in front of up to 200 faces, at least they could see them. In fairness I had not been looking forward to it.

The family had been packed off for the day. I had dropped Eleanor off at the airport first thing to fly up to Edinburgh to retrieve her stranded car, while Charlie had gone off with friends to the local Nature Centre with the hope of seeing the sloths in action, if that’s not an oxymoron.

It was a gentle start. All the early business is fairly routine and it turned out that it was quite easy to monitor the ‘room’, see who wanted to speak, get them online and set up and take all the votes. Colin Newman was behind the scenes pulling the strings, enabling people to speak as needed and managing the voting process. It was going pretty well and the needle on the panic meter was still.

The Workgroup presentations were good, with lots of engagement from the room, questions, helpful suggestions, and even offers of help. This was what it was supposed to be about. I delivered the Forward Plan 2021 and it was still going swimmingly. We were however sailing inexorably towards the crunchy piece of business – Small Societies.

Panic meter hits redline. We were approaching the time of the start of the Ringing World AGM, in the middle of the trickiest bit of business, and it was clear we were not going to finish in time. I was messaging David Grimwood with no success, but then got Will Bosworth on Messenger. Then I saw in chat that the Ringing World AGM could not be delayed as it was a statutory obligation. So I just said to the meeting “I am not sure what to do”. Honesty tends to work. Fortunately a disembodied voice from Past President Jane Wilkinson rescued me with “Mr President you could just adjourn the meeting”, followed by a supplemental “Just make the decision from the Chair”. Note to self – Jane Wilkinson added to the ‘beer tea or cake’ list.

I will leave David Grimwood to do his own sketch of the RW AGM. I think it’s fair to say it had its moments. I wasn’t completely concentrating as I was phoning Executive colleagues to agree how to deal with some issues such as members not knowing when the meeting would restart and that we might lose people. Colin in the background was making sure the original Zoom invitation was going to work again, and I was emailing the allmembers list to let people know what was going to happen. In the end we got almost everyone back, and just a few apologies from people who had assumed a Zoom AGM might be shorter! The ANZAB members were already in the small hours of the morning (I am sure they were still attentive though).

The resumption started badly. I had made myself a really large cup of tea that had a chance of going the distance, leaving the teabag in for extra strength, but then just as we started the meeting realised I had forgotten the milk. So it was a tea-free session. And then I forgot to shut my study door and was joined by 40% of our furry friends who had a difference of opinion as to what time their tea was.

Anyway, we picked up where we left off, had a forthright discussion of the Small Societies proposal, which was running the risk of drifting on before I started seeing people in the chat saying things like “Let’s just get on and vote”, so I bit the bullet, called for the poll, and it went through with about 75% in favour.

And that was pretty much it. Colin shot to the top of the ‘beer tea and cake’ list (even overtaking Jane Wilkinson), the new Treasurer made his first mistake in suggesting that there was no budget for said list, and we finished at 4.30.

So lots of positives really. Many aspects of a Zoom meeting are better, the saving for Reps of not having to travel would be many thousands of pounds which associations can keep, and I suspect the format enables more people to feel they can speak. But we are social animals at heart, and I am sure we all look forward to actually meeting each other in person again.