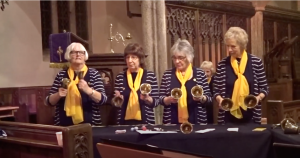 The Pillaton and St Mellion Handbell Ringers have been declared the winner of the August YouTube contest with their performance of Plain Bob Triples.

The judge was Pippa Hyde, a teacher of mathematics and music at Cobham Free School (introduced by pupil George Hart). Pippa had the following to say in making her judgement:

“What a fascinating task! Maths and bell-ringing sounds like a bizarre combination, but makes sense now, and it’s interesting to see all the different named sequences (please excuse my loose use of terminology).

Judging between such varied presentations is probably impossible, especially given my paucity of knowledge, so I imposed some arbitrary criteria to help me. One was that I liked the idea of it being a recent performance, rather than an older one, although it was also interesting seeing the 78 version, as well as some impressive older live performances. A second was visual interest/presentation, and a third was to try to find performances I liked for different reasons. My results are:

Winner: video no. 1 – by the Pillaton and St Mellion Handbell Ringers; I found this easy to follow and very clear, and nice presentation too. Really good that all the ringers were facing forward (although I can wholly understand facing each other, routinely) but it seemed a very clear, unfussy but well-put-together performance. Well done to the ladies!

There were three that I felt should be highly commended – and here my personal preferences probably show my ignorance more than judgement, but still….

My second-favourite performance was the ‘Covid Mitigations’ video by Phillip and Sheila George – ‘Nutbells’ – which was both slick and whimsical in its wry (?) use of face masks and social distance; I also liked the brief jingles at front and back.

My third was the technical representation of ‘Blueline visualised’ which, to me, was more clearly explanatory than some of the other technical solutions, and attractively subtle to watch.

I also rather liked the ‘Handbell stadium’ presentation with its sharp-suited, sunglass-wearing gangster-type ringers.

I do hope these results won’t put anyone’s noses out of joint; I really am fairly clueless about bellringing, but I’ve really enjoyed my opportunity to explore it in more depth. As adjudicators often say (but with justification) they’re all winners really  – well done, everyone!”

So well done to the Pillaton and St Mellion Handbell Ringers and the usual £25 Amazon voucher will be winging its way to you. Yet another victory for the South West!