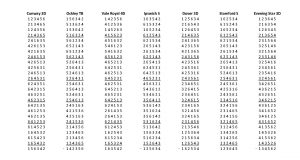 We have a few ‘Situations Vacant’ coming up which will give more people the opportunity to help with the Council’s work. Some of these will be announced after the forthcoming AGM but for now we are looking at establishing an ‘Events Management’ team, which can take care of organising ringing events. This is actually going to be a joint appointment with ART, as the two organisations have some similar events and would benefit from co-ordination. We are looking for people to be in a small team that will develop this expertise and work with local organisers on such events. So if organising things is your bag, please let us know.

The Dove database is one very tangible area of progress at the moment. The transfer to a new software platform has hugely increased the potential power of Dove and the next stage is transferring in all bell-level data. Dickon Love, on introducing the changes, was keen to recognise the contribution of the whole team – Richard Smith (technical development and bug fixing), Tim Jackson (checking transferred data and general counselling), John Baldwin (keeping the old system going and helping with transfer), Tim Pett and Doug Davis (testing).

We are working on a website that will enable ringers to ask questions about compositions, methods and conducting that they don’t understand and don’t know who to ask. The questions will be answered by a small group who are good at answering such questions in a clear unpatronizing way. Alex Byrne of Worcester is leading on it, and is starting off with a list of questions that Barbara Le Gallez sent me which includes such things as “Why does a composition come round / be true for some methods and not others (that are similar)?” and “48 Original Major: 5 5678s (2f,3b), 5 crus (2f,3b), 20 4-bell runs (8f,12b) – What mean these strange runes? Are they “old-fashioned” or “innovative”?” So if you have been spending lockdown pondering such things, help will soon be at hand!

Jack Pease completed the latest Facebook competition, which this time compared the ‘Finest Rings between 30 and 40 cwt’, with the word ‘finest’ being deliberately open to interpretation. Over 4500 votes cast! In a very tight contest, the crown was taken by Evesham, with Lichfield Cathedral close behind.

The Covid guidance pages on the Council website have been reorganised so that we can include a history of updates rather than just have the latest news at the top. It should work better on phones as well. We have submitted draft amended guidance to the CofE to try and reduce the separation to 1m plus mitigations, in line with guidance in other areas. And we are taking on board many comments received directly about how we can move further forward.

I actually did some method revision for the first time since March this Sunday. We rang a touch of 13 Spliced at St Martin’s Birmingham, where the first letter of each lead in order spelled out ‘COVID SELECTED’ (comp John Warboys). Conway, Ockley, Vale Royal, Ipswich, Dover… Having 16 bells enables such socially distanced performances. The conductor found  that calling spliced is slightly more difficult through a face covering especially when a change of method is interrupted by a mouthful of cotton.

A run through of the Central Council AGM on Zoom last weekend ironed out a few creases. The AGM is going to be streamed via YouTube for those who want to follow proceedings, although with the online format it is relatively light on business. The 2021 meeting will be in Nottingham as this one was supposed to have been.

On the agenda will be the 2021 Forward Plan, to which I am sure you are looking forward. While it could just be to actually do some ringing again and rediscover what it’s like to have a blister, it is going to tackle a few things that were proposals from the CRAG review which have not made it past first base. The big one is making progress on establishing some form of direct membership to a central ringing organisation. We spend many an idle hour looking at the structures of organisations like CAMRA (national membership, regional directors, local branches), the Croquet Association (individual, club and corporate memberships), the National Trust, RSCM, etc – organisations that manage to combine national membership with local activity. There will be a number of channels for consultation before Christmas which will hopefully cover anyone who can contribute to the debate.

One of the Brumdingers surprised me more than I think I have ever been surprised in a ringing context before. This is an 11 year old who has only been ringing a year and has not rung plain hunt on tower bells. But she has learned to ring handbells in lockdown and when on Abel the other day I asked her if she was ready to show me Grandsire Doubles on 3-4, which was the homework I had set, she said “can I ring Stedman Cinques?” Never one to stifle ambition, I suggested she at least reduced the peal speed to 3.30 to give her a fighting chance, after which she rang 11-12 to a bob course of Stedman Cinques very nicely (striking scores of 8.4 and 9.5). My flabber has never been so ghasted.

My daughter Charlie, knowing something of the ups and downs of this role at the moment, sometimes says “so Dad, has the list of people you might punch when you next see them gone up today?” So being positive, I have now started a new list! People for whom I will buy a pint, cup of tea, or piece of cake when I see them. Added to the list this week are the ringers of Skipton and Helmsley (they know why) and Andrew Howard, for his kind words in last week’s Ringing World. The CC has a new Treasurer warming up and I look forward to explaining the ‘President’s beer, tea and cake fund’. I am sure he will understand…