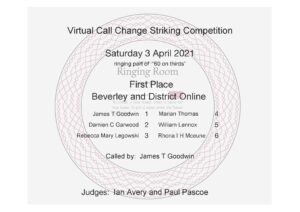 About 15 years ago, the roof of Grade I listed Calke Abbey was re-configured and connected to new, bigger, drainpipes because it was no longer coping with increased levels of storm rainfall. It was the first time listed building consent was granted to a Grade I listed building for alterations brought about as a result of climate change. English Heritage (as it was then) revised its definition of ‘conservation’ at the same time to be about managing change rather than conserving things as they are.

This story is relevant because towers are starting to think about adapting to the need for increased ventilation. A couple of years ago I asked for the windows in an airless tower I ring at, Perry Barr, to be changed to be openable, but the request was declined by the church architect. I wonder now whether the answer might be different. The importance of ventilation is becoming more prominent in government guidance and I expect many towers will need to be adapted. Some test cases would be interesting to establish principles.

Last Saturday I attended the first meeting of the new PR Workgroup, which has been assembled by CC PR Officer Vicki Chapman. It was an energising meeting of people all interested in ringing PR – definitely a ‘doing’ group. The Comms & Marketing Workgroup has been wound down. That is not to say that marketing is off the agenda by any means. In fact we are working on two funding bids for large scale marketing initiatives, one with the Big Ideas Company and one with the National Heritage Lottery Fund, the latter in partnership with ART and the Handbell Ringers of Great Britain.

Keeping the PR theme, Jane McCutchan from the Truro DG demonstrated their brilliant PR initiative enabling all bells in Cornwall to be heard on Easter Sunday. Go to the Truro DG website, start typing the name of a tower into the search box, e.g. Gwennap, and you will get a link to the sound of the bells. They have recorded every tower and these links have been distributed across Cornwall’s media. Gwennap is incidentally the scene of the worst sermon I have ever heard, the vicar managing to spend 30 minutes rambling incoherently on the text “When you trim the lamps, burn incense on the altar.”

The PR Workgroup has introduced new faces to Council work. I think a particular success of current Central Council activity is how many people we have involved who would never have considered it before, having moved  away from only drawing on the resources of CC Reps. One recruit I spoke to last week introduced himself somewhat apologetically as “only a village Bob Minor ringer really” – but that is exactly what we need. What makes people apologise for lack of experience? Given “only a village Bob Minor ringer” is representative of maybe 75% of ringers (and aspirational for 25%) it is a valuable perspective.

Handbell ringing took a surge with ringers in England in particular taking advantage of Covid restriction relaxation allowing groups to meet outdoors. Lockdown has created a new generation of handbell ringers, with some great success stories like the peal of 147 Treble Dodging Minor with the footnote “first touch of spliced on real handbells 1-2 and as conductor”. Handbell ringing has definitely been my own personal lockdown progress – having not really progressed in ringing for as long as I can remember I have enjoyed rediscovering being rubbish.

Young ringers who missed out on subsidised eBells via ART can take advantage of some more funding made available from the generous donations of the ART Awards of the Handbell Stadium and eBells winners to the fund.)

12 April brings back two mutually exclusive activities, in England at least. Young ringers’ groups can restart under the ‘supervised children’s activities in out-of-school settings’ guidance (see cccbr.org.uk/coronavirus for details), and adults can go to the pub and talk about ringing! I will be celebrating both by going to the gym.

Four bands of young ringers joined 12 others in the first (and probably last) Ringing Room call change competition, discovering that call change ringing on RR is really difficult, and doing so with closed handstroke leads is more difficult still. “May the team with the best internet connections win!” The competition was graced with expert judges in Paul Pascoe and Ian Avery, who helped design the format, and who awarded victory to the Beverley & District Online band. All teams rang the same test piece, being the first half of 60 on 3rds (slightly less if you started late because one of your band couldn’t find their laptop charger). The prizes were a choice of books from the Central Council shop for members of the four winning bands. Special shout out to one of the stewards, George Hart, for choosing my own “Judging Striking Competitions” as his reward for a hard afternoon’s work (bargain at £3.50).

Ironically that is a book that needs another chapter writing on judging Devon-style call change competitions. If I had an extra day in the week I’d write it (with due research). The Ancient Etruscans had eight day weeks – quite clever really as that must have enabled them to get more done.

Ringing on Easter Day proved once again quite how divisive guidance for opening up ringing can become. One thing that is agreed though is that the sooner we get away from rules and guidance that are open to so much ambiguity and room for interpretation the better. Let’s hope we don’t start to have to deal with Covid passports for ringing.

There are over 100 ‘Recovery Champions’ now pulling together and thinking about how to help get ringing back to strength in their local area. Some Recovery champions are taking a very local view, maybe focused on a cluster of towers, while others are coordinating association-wide approaches. One association has allocated a budget of £10,000 to ringing recovery – if you have a rainy day fund, it doesn’t rain much harder than this!