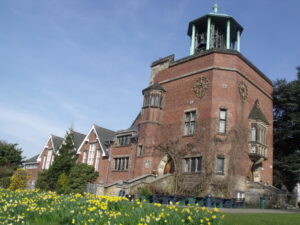 “Just checking it’s Blog week?” Ah yes. Monday evening 9pm and the Editor reminds me that I’ve forgotten. Fortunately, I have the bones of some material and a couple of hours of daylight left. It hasn’t been a great evening really. Got seriously biffed at my boxing class by carelessly being paired with Bruno again (ringing peals at Birmingham Cathedral on Monday evenings will be far less painful, even ringing the 8), but it helped get over the much-leaked news that England’s lockdown is extending another four weeks to 19 July. Four more weeks of only being able to ring on six and having to wear facemasks in church is not the news ringers were hoping for. Our inconvenience may be as nothing compared with nightclub or theatre owners, but it will come as a bitter disappointment to most of us.

I doubt ringing guidance is going to change but it will be confirmed on Friday. The Church of England’s guidance is very unlikely to – they are a risk-averse organisation particularly on issues concerning looking after people. The one page summary guidance first published by the Council a couple of weeks ago made it into the publication ‘Law and Religion’, next to an analysis of whether Boris Johnson has caused a constitutional crisis by becoming a Roman Catholic and hence being prohibited from advising the Monarch on ecclesiastical appointments (section 18 of the Roman Catholic Relief Act 1829). I bet that cast a shadow over his trip to Cornwall last weekend.  I wonder if he heard the bells at Carbis Bay when he was out on the beach? I hope some of the seven world leaders and 400 Secret Service agents did.

Many towers are managing to have practice nights again, albeit shorter and less sociable ones. And reports are coming in of practices including people ringing things which they have not rung before other than in Ringing Room. Hopefully it won’t be long before those towers who have actually managed to recruit new ringers (yes there are quite a few) will be able to teach them to handle.

Quarter peal numbers are climbing – about 25% of pre-pandemic levels, and some people are ringing 720s, either because it is guaranteed to be less than 45 minutes, or because like me they have come to the conclusion that adding a block of changes that is less than an extent onto an extent to make it quarter of a length that only really means anything for triples, is actually quite odd. 720 is a good length for a performance.

Quarter peal and peal donations are a significant source of income to The Ringing World so the pandemic has had a major impact on the publication’s finances. My prediction is that quarter peal and peal numbers will not recover to pre pandemic levels based on existing ringers, most of whom will be less prolific, and peal numbers never will. We have probably past peak peals. Many quarter peal bands are sending in the suggested donation of 75p per ringer which helps offset the reduced numbers. Only a third of peals being sent up to BellBoard have donations attached to them so are published by BellBoard for free. Maybe think about whether BellBoard is worth a donation after your peal success – it’s a great resource and does actually cost money to maintain and develop.

I have had the pleasure of running a couple of Cast of 1000 practices recently and although there are now only two every Saturday they continue to be a great success. Over 200 people have taken part in 80 sessions – 120 hours of focused surprise major ringing, learning and practicing methods from the Core Seven and beyond. We are now looking to roll out this initiative onto tower bells starting in September, ringing conditions allowing. I am really looking forward to ringing with some people in real life who I have only rung with in these practices and seeing achievements translate onto tower bells. All it needs now is an accompanying book! Working on it…

The PR Workgroup is trialling Plush Forums (https://plushforums.com/) as a potential system of discussion networks for ringers. We have had requests for association treasurers to have a group to discuss matters of common interest, and association Safeguarding Officers, all of whom face the same issues and may benefit from a support network. Facebook of course serves a useful purpose for some things, but not everything, and it definitely has its drawbacks.

How many carillons are there in the British Isles? I know of a few (two in Birmingham for starters) and would probably have guessed about 10. We are not the carillon capital of the world. The answer is 15 (despite none in Wales), as Dove’s Guide has expanded to include them all thanks to the efforts of Scott Orr and the British Carillon Society. Bournville Carillon was mentioned in a meeting I was in this afternoon – it was a gift from George Cadbury to his eponymous chocolate factory workers after hearing the carillon at Bruges. He bought the initial 22 bells from Taylors. We are struggling to extract a disused building out of a George Cadbury Trust as a home for the Birmingham University of Bell Ringing. This Cadbury bells link is a card to be played.

Last Friday the Churches Conservation Trust had an open day at the Old Black Lion and St Peter’s Northampton, presenting their development plans to the public. It was an opportunity to meet up with the Peterborough DG team and have a look inside the barn that could be our ringing centre. It’s certainly a decent size, and almost habitable if you’re a non-discerning pigeon. We’re thinking about a ring of eight training bells if we can fit them in the roof space. We’ll be looking for suggestions of what else to put in there to make it a real destination for ringers.