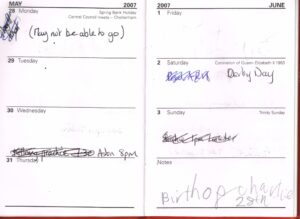 May 28 Monday – Central Council meets – Cheltenham.  (May not be able to go).  I found this entry looking through old diaries to see if I had ever been less busy on a late May Bank Holiday weekend. That was 2007, and the event risking my attendance at a CC meeting was the arrival of Charlie Linford, or ‘Herbie’ as he or she was known at the time. It was indeed a big day.

Interestingly given we are currently looking at the size of the Council and the relationship between numbers of members, numbers of Reps and affiliation fees, the 2007 meeting was the last time a proposal was made to make CC affiliation fees proportional to the numbers of members. Phil Gay proposed and John Harrison seconded, noting that the fees paid per member ranged from 40p to 6p (it now ranges from about 75p to 10p). Narrowly defeated. The meeting started at 10am and finished at 5.50pm. But I digress. You can always read the minutes for yourselves!

The last thing I rubbed out of my diary was ‘Wimborne Minster’ – a late May Bank Holiday peal engagement that had fallen by the wayside – in fact the only peal attempt I had rather optimistically pencilled into my 2021 diary. At a meeting of the Council Executive just before Christmas we had a sweepstake on when we thought we would next ring a quarter peal on tower bells. Bets ranged from this month (looks on the money) to September 2022 (!), although that may have been diary malfunction rather than extreme pessimism from Clyde. For peal ringers, May Bank Holiday weekends have always been opportunities to go places that cannot be pealed very often. ‘Big’ rings of 12 are often Bank Holiday engagements, and a flick back through my diaries for a few years reminded me of some big days out, and long journeys home. And one big day in thanks to Herbie.

I think the most difficult aspect of guidance at the moment (for those in England at least) is overcoming the seemingly anomalous situation where wearing a facemask in a Place of Worship is still required by law, whereas meeting six friends or family indoors, or sitting at a table in the pub can be done ‘au naturelle’. A facemask is just about tolerable for a quarter peal I suppose, not that I have rung one yet. But you’d have to be really keen to ring a peal in one. If you’re not clear what the current ringing Covid guidance is (and care), we have now published a one-page summary of it all.

Striking competitions look to have fallen by the wayside again this year as well. The Devon Association is having to endure another year without the striking competitions that are such a focus of call change ringing, although a ‘Festival of Ringing’ is mooted for the usual date of the Eight Bell Final, restrictions permitting. At least one exception though is the Ringing World National Youth Contest, which plans to go ahead on 11th September in Worcester. This promises to be a great young ringers festival – see this wonderful welcome from the very pro-ringing Bishop of Worcester.

Are there any WordPress gurus out there who have not yet made it to the heights of association webmaster yet but would like to get involved in helping ringing websites? We need you! There is so much to be done on the CC website and to help get new initiatives launched that we really need some more willing volunteers to work behind the scenes. If we had a little team we could share the load and not risk burning anyone out. It might not be WordPress specifically – any experience of a website CMS will probably do.

We are also looking for one or two association safeguarding officers to help with a piece of work which is to define better the process for when affiliated societies or the Central Council are in receipt of accusations of bullying and/or safeguarding concerns. We have commissioned the Social Care Institute for Excellence to undertake this work. SCIE are viewed by the CofE as the premier authority on the subject. We have discussed recent cases with SCIE and they look well placed to help us deal with all this, which takes up an inordinate amount of volunteer time, causing more than one to have had enough. The requirement would be to attend a half day workshop with SCIE and then help turn the concept into a plan. (OK all those who spotted my Pretty Woman quote last time, where does “That’s not a plan. It’s barely a concept!” come from?)

We are supporting Pageantmaster Bruno Peek’s ‘NHS, Social Care & Frontline Workers’ Day’ – ringing at 8pm on July 5th, the 73rd anniversary of the founding of the NHS. When this was first conceived, ringing a single bell was all we hoped for, and the programme, which has quite high-level support and coverage from the Daily Express, says “we will hear the sound of our church and cathedral bells ringing 73 times – one ring for every year of our beloved NHS.” More bells are of course permitted and no one will dispute the count.

The PR Workgroup has launched its Photo Competition, the aim of which is to create a photo library of excellent ringing pictures that can be used by PRs and journalists. The first category is “Ringing throughout the Seasons” and is already attracting photos of churches with snow, blossom, autumn sunshine, and May Bank Holiday expectation. Closing date for this round is 4th July.

Quite a few PR officers are having success with ‘getting back to ringing’ stories. It seems the public really is missing us. Durham Cathedral managed to get their return to ringing onto the BBC News website and also the English Cathedrals website, and with a very good image of Durham’s bells which would be worthy of a photography competition …