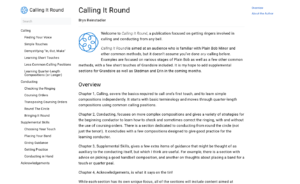 We have launched a major new publication! “Calling It Round” has been written by Bryn Marie Reinstadler and is focused on the first steps in calling, and getting more ringers confident in both putting in calls and conducting from any bell. Although it was not in the brief, Bryn elected to deliver her work online, enabling the content to be much more dynamic, including online quizzes at the ends of chapters, and being able to link to other helpful content such as Complib. It can be found at callingitround.cccbr.org.uk.  Future chapters of Calling It Round are planned and so the book will develop.

When asking Bryn to write this, I was particularly keen to focus on not needing to call and conduct from the tenor. The focus on learning to call from the tenor is just one of the reasons why men do most of the conducting, and so to support the Women in Ringing initiative we felt more needed to be done to show how those wanting to ring anywhere in the circle can learn to conduct. It’s not just women who don’t always fancy ringing the tenor – when I took my first conducting steps I was a slight 14 year old and wouldn’t have been able to ring the tenor at Cannock and call it even if I’d wanted to. So we think getting away from the tenor focus is vital in expanding the pool of confident callers and conductors.

From the Council’s more traditional stable of publications, I was very pleased to receive half a dozen copies of the New Ringers Book which I mentioned last time (Brumdinger presents). I still have my copy of Diagrams that was presented to me during the morning service by Cannock’s very ringer-friendly Rector (my Dad). Graduating from the choirstalls to the tower was aspirational, and having a book none of the other choirboys understood helped with the general mystique. Much more cool than etching your name on your hymn book in sulphuric acid…

The G&B is continuing to use Zoom for what looks to be an excellent programme of seminars for their Summer School later in August. They have 26 seminars running over the course of the week, with subjects as diverse as understanding ringing terminology to the history of women in ringing, all orchestrated by Steve Coleman. That’s a bit of a tease really, because there is no general invitation (they’d be swamped), so it’s more an indication of what can be done, and how Zoom can retain its place as a tool for associations teaching and engagement.

Online ringing platforms are still active and seem likely to be of permanent interest to many. Although Ringing Room is down 40% from its March 2021 peak, that is still a lot of activity and it has levelled off, indicating that the platform has found its place. 1320 distinct ringers have recorded an online performance via Bellboard.

Recovery Champions are meeting this week – too late to be reported here. But one thing we are going to (or did) discuss is how to share more examples of real life recovery. A Guildford Guild newsletter was a great example of how to do it – short stories from towers across the Guild – the strong, the weak and the average. What can happen is that the towers that are very successful broadcast how brilliant they are and how many people they have had at the practice, which does nothing to help or encourage other towers that might be struggling. Guildford’s newsletter is nicely balanced – stories from towers that are feeling their way back.

In the last couple of weeks we have come across a number of lapsed ringers wanting to return to ringing. ART has had unsolicited enquiries including from people who have moved and now have more time, looking to return to something they enjoyed in the past. This does look to present a very great opportunity. A 7.30 practice is tough if you have been hard at work all day and travelled home – I suspect the majority of practices I attended between the ages of 25 and 45 were after missing a meal. The pandemic has changed many people’s working patterns, and for someone who has worked from home all day, going out in the evening to ring (maybe even eating first) and see some people is now very attractive. There are also people who are reappraising their lives, moving away from hustle and bustle, and discovering they have more time. This is low hanging fruit.

I bet there are four or five times as many lapsed ringers than active ones. If I flatter myself into thinking there are 1000 readers of this blog, if we all manage to activate just one lapsed ringer, that would already be a good start in plugging the gap of those we know we’ve lost. They might also be in the missing working-age bracket. I am going to post in the Everything Moseley Facebook group and see if there is anyone in my local area who has lapsed. Let’s go picking fruit!

I am still on a voyage of discovery in terms of finding out things that Council workgroups have either done in the past or recently. My latest discovery came when I was updating the Executive on progress with the Ringing Centre in Northampton, where the CCT were asking for details of what would be done to the bells at St Peter’s. As I looked to explain different types of sound control to the CCT’s project managers I found a very comprehensive presentation on sound control by Mike Banks on the Council website.

Following a very good first round, the second round of the photo competition has a deadline of 15 August. This time the subject is ‘Bells and Installations’ and there are already lots of great pictures uploaded (I like the ones with bells in motion). All instructions can be found here.

P.S. I forgot to mention that Calling It Round is free.