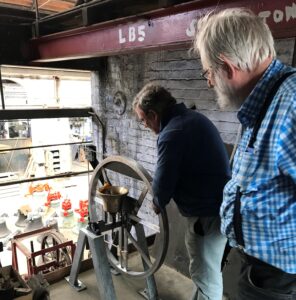 I must confess to having lied in my Outlook vacation autoresponder by saying I am trekking in the Himalayas with just a satellite phone to give me internet access. In fact, this holiday cottage in Northumberland has first-class internet access meaning work doesn’t stop. I usually have fun making up holidays I haven’t been on when sitting in the barber’s chair. They don’t really care, so why not just make it interesting?

One project that has been ticking along quietly in the background is the new mobile belfry. The idea here is to have something that is easy to transport, quick to set up (30 mins), provides a realistic ringing experience, and looks the part. It will be part of a major push to get bells in front of more people – in schools, at music festivals, shopping centres, business parks. The Loughborough Bellfoundry Trust has very kindly agreed to give the bells themselves, and Charlie and I went up to Loughborough with Phil Gay (one of the architects of the Lichfield Diocesan Mobile Belfry) and Roger Booth (owner of the Charmborough ring) to test out one of the new bells. And it was absolutely superb! A really realistic bellringing experience from a very small bell. As there’s nothing like a deadline to drive action, I’ll have a micro website on the project available in two weeks’ time.

What is the best short video that explains bellringing? It’s not short at 48 minutes long, but I had never seen the film ‘The Craft of Bellringing’ until this week: https://vimeo.com/georgeperrin. Not great in the diversity stakes but it was made seven years ago. Just before lockdown, the Churches Conservation Trust had produced a publicity video on ringing of a similar professional production quality. It has not been released yet but hopefully they will relaunch their recruitment campaign in the new year. George Perrin has also now made his video tutorials for bellringers available via the online learning platform Udemy. It won’t suit those who think ringing training should be free, but even if you only look at the sample videos on the site (https://www.udemy.com/course/bellringing/) you’ll see some useful resources.

One of the first things I did on holiday was actually read the whole of the Church of England Mission in Revision, a review of the Mission and Pastoral Measure 2011, which is the paper over which the ‘Save the Parish’ campaign has become very concerned (see the letter from Emma Thompson in the 27 August issue of The Ringing World). It starts off with a review of the legal complexities of changing anything to do with the Church and seems to be a classic case of “if you want to design a Church organisation for the future, with a structure and buildings fit for purpose, you wouldn’t start from here.” Which is not unlike ringing organisation to be honest. One thing for instance that I had never really appreciated, is the relationship between the faculty process and listed building consent, i.e. that it is the “Ecclesiastical Exemption” that gives churches exemption from listed building consent. Whereas those involved with churches might bemoan the faculty process, requiring permission for something as simple as putting up a pealboard, it could be far worse if you had to get listed building consent from the local planning authority and potentially Historic England instead.

Most of my holiday postbag has had GS2222 in the title, GS2222 being the catchy short title of the aforementioned 48 page Mission in Revision consultation paper. Church closures is one of ringers’ greatest fears, and if you want an ice-breaker for having a chat with your incumbent, how about asking them what they think about GS2222 and how they think you should respond to the consultation?

Lots of things have accelerated as a result of the pandemic – working from home, death of the high street, church closures – but what about the demise of cash and its effect on ringing? The only things I now use cash for are tips, paying builders, and any sort of ringing donations. Collecting donations is going to become a bit of a problem, especially with most payment systems needing some sort of internet connection and some church towers being far from them. The CC has had a request for advice, and I wonder whether any towers have gone cashless yet in terms of donations, whether for visitors, wedding money, quarter or peal fees? Feedback appreciated.

Last time I talked about lapsed ringers being low hanging fruit in the recruitment process. Well, I think I may have already picked an apple! On Sunday I posted on my village Facebook group (yes, the residents of Moseley, Birmingham, do rather pretentiously call this suburb “the village”) that there might be lapsed bellringers out there with time on their hands to fit in some ringing and I got my first positive reply 😊. And last Thursday we found ourselves sitting in a pub with two lapsed ringers, one of whom perfectly fits the profile of someone who now works from home and has a couple more hours in the day. Would they be persuaded to do some ringing again? Probably if the profile of commitment changed. Cast of 1000 recruits at least.

Anticipation is building for the first major ringing event since we stopped having major ringing events. The Central Council meeting in early September might still be virtual but the Ringing World National Youth Contest is a most welcome physical gathering, with 20 or so teams planning to be in Worcester for a day of ringing. Youth teams have suffered as much as any bands during shutdown – they are transitory anyway with kids growing up, but it is good to see so many teams represented. And if anyone thinks the tower at the Cathedral moves at bit, recent measuring has shown that it only moves a tenth as much as Leamington RC, whose movement is equivalent to an earthquake of between 4 and 5 on the Richter scale. No wonder Charlie needed an ice cream afterwards!