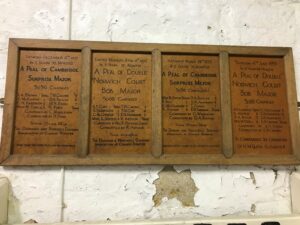 I ought to start with news of the Council’s Annual Meeting, being perhaps the most important thing I had to do last week, but I am going to leave it to the end so as to build a sense of anticipation. Instead, I will start with a report on my trip to Whalley.

Whalley is place name I will have said over a thousand times (it is a method in Smith’s and Chandler’s 23 Spliced compositions) but I have never been there. To be honest I wouldn’t have pinned it on the map that precisely although I knew which side of the Pennines it is on. So, when I found myself driving home from a holiday in Northumberland, having dropped my family at Knaresbrough station for onward passage to Headingly, I took the opportunity to divert and see BellSim, in the garage behind Adrian West’s house in Whalley.

BellSim is Adrian’s prototype simulator which just uses servo motors and industrial automation control to move the rope and simulate the forces of the bell (see articles on it in the Ringing World on pages 732 and 767). I had long ago dreamed of a simulator that didn’t use an actual wheel but just had a servo motor driven drum. It would be easier to fit above the ceiling for a start. Adrian has done it, and it exceeded my high expectations.

While the Ringing World article was detailed and factual in terms of how BellSim worked, I can add a bit more of a new user experience. Despite there being no bell or wheel involved (those parts are simulated), it handles exactly like a real bell of any weight – I rang it set at weights from 5cwt to 20cwt. Slow motion mode, ringing up and down, analysing pull force and efficiency percentages, integration with Abel – it was all there. I’ll write a longer report otherwise I’ll run out of words. Loved it.

Our presence in Northumberland did not escape the attention of the Assistant Editor of the Ringing World Chris Teasdale, who invited us to Morpeth practice. I don’t think there is any greater pleasure in ringing than going to a practice and enabling different things to be done (adding three ringers will help most practices). There’s plenty of history in Morpeth Clock Tower. The peal boards read like a chronicle of the great and good of ringing in the North East over the last 70 years.

A special shout out to Mark Elvers, Web Editor, who did the CC Reforms consultation website overnight when I sent him a huge amount of content at 10pm. When I logged on in the morning there was an email saying “something like this”? Actually when I looked back on the emails, the website had been created in 18 minutes. I need to make my challenges more difficult. Anyway, it’s up there and IMHO makes interesting reading. It’s a huge collective body of thought on how we might make ringing organisation better.

‘Save the Parish’ now has a dedicated webpage (13 minutes) which can be found off the Bells and Ringing tab on the CC website. There is some introductory spiel to put the campaign into ringing context, then all the various links to papers, informed comment, and media coverage. The main message to draw from this is that taking a position on either side of this campaign, or on the consultation paper it is campaigning against, is difficult for ringers, even if you have read it all (and impossible if you haven’t). Our advice remains to use it as an open door to speak to your incumbent or PCC, see if they have a view on it, and generally start the process of having a closer relationship if you don’t already.

The G&B Summer School was reported to be a great success, demonstrating continued demand for online distributed ringing training. 26 seminars, 22 different presenters, and 850 attendances, with broader reach now than just the G&B. Some ringers joined from America and Australia, including one Australian ringer who joined at 4am!

And so, to the moment you have been waiting for. I know some will have even jumped here and saved the rest for later. A brief snapshot of the Annual Meeting, a day which for me and a few others requires a huge amount of preparation, rewarded by it being virtually hitch free. I managed to fit in parkrun beforehand, had Charlie on hand to deliver tea at what seemed like half hour intervals, and had a decent three hours of positive stuff.

About half the meeting was taken up with Workgroup presentations and discussion, brought right up to date, and my presentation of the Executive’s ‘Forward Plan’ for 2022 –projects we are working on in addition to Workgroups’ work. These included a major coordinated recruitment campaign, a Heritage Lottery Fund bid for taking bells into schools, the new Mobile Belfry, starting the Cast of 1000 on tower bells (it went well on Ringing Room), launch of the Ringing Forums, a National call change competition along the lines of those run in Devon and the South West, and the new ringing centre at Northampton which is being developed with the Churches Conservation Trust.

Despite there now being about 100 members of the various Workgroups and support groups, most of the Workgroup reports finished with the leaders asking for more help, increasing yet further the amount of work they are doing and making those who say the Central Council is irrelevant to them and doesn’t do anything look even more ignorant.

Finally I need to put the record straight on the quite scurrilous suggestions that what I was drinking at the start of the meeting was beer, just because it was in a glass and looked a bit brown. Firstly the glass was a ‘Kiss the Hippo’ coffee glass, and the content was a Rooibos tea with Berry and Ashwaganda from Mission Teas – tagline “Fuel Your Extraordinary”. You couldn’t make it up.