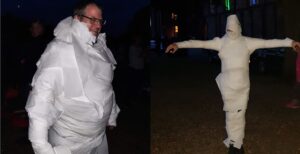 In a relatively quiet couple of weeks after the Council meeting I have been able to think about our Strategic Priorities, which formed the backdrop for my report on the last year’s activities and the Executive’s plan for the next 12 months. This is a mid-term review – two years into a four-year stint as President, 18 months of which have been rather disrupted! I am quite pleased with what we have managed to do despite the lack of ringing (or perhaps because of it to some extent), but there are a lot of things which I really want to get happening in the coming 12 months. As Yoda might have said “there is no talk only do.”

The Youth Contest has been well reported and I was able to be there as a team leader and helper rather than with any heavier hats. Despite not having a name badge I did get recognised – one young ringer who said he was pleased to have understood the slightly cryptic numbering of my last blog asked for an autograph, and one of my own team, after I had been greeted by about the 100th different person, said excitedly “Simon, you’re a celebrity”!

The YCRA-led wind-down event in the evening showed why we need to leave it to the young ringers themselves to organise social events rather than try and guess what might go down well. Early in the planning Charlie had excitedly announced that they were going to have a giant parachute. I was sceptical as to the value of this as the centrepiece of an evening’s entertainment. But she was like “but it’ll be really cool”, and I was like “yes but what do you do with it”, and she was like “well you flap it in the air” and I was like “yeah whatever”. Well, they knew what to do with it – they all stand round in a circle flicking it up and down and then try and run under it without getting squashed. And who would have thought that wrapping your team leaders in toilet roll would be such a hit?

Returning to Worcester a week later for the College Youths Country Meeting saw a much calmer atmosphere in the Cathedral ringing chamber, and a demonstration of quite how much easier these mighty bells are if you just pull them hard enough, and keep hold of the tenor tailend. I hadn’t expected my two hour stint running ringing at the Cathedral the previous week to have included giving the tenor tailend back to its owner four times, with increasingly urgent suggestion that keeping hold of it was going to make both our lives easier.

With three trips to Worcester for the Youth Contest and ASCY Country Meeting, and two trips there for handbell peals in between, it was beginning to look like any excuse to drive past my favourite pair of Belisha beacons which are en route (Yardley Wood Road). They have particularly fine flashing lights all the way up the stalks. My family makes fun of my fascination with them but I think it’s good to have a wide range of interests. I like power stations too.

Talking of young ringers, Charlie noted on Friday that it was the first day she had not been ringing in two weeks. That’s a particular advantage for the progress of children of ringing parents, and it would be interesting to see the ringing vs non-ringing parent stats of RWNYC teams. I find with the Brumdingers that it is far more difficult to arrange things with non-ringing parents, and now have to deal with the added complication of knowing which parents have cars which are allowed to go into Birmingham’s new Clean Air Zone – yet another burden for the ringing organiser to bear.

Non-ringing parents don’t quite get the concept of putting dates in diaries a year in advance and them being sacrosanct. I have just transferred all the forward dates from the back of our diary into the family 2022 desk diary and that’s a lot to write in, including some things in the 2023 section (like “Last day as President of CC”). Quite a few things are postponements – I have now got dates for Devon Association call change finals, the Irish Association Ringing Festival, the Trinity Shield in New York, a couple of dozen peal attempts, UK22 (a non trivial piece of organisation for me), keeping as many Saturday mornings free as possible for the Birmingham School of Bell Ringing (BSoBR), which restarted last Saturday, and Saturday afternoons for various Cast of 1000 practices. We’re looking for a date for a national call change competition to build on last year’s virtual event and stimulate our Strategic Priority of raising the profile of call change ringing as a target in itself.

Although I was not needed as a tutor last Saturday it was good to see the BSoBR start again. This is one of the few examples of centralised teaching, which many in Recovery Champion meetings have thought about doing but with the challenges seeming to be high. It is just a question of starting small, as the BSoBR did in 2013 and now does again (five students). Key is to get over the concept of ‘ownership’ of learners and let learners be taught by the people who will teach them best in environments that are conducive to teaching and learning. Knock on positive effects are that the students build their own support networks and become your best advocates.

There is talk of shortages of presents and turkeys at Christmas which gives scope for anyone peddling ringing merch to get ahead of the game and plug any present/turkey void. I am well sorted because everyone in my family is going to get a signed copy of “The Core Seven and Beyond”, inspired by Project Pickled Egg, which is finally looking like it is going to be ready for Christmas stockings. No turkey jokes please.