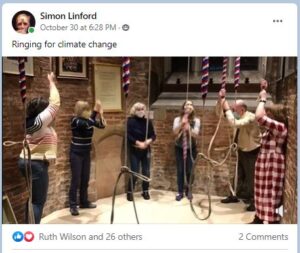 Maybe when you get older you start to like routine a bit more. My Saturday mornings have settled into a similar pattern. Start by getting some early things ticked off my to-do list, then parkrun at 9am, before heading off to the Birmingham School of Bell Ringing to water the grass roots. I quite like not needing to worry too much about what I am doing. The School is gaining momentum again following the long lay-off. When you get used to it, it just becomes the thing you do on a Saturday morning. There’s plenty of weekend left.

The last two Saturday mornings I have been teaching bell handling, and it gave me an interesting observation as we are all thinking about finding more teachers, and then teaching more new recruits. Two of those embarking on a 10-week course of learning to ring were not from a tower associated with the St Martin’s Guild, but from a neighbouring association. There are lots of advantages to centralised teaching but it needs people to get over the concept of ‘ownership’ of the learner. We are not too bothered where a learner comes from, and distance is a natural regulator anyway – we are unlikely to teach anyone from Cornwall. Get the teaching done in the best place by good teachers who enjoy doing it – it’s good for the learner and their local band.

Those Cornish learners can now go to school in Cornwall anyway! Last Saturday saw a ringing school start off at Wendron, aiming to teach ringers for a cluster of six towers in the Kerrier Deanery. Organisers Andy Smith and Hayley Young have started a dozen raw recruits from across the whole of the Lizard peninsula with an initial burst of six intensive Saturday sessions. More observations there – forming a cluster from scratch and aligning the cluster with a Deanery for better communication with the church and alignment with moving services. AJB will be pleased!

Still in Cornwall, congratulations to Robert Perry from Truro who has been elected to the General Synod of the Church of England. One of the goals of the Save the Parish campaign (see blogs passim) was to get more lay people to stand for the General Synod, so there is more of a voice for ‘ordinary’ people. STP wanted people to stand under an STP banner but actually just having wider representation is a good thing. The outcome of the GS2222 debate will have significant consequences for ringers so having Robert with his eyes and ears on the inside is great news.

The Council’s ‘Strategic Priorities’ paper has been brought up to date, sent to all CC Reps and associations, and published on the Council’s website here. This was originally written in the first few months of my Presidency and remains our working document for things we are trying to do. We can’t do all of them, but at least the things we do can have consistent purpose. I have always said it is a working document and cannot just sit on the shelf as a theoretical musing. There is no talk, only do.

Every now and then I come across things written by past Presidents, working parties, trends committees, etc, which say pretty much the same things as the current Executive says in our Strategic Priorities, which just serves to show how hard it is to make things happen! This was from 2004:

The major issue to emerge from the research is, as anticipated, that ringing is suffering from a failure to recruit and/or retain young people. Reasons why this is a problem in the longer term (though not in the immediate future) are given, and it is recommended that the Central Council initiate a ringing rejuvenation project to promote recruitment and effective training and retention of young ringers. The Public Relations, Education, and Ringing Centres committees should jointly address this.

Following thought-leader Mary Jones’ passionate appeal for ringing for climate change in last week’s Ringing World, BBC News followed up with prime time Radio 4 pieces on Saturday. I heard it at 7.04 and 8.04 which is pretty good for a bells news story. Our own PR effort had got the story out and covered by a number of BBC local radio stations as well, with Phil Orme curating some decent bits of ringing for them. As others probably did, I posted video of our local ringing on the Everything Moseley Facebook group, making a change from people complaining about fireworks and the proliferation of hairdressers – in addition to the usual twerps asking if we can ring tunes, the local MP liked it.

This was one of the more useless emails I got this week in my CC inbox:

“While browsing through your pages, we found multiple opportunity areas in the user journey where your customers are dropping off before they make a transaction.”

I almost followed this one up just for fun and to waste his time, but I value my own more. He made the mistake of calling me Christopher for a start, and then committed the cardinal sin of using the hateful word ‘journey’. Anyway, I have already got a small team making sure that the CC website’s customers ‘don’t drop off before they make a transaction’, because we have been doing a lot of work behind the scenes editing and improving search terms in pdfs and other documents so that good results are found by searches. It’s quite tedious work, but the team of Eileen and Bruce Butler, Allen Nunley and Ian Mozley have been beavering away for weeks. 40% of 4000 documents indexed!

The Kilby Memorial peal for 2021 is being attempted by the Yorkshire Association – it makes me very happy when people read my blog! Thanks to Barrie Dove for stepping up to the plate and organising that one. Plenty more notice for bands who want to grab the 2022 opportunity. How many firsts is it possible to get in a peal of Stedman Caters?