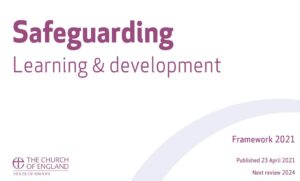 Members of my local band have got used to me saying “sorry I’m not drinking this week, I’m 200 words short.” Finishing my blog on a Sunday would be more sociable, and preferred by the Editor, but I live life on the edge.

I am going to start with quite a serious point. In April, the Church of England adopted its ‘Safeguarding, Learning and Development Framework’ which replaces, and generally beefs up, the levels of safeguarding awareness and training needed by all those involved in the life of the Church, including bellringers. There is concern in many quarters that tower captains will have to do the ‘Leadership’ level of training, which is a cut above what most ringers have ever done, with huge potential for towels being thrown in. Dave Bassford, one of the Council’s Safeguarding Officers, has been working closely with the C of E’s National Safeguarding Training and Development Manager since April to explain the role of tower captains, and it looks as though in most cases this level of training will not be a firm requirement for every tower.

That’s the good news. The less good news is that each Diocese will make its own decision on whether tower captains are exempted from Leadership training, on a parish by parish basis, and each territorial association will need to liaise with its Diocesan Safeguarding Advisor to determine whether some, most, or even all tower captains in the Diocese will be able do just the lower Basic Awareness and possibly Foundation level training but NOT the Leadership course. Furthermore, from January next year doing the Basic Awareness safeguarding training is going to be compulsory for ringers (its an online course) and this wider awareness of safeguarding will enable tower captains not to have to do Leadership training.

It has long been recommended that ringers should all do the Basic Awareness course (CO in old money) and we have strongly supported this position and encouraged all ringers to undertake this valuable training. We sincerely hope that all ringers will be happy to work with the Church on this.  There is much work still to be done but we hope to have more concrete advice out early in the new year.

This week saw a reunion of the Covid guidance team. While many ringers and towers have returned to high degrees of normality, we are also aware that some towers have not restarted ringing at all, some towers are not allowing visiting ringers while others are not welcoming the unvaccinated (including young ringers), and now the onset of winter is driving us to close windows. I am currently collating and absorbing feedback from the Recovery Champion network on what is generally happening and where more guidance might be needed.

One performance I noticed that might not get to the required temperature to be considered as ‘hot’ on BellBoard was the first quarter on the augmented eight at Strensham. The significance is that Strensham is looked after by the Churches Conservation Trust, and is arguably their church where ringing is the most successful aspect of the renewed life of the building. The CCT is looking to run its ringing recruitment campaign next year that was cancelled two years ago (which will include the best ringing promotion video I have ever seen), and towers with facilities as good as this will be key to that campaign’s success.

My delve into the contents of the CC website this week finds the Record Peal section https://cccbr.org.uk/resources/record-peals/ This is one of those areas of ringing which is of very limited appeal, but which may still fascinate (the list in the Diary fascinated me long before I rang a peal). Not many people have rung peals of 10,000 or more changes, and those who have tend to have rung quite a few. What motivates people to ring for so long? Some enjoy it, some crave fame and glory (!), there is great team spirit, mental and physical challenge, and typically hours of high quality ringing.

I was particularly interested to see the categorization of records between ‘Standard Methods’ and others. Who decided those particular methods were standard and how could that be updated I wonder?!

Will long length ringing continue into the younger generation? Not likely based on my survey, which had a statistically dubious sample size of one. Walking back from a quarter peal on Sunday evening Charlie said “I am quite happy spending 45 minutes of my life ringing but I can’t see why I would spend three hours doing it.” Parental guidance needed there.

The fledgling Young Change Ringers Association has announced the first of its three major events for next year – an outing to Birmingham in January. Though I say it myself as a local, Birmingham always puts on a very good show when it comes to outings, with great bells in walking distance and the draw of the 16. I have done my fair share of running ringing at St Martin’s for massed ranks of young ringers and it is always a joy to share the experience of ringing on more bells than anyone has seen before. If your young ringers have not yet come across the YCRA, which in addition to organising events for young ringers aims to act as a support and mentoring network, details can be found at https://ycra.org.uk/

Finally on the youth theme, Colin Newman gave an excellent talk a couple of weeks on running youth teams, and there was an interesting observation from Chris Hughes, who looks after the Kildwick Mini Ringers. He suggested that teaching young ringers is not about finding new long term ringers for your own tower. They will probably leave home. You are investing in ringing’s future. That is a very selfless investment in time. University cities like Birmingham are net beneficiaries of the teaching of young ringers. We get ‘work in progress’ and then benefit from developing them further for three years or so. Again, we recognise many will move on but we have also done our bit. It’s all part of the ringing ecosystem.