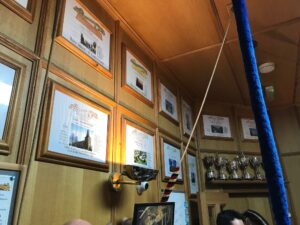 Devon wasn’t the warmest or driest place on our target list of post-Christmas holiday destinations, but it didn’t carry any quarantine risk which was an important consideration. It also presented the opportunity to seek out some Devon style call change ringing, thwarted as I have been so far from visiting any of the major competitions by pandemic cancellations. It was a stroke of luck therefore that one of the best bands in the region, Kingsteignton, were having an outing to Exeter, close to where we were staying, and on our first day of holiday. Not to be missed!

We were a little bit nervous, and I even wrote the same ‘note to self’ on my palm which I write before handbell peals, but Charlie, Eleanor and I adapted quickly enough not to stand out and had a very enjoyable day. For me it reinforced why we have in the Council’s Strategic Priorities to promote this style of ringing more widely and as a target for more bands. The band was clearly producing better ringing than ringers of the same experience would have been producing if they had been ringing methods, and the ringing up and down was excellent compared with the average one gets from method ringing bands, based on so much more practice and focus. On this one outing to four towers, we rang up and down on eight 20 times, without any instance of one bell not being in the right place.

To get another fix, we went again to Kingsteignton on New Year’s Eve, a ringing chamber emblazoned with trophies and adorned by silverware, as many towers in Devon are. This time I was given the opportunity to call a peal, from the treble as is customary. I had done a bit of homework and called this shorter version of what I had in my mind.

I chose to call something akin to what I would normally call at home but longer and in their style, and of course with the ringing up and ringing down as part of the performance. It went really well and I was busy being pleased with myself when the treble decided to strike again a few seconds after we had finished, to hoots of laughter, extinguishing my sense of triumph. A plan has formed in my mind to have a monthly call change practice at my home tower, including ringing up and down for every touch. I think it will be good and who knows, one day there might be a Moseley Invitational Shield (which will probably end up in Kingsteinton).

One of my holiday projects was to read the Christmas issue of The Ringing World. As a subscriber I don’t pay much attention to the cover price but noticed it was £2.90. It is a long time since I have bought a magazine from a newsagent and noted the cover price so I didn’t have much to compare this with. I saw that the copy of Modern Railways that kept me entertained for 20 minutes at the in-laws’ at Christmas (it contained a special HS2 supplement in which I have more than a passing interest) was a princely £4.55. Quick puzzler – if The Ringing World turned out to be 9.5 times better value per minute than Modern Railways, how long did I spend reading The Ringing World?

Peal ringing is picking up again for many bands and it will be interesting to see how 2022 compares with the last full year of pre pandemic peal ringing. My bet is 25% down. One of the Kingsteignton ringers who also rings peals described going out peal ringing and taking part in a call change competition as equivalents, in terms of both being the focus of an enjoyable and sociable day out, aiming to put in a quality performance, and giving something to reminisce about. Hopefully call change competition ringing will also recover.

When I am asked to call a peal for a special occasion, I often ask myself “What would my father in law call?” There are times and places to takes risks and push the envelope. Alex Riley didn’t read the memo with the 2021 Robert Kilby Memorial Peal, which sneaked in just before the deadline of the end of the year. This annual peal bequest for a peal of Stedman Caters needs to include a first in order to promote the method – the Yorkshire Associaition’s performance was a first for Alan Futers, with fellow Durham student Alex Riley composing and conducting a composition at the strictly non trivial end of the risk/reward scale. Offers open to any association wanting to ring the 2022 peal – all expenses are paid and there is a smidgen of kudos.

Final holiday job was preparing for my Leadership Safeguarding training later this month. First, I needed to get through the application form, which nearly failed because there was a box to tick “Are you a member of a Church of England congregation?” which I didn’t tick it because I am not really. After calling people to worship, in at least one place, my job is done. Computer said “no”. There was no option for not being a member of the congregation. This is just one tiny aspect of how this system doesn’t quite recognise bellringers.

Moving on, I got sent the four questions on which you need to ‘reflect’ before joining the course. I am not a great one for ‘reflecting’ on anything, but after some initial annoyance at phraseology the questions were fair enough, asking what safeguarding means to me, thinking about the setting in which I am a leader, what I think it means to the church, and any personal experiences. You are advised that a few quick one liners will not cut it, but once I got going I had no difficulty meeting the word count and submitted my homework. I haven’t read or reflected on the Psalm yet though but this did not seem to be a requirement in advance of the course.

Why the Golden Blog? Because I have now written 50!