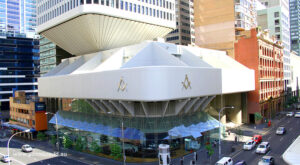 The highlight of these last two weeks was going to a ringing dinner for the first time for ages, and the first speech I have given as President standing up. Not my local St Martin’s Guild dinner, which was an unfortunate diary clash, but the Leicester Diocesan Guild’s 75th anniversary dinner at which I had been asked to speak. It was a convivial evening meeting old and new friends, legends of the Exercise, and up and coming youngsters.

Just after the war when the Midland Counties Association had grown so large as to be unserviceable (it had a central committee of 36!), smaller Diocesan associations including the Leicester DG were formed to get closer to their members. Their member were also keen to get closer to their clergy following the establishment of the Cathedrals of Derby and Leicester in 1927. “The words Midland Counties Association mean nothing to the clergy, but if an organisation was formed with the word Diocesan attached to it, the clergy would take much more notice of it.”

It was interesting to reflect on how ringing had gone into the Second World War suspension in a position of strength, and actually recovered relatively well when ringing resumed. We went into our more recent period of ringing suspension in a much weaker position, and so there has been much more talk about how we are going to do things differently in order to build back better. We had another meeting of Recovery Champions on Sunday evening and the particular topic under discussion was succession planning, and in particular how to give potential tower captains the confidence, skills and experience to take on the role. Lack of leaders is a widespread problem.

The case study of the Recovery Champions meeting was one of the most encouraging ringing stories I have heard in a long time (even more encouraging than I had to be to stop Charlie fainting 100 changes from the end of a quarter of Stedman Doubles an hour earlier). It would have been sufficiently encouraging to hear about how Trisha Hawkins, Tower Captain at Barnes, had managed to replace herself while staying a member of the band. However, get this. Her successor Wendy had been listening to Radio 4 one day in 2018 and heard about the Ringing Remembers campaign. Interested, she went on the website and enquired. Trisha made contact quickly, taught her using ART’s Learning the Ropes scheme, and four years later, two of which were locked down of course, Wendy was elected Tower Captain on the same day as ringing her first peal. There are just so many good aspects to that story!

Back down to earth, the ‘Save the Parish’ campaign came up in passing on our table at the dinner. A top table will usually have a decent crop of clergy with whom to discuss matters ecclesiastical, and I was able to share my grave digging experiences with the Canon Precentor of Leicester Cathedral, who had just found 100 graves underneath where they are hoping to build a new building! All of the consultation responses to GS2222 have been published now and the concerns of bellringers have been heard:

“Moving bells was seen as being preferable to leaving them in situ if they could no longer be rung, which was viewed as the “worst of all scenarios”.

Leicester’s young ringers came up in conversation quite a bit, having asked that their practices be doubled from monthly to bi-weekly. They are working out the logistics of getting to Exeter for the Youth Contest in July, potentially looking for travel buddies. Entries for the RWNYC open this Friday, and whilst leaders will have received instructions directly, other interested groups will find information here.

Also open is the Council’s new North West course, at least for expressions of interest in coming. You can sign up to be on the waiting list on the course website here.  You won’t be bombarded with emails, but the team will keep you informed and send you occasional updates, and in particular you will be the first to be informed when in due course applications open for those who hope to attend as students or helpers. A highlight of the course for some might be a visit to Liverpool Cathedral at the end, maybe to put into practice what you’ve learned!

It’s lucky the LDG dinner happened otherwise I would be scratching around trying to dress up a CCCBR Trustees Governance Review as a highlight of the fortnight. It was great! Actually I’ll revise that to interesting. The Council is a Charity and so needs to pass a ‘public benefit’ test. That is added into the Council’s objects which are “to advance the practice, heritage and appreciation of bell ringing as an enjoyable mental and physical exercise and unique performing art for the public benefit of both church and community”, something it does with virtually no income whatsoever. So actually the more rarefied and technical parts of the Council’s work with which so many ringers associate it are not nearly so relevant to the Council’s public benefit as promoting ringing externally.

It is a shame I cannot share with you a copy of the ANZAB newsletter, Ringing Towers, access to which is a member privilege. It really is a gold standard in report production. You can tell that the Editor is an architect when there was as much discussion on the architecture of the ANZAB Festival dinner venue as on the ringing arrangements! They held an ART course in Perth in February when the temperature outside was 42 degrees, more new rings of bells are going into New South Wales and Northern Territory which will be exciting for visitors, new ringers are being taught across the whole area – there does not seem to be any doom and gloom anywhere. Incidentally, in Thomas Perrins ANZAB must have the youngest leader of any territorial ringing association.