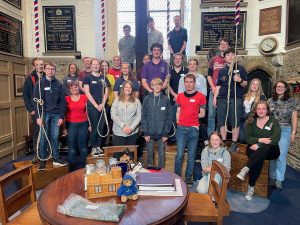 On Easter Sunday morning we were sitting having a coffee in the central square in Sorrento, when at five to nine the bells started ringing. Just two bells, a major third apart, being swung probably by one person and visible from outside. They only rang for five minutes but that was enough for us to know the service was about to start, and had we been going we would have needed to get our skates on. We had just been explaining to Charlie how Stedman Cinques could be started at different rows, and hearing the simplicity of the Italian call to worship we wondered whether we were over thinking this bell ringing lark!

It just goes to show, as we finalise the brief to marketing agencies for looking at ringing branding, how much more than the requirement for a call to worship our form of bellringing is. How lucky we are that we as a family could be sitting discussing Stedman Cinques over coffee in Sorrento rather than just spending five minutes ringing those two bells. What a rich tapestry we enjoy.

Well done to Andrew Bond from Barking for getting an Easter bellringing story onto the BBC website (‘Bellringing is more than a call to prayer’). The two-minute piece gets across many of the facets of ringing that make it attractive. The Romford Recorder also picked up the story but perhaps with fewer readers! Am I imagining it or is the media taking bellringing more seriously these days?

Another update on the new North West residential course, which is now open for booking (and with my whole family booked on it)! https://nwringingcourse.uk/ If you have been gazing longingly at all the courses which are towards the south of England, this is the opportunity to join one further north. As the course will be using local towers which do not have very effective sound control, simulators are being procured and installed so that the towers can be used pretty much all day, reducing time spent travelling around. The simulator equipment will then be available to use in other local towers before it gets used by the course next year.

Following my previous comments about whether safeguarding training applies to everyone or whether you can exempt yourself by suggesting you aren’t actually technically the tower captain (another 10,000 words received form that source this week), the Council has done a major update of its Safeguarding pages. It includes a table and a flowchart explaining how you decide which level of training is needed, bearing in mind that individual Dioceses have the final say, particularly on who does the Leadership training.

You will hopefully have already seen that this year’s Westley Award is open for entries (see Ringing World 11 March) – the closing date is 28 May. The BBC’s Sports Personality of the Year has an ‘Unsung Hero’ award who someone who does lots of work out of the limelight. I think of the Westley Award a bit like that – a chance to showcase and recognise all that quiet work that goes on up the tower that many ringers don’t notice, but which is essentially for the bells to continue to ring reliably when we want them to. So don’t let those steeple keepers’ lights hide under bushels! And you are allowed to nominate yourself if you are particularly unsung or don’t have a bushel.

I had a genuinely new experience last Saturday – attending a ringing event with no ringing responsibility at all but just as Charlie’s responsible adult. So responsible in fact that I dropped her off at the first tower and went to the pub. She was in safe hands though as this was the second YCRA event, this time in Bristol, and they are forming a good group of young ringers who are looking after each other. There was also some exemplary gender balance in the band placing at Redcliffe.

I am always interested in seeing how other organisations similar to the Central Council or to ringing generally are organised. Alan Ainsworth, who has a passion for cathedral music, sent me an article about the Friends of Cathedral Music, which has established a new umbrella charity with interesting parallels to us:

“Friends of Cathedral Music has embraced the challenging situation presented by the global pandemic by broadening its potential impact, streamlining its organisation and founding a new umbrella charity, the Cathedral Music Trust. A professionally run and forward-thinking organisation, we became a charitable incorporated organisation in 2020.

Building on the work of the Friends, the Trust’s aims are to increase public awareness and appreciation of cathedral music, support and encourage all those involved in making cathedral music, and extend its range of grants to individuals, choirs and choral foundations. It is especially committed to enabling children from a diverse range of backgrounds to experience the many benefits that come from being a chorister.”

When I became President, I dropped into an existing group of Trustees who had been in place since the Council adopted its post-CRAG structure. To keep things fresh, the structure only allows Trustees to stay in place for six years, and so at this coming AGM we will need to replace two – Alison Everett and David Smith. A call for nominations will be published shortly.

It is very important that the Executive (essentially the Trustees) represents the same breadth of ringing experience as the ringing community it serves. Both Alison and David won’t mind me saying that they are at the less experienced end of the scale (although still way above the ‘Median Ringer’).

So as we (and you) start to think of who might replace them bear in mind that it does not have to be the expert peal ringer or seasoned Association grandee with decades of ringing experience. We have some of those already. We need people who can relate to the learner, to the less experienced, the call change ringer, the tireless teacher. It may be you.