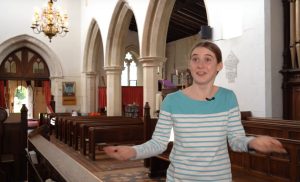 I first went to a ‘Ringing Roadshow’ many moons ago. It was an odd decision at the time, as I didn’t think it would be my sort of thing at all. I didn’t think it would be attended by the sort of people I knew. But I had just published those articles about Ringing Zones, and I was asked to have a stand and just be there to talk about them. So I printed a chart on A2 paper, and off I trotted to Lincoln.

It was a very interesting day because I found that I met all sorts of people I knew, who I had not seen for ages because I wasn’t bumping into them in the course of my ringing activities. I also met lots of new people, who were interested in and could relate to what I was saying. I particularly remember one lady telling me she felt as though she was carrying a suitcase with her all the time – her analogy for the burden of being an older learner, not expected to make progress.

Meeting lots of people is therefore one of the things to look forward to at the Roadshow in Nottingham on Sunday 4th September. This is not a Roadshow on the scale of those ones at Lincoln or Stoneleigh, but like the one at Goldsmiths in 2019. A key feature is what should be a really interesting series of talks, eight of them altogether on a range of subjects sure to provide something for everyone. Book here so we know numbers roadshow.cccbr.org.uk, although you can just pay on the door.

A young ringer contacted me recently about which university societies were strong because he didn’t know and didn’t know how to find out. Whilst not advocating choosing your university based on the quality of the ringing (that’s the sort of thing that happened when I went to university!) it can be a factor for the overall university experience. So the YCRA is going to be doing a ‘University Speed Dating’ event at the Roadshow – the opportunity to meet with members of the YCRA who have current knowledge of what ringing is happening at what universities, with the aim of making sure that any ringer going to university this year (or next) can get hooked up with the local university ringers.

Still on young ringers and the YCRA, the inaugural ‘Summer School’ in Bristol on Saturday 10th September needs some more students – young people who would be interested in learning to ring or just having a ringing taster day. They will be taught by one of a dozen young ringers who will have done an ART teaching course the day before. This might suit siblings of ringers, school friends, etc. Contact me or Colin Newman

The OS and ODG got a lovely bit of publicity with ringing for the 400th anniversary of the Oxford Botanic Garden & Arboretum. After making great efforts to educate the team putting together the event, ringing took place at Oxford tower and wider in the county, led by a group of the ODG’s young ringers. https://www.obga.ox.ac.uk/400th-anniversary-bell-ringing  Don’t just look at the website – watch some of the video. Good interviews with young ringers explaining how great ringing is. Well done them.

Andrew Howard mentioned the Women in Ringing project in a letter in The Ringing World, identifying this as a worthy cause that could be pushed more. It is difficult to know how to push it other than keep going on about it. Every practice I run and every band I place I try and encourage girls and women to ring round the back. We worked hard at Exeter Cathedral on youth contest day to make sure girls and boys shared the back bells. This is one for all of us. If you don’t remember what it was about, go to the Women in Ringing website and read some of the stories. This should be easy to fix but it won’t be unless we constantly think about it.

I am a big fan of ground floor rings because they make the bellringers part of the wider church, letting the congregation and visitors see what we do. At St Mary’s Moseley our exposure does bring us into a state of ‘mutual tolerance’ with the organ and choir – none of us can hear what we are doing above the noise of the other, especially as by a quirk of tuning the organ and the bells are half a semi-tone out (surprising discordant, even to the non musicians). There is a big crossover between ringers and choirs though, and we have much common ground. During Covid the Council consulted with both the RSCM and the RCO on Covid guidance, and we have now been in contact with both again about Safeguarding Training as they appear to have similar challenges to us.

I am going to go on about call changes again, only because I have added a chapter to my Ebook on call change ringing. Chapter 5 at callchanges.cccbr.org.uk covers the subject of the raise, which takes quite a lot of explaining, accompanied by YouTube videos of it being done well, and not so well. I am not sure how much has been written about ringing up – I bet Steve Coleman gives a good account in one of his books. This is my effort anyway.

Fundraising for the new Mobile Belfry continues, with a particularly generous donation from the Lancashire Association who have sponsored a complete bell, and also the Drapers’ Company, the Livery Company of which ringer David Chalk is current Master.

Finally, another Charlie quote to share. Eleanor and I went off to ring a peal at St Martin’s Birmingham for the opening of the Commonwealth Games, leaving Charlie with one job of learning Cornwall Surprise Major. When we got home, she said “I really like Cornwall (lots of cats in fezzes) and therefore by association the whole County of Cornwall.” Cream teas all round!