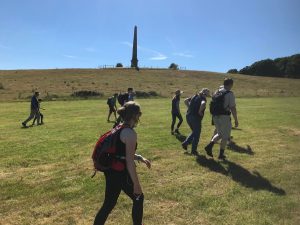 I don’t usually answer calls from 0800 or 0345 numbers. They’re rarely good news. If it’s important they will leave a message. However, I have recently adopted a different strategy of answering the call but then just not saying anything, to see what happens. When I did this last Sunday morning to an 0800 number just before 9am it turned out to be BBC Radio Northampton for a live interview that I had forgotten about! There ensued some hasty scribbling of notes while they did a sound check before I was handed over the live interviewer.

The subject was the proposed National Ringing Centre at Northampton. A week before, the CCT’s project manager had been interviewed and she said how pleased she was that the Central Council and bellringing were part of the project. Work has started on the buildings, they are interviewing potential pub operators, and we have been asked to give details of how we want the ringing centre to look – a floor covering without three inches of guano would be a good start.

Fortunately, the presenter asked good questions, so I didn’t sound like a politician answering a question that wasn’t actually asked. I was able to talk about marketing ringing to young people, the developing relationship with the CCT, the benefits of having a national base in Northampton, and the relationship between bellringers and pubs, which makes the Old Black Lion such a good fit.

I was slightly better prepared for an afternoon video call with Paul Ashe, organiser of the National Bell Festival (bells.org). I had been a bit sceptical when he initially got in touch, inviting UK bellringers to participate in this US-led (or more precisely Washingon DC-led) festival of bells across the world, specially ringing on New Year’s Day. I said we didn’t need an additional excuse to ring on New Year’s Day! But learning about one of his more ambitious projects (currently confidential), and his desire to take change ringing into schools in more disadvantaged parts of Washington DC, my ears pricked up. He realised what the ringing community was like when he found I personally knew every single person he named. It may help his cause, and costs us little, if all the ringing across the world this coming New Year is designated as part of this Festival.

Paul Ashe clearly follows all the major bell-related stories. His blog on bells.org covered the Hartlepool retuning case “the port town of Hartlepool, England, boasts a ring of eight merry peal bells”.  That wasn’t how Julia Cater described them in her radio interview!

The new North West course (https://nwringingcourse.uk/) is a little under a month away (11 to 14 August) and excitement is mounting with the arrival in my inbox of an invoice, and a request for a size for my polo shirt. Helpers are still needed, particularly in the “Moving on with Minor” and “Stedman” groups and there are a few student places still available, particularly in the “Basic Conducting” course.

The Basic Conducting course is one I am teaching, and I am working on how I can expand a previous day course on conducting that I have given a few times into a longer format. It’s a subject I really like teaching because the value that can be added to someone who is confident at making calls is enormous – just explaining and then demonstrating some of the tricks of the trade. One group I taught set up a WhatsApp group called the ‘Lightbulb Conducting Club’, reflecting the lightbulb moments that the course had given. Please sign up – lightbulb moments promised!

Attention has turned back to the HLF bid, now the NHLF bid, for taking ringing into schools. To support wordsmith Roger Booth’s application form I have been building a numerical model – developing assumptions to see how many net new ringers would ultimately be created by a properly funded and resourced plan of introducing ringing into schools and youth groups, how many teachers you would then need, and in how many towers, etc. It might sound like more of a business plan than ringing as we know it but when you ask for £250,000 you need to be clear how the plan might actually work, and provide a basis for measurement. It does rather focus the mind. How many places could actually cope with a constant influx of young people wanting to learn, teach them well, and put them into a structure that nurtures their ringing development? We will need three or four locations prepared to be pilots in the first year.

I talked through a few of the issues with developing young ringing during the St Martin’s Guild Summer Walk. If your branch, district or association is looking for something different to do, you can do worse than a long country walk, between a small number of towers and a couple of pubs. We’ve had a few of them, with weather ranging from monsoon (“there’s no such thing as bad weather, only unsuitable clothing”) and extreme heat. One thought shared with me was whether it is actually possible to inject young ringers into a tower if the rest of the band is of grandparent age. Have we left it too late? Recruiting to fill the missing age gap is also important.

It is not too late to throw your hat in the ring if you think being Secretary of the Central Council is your calling, although if you’re reading this in the Ringing World rather than online and didn’t turn to it first, you need to throw your hat quickly. Mary Bone has recorded a YouTube video explaining what being Secretary is like and how much she has enjoyed the role.

And finally, we have launched a website for the Central Council roadshow. Rather than say what’s on it, go to https://roadshow.cccbr.org.uk/  We have great speakers and exhibitors giving us their time, lots of things to see and learn, so it would be great if we can make a big event of it.