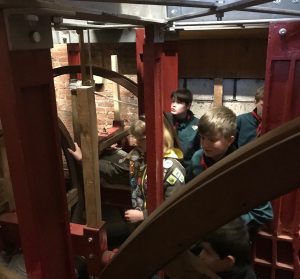 A common feature of working environments is the Monday morning greeting “good weekend?” Sometimes I find that a weekend has been so full of different ringing activities and ridiculous logistics, it is easier just to deny having done anything than explain it all. Last weekend was just such a weekend, with the Friday evening filled with filming a group of scouts experiencing bellringing, then on Saturday there was just time to squeeze in a quick(ish) parkrun before the ART Masterclass, which didn’t finish until leaving The Bull at 9pm, then Sunday morning ringing at my two home towers, coffee with friends from Jersey on a University recce, quarter peal for two of the ART Masterclass attendees, whizz down to Worcester to ring a quarter at the Cathedral for evensong, and finally whizz home to see Chennai lose again. Then evening off to catch up on emails.

Two of those are worth some expansion. The filming was at Moseley and was fulfilling a brief from the Schools and Youth Groups workgroup to provide Girlguiding with a five-minute film on introducing bellringing. As I had just arranged a visit from a local Scout pack to Moseley, we tied the two together and filmed it. Five Brumdingers came in uniforms (three Scouts, a Brownie and a Guide), we added in a couple of Rangers and a Guide leader, welcomed 15 visiting Scouts, flew in a professional videographer who is already filming for us, and the whole evening was a great success. Rachel Mahoney, current Master of BUSCR, was the ‘talent’, with a well-crafted script and only slightly excessive enthusiasm.

The ART Masterclass remains my second favourite day of the year after the 12 Bell Final. Excellently organised and hosted by Stephanie Warboys and the St Martin’s Guild, this provides focused and tailored ringing for Learning the Ropes Level 5 graduates (10 in all). I had three hours of 8- and 10-bell ringing with my group, all under 18, followed by two hours of higher numbers ringing at the Bull Ring.

My CC inbox wasn’t helped this week by fallout from one individual who shall remain nameless who is intent on bringing down the Established Church and challenging its rights to impose safeguarding requirements on him. When I got home from a peal on Wednesday evening, I had 24 emails on the subject to delete. The job of safeguarding officers and Guild leaders is hard enough without having to deal with all this nonsense, and it will get harder and harder to persuade people to take on positions of responsibility if it persists. The needs of the many outweigh the needs of the few – or the one.

I have also been dealing with the fallout from the news that WHW is false (see RW 1 Apr). This cataclysmic revelation, on a par with Plato and Socrates suggesting that the earth was not flat, has led to much soul-searching in the Technical & Taxonomy workgroup in particular. But then I had a quarter of Cambridge Minor to call last Sunday and I don’t know anything else, so we have decided to just to live with it. Life’s too short to worry about such things. Let’s hope Don Morrison’s composition of Kent Maximus with 27 Homes isn’t false!

It is always a pleasure to sign off BRF requests, which come before the Trustees on a reasonably regular basis. Behind any grant there will be a story of a project that has no doubt been years in the making, close to coming to fruition and that joyous time when new or better bells ring again. This month we signed off donations to Bratton and Didbrook from the CC BRF as well as three donations from the Fred Dukes International fund. Don’t forget the CC BRF when funding your project – the grants are never huge but it all helps.

This looks to the Spring and Summer when ringing courses have resumed in earnest. Essex has just happened, Hereford is on at the end of the month (and sold out), Bradfield is now open for booking, and the new North West Ringing Course, to be based at Myerscough College near Preston, will open for booking very shortly (if not already).

Once a year we meet our friends from Ecclesiastical Insurance for a review of all matters relating to insurance and ringing. We are fortunate that the Church Underwriting Manager at Ecclesiastical is a ringer, Marcus Booth, now ably assisted by Becca Meyer. There are thankfully few insurance claims involving ringing, and the insurers are very keen not to see one arising from the burning issue of rope warmers! There is nothing more likely to give a church underwriter sleepless nights than a home-made contraption featuring a heating element (filament lightbulb imported from India) left plugged in when the church is empty, with flammable ropes dangling in it, sitting on the carpet or a timber floor. Expect them to publish some guidance shortly!

After some discussion on quite how much of the insurance ringing associations pay for doesn’t actually cover what many ringers think it covers (personal accident policies that pay the association not the individual, for instance), I suggested a document which explained the principles of ringing and insurance in simple terms, only for Alison Hodge and Marcus to say “we’ve already done that”. See the CC website under ‘tower resources’ then look for Insurance on the ‘Tower Operations’ tab. Catch Marcus presenting at the Roadshow in in Nottingham in September (Sunday 4th).

Amongst the other planning for the Council meeting and Roadshow. I am working with Jim Crabtree of the Southwell and Nottingham DG on the Friday ringing programme. We are planning much more of a ringing training day for local ringers than just a traditional tour for visiting Council members, including sessions at three different levels. I will run a couple of practices myself on ringing Surprise Major from the Core Seven and Beyond. Can we get eight people together to ring some Carolina Reaper?