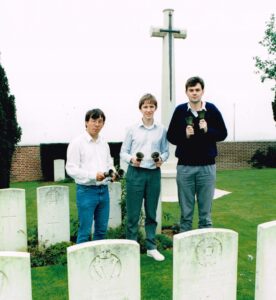 Ringing in the Remembrance Sunday peal at Worcester Cathedral, half-muffled on the Harmonic Minor Ten, reminded me of quite how public a performance ringing can be. I had stood outside beforehand, listening to the brass band reeling off the remembrance ‘set’. It was a public performance, they looked the part, had clearly put in a lot of practice, and people were listening, probably understanding the skill involved.

Then at 11.15 after the gun, it was our turn. Our instruments were louder than theirs, and we performed for far longer. But it was done with the same degree of skill (more I think), and considerably more physical effort to put in a performance. (I didn’t see the Euphonium player struggling with an instrument that wouldn’t do what he wanted it to do.) I knew that the hundreds of people who had been listening to the band were now listening to us, probably not understanding the skill involved.

We are very keen on the consideration of ringing as a performing art, rather than just as a hobby or pastime. ‘Performing Art’ reflects our public performance, the degree of skill involved, the pursuit of a high standard, our particular form of music, and that we do this while working as a team with the biggest instruments in the world.

Following a talk given by Mark Regan and me to the national DAC conference, Mark is this week giving a talk to the national church rural officers’ conference. This is all about getting across the importance of bells and ringers and the part we can play in keeping churches alive. The Bishop of Worcester endorsed the importance of bells and ringing in his introduction to the talk:

“If the towers and spires of thousands of wonderful parish churches are the distinctive vision of the English landscape, it is their bells that is its quintessential sound. It is a glorious one, which proclaims that these churches are open, living, and active, as they have been for hundreds of years, summoning us to perceive that ‘the world is charged with the grandeur of God’” John Inge, Bishop of Worcester.

We have now signed a formal Memorandum of Understanding with the Churches Conservation Trust to develop a ringing centre at the Old Black Lion in Northampton. This is a project that has been bubbling along in the background since Christopher O’Mahony’s time as President, but which has now taken a big step forward as the CCT has filed the planning application and is now actively looking for an operator for the pub. They are specifically advertising for a pub operator that will appreciate bellringers! I am sure we can demonstrate our value in due course.

And in a year or so’s time we hope to be looking for people with trade skill to help fit it out, because it would be good to be able to do it with volunteer effort rather than pay builders too much. Not that I have anything against builders, it’s just that we may well have the skills between us.

It is one of the more unusual entries on our “Situations Vacant” page which has just been published on the Council website. Since the change in structure of the Council which has expanded volunteering and workgroup membership beyond just CC Reps, there hasn’t been a way of making opportunities known other than Workgroup leaders using their own contacts. So we have collected together all the missing pieces of the jigsaw (and if you actually bought a jigsaw with this many pieces missing you would be seriously annoyed) and published it for all to see here.

I had the opportunity to Zoom into ART’s management away day last week and was taken aback by the sight of people having an actual physical meeting complete with sandwiches! It seemed very strange but a welcome return to normality. It was good to talk about how ART can support recruitment efforts next year by building the core of confident teachers. ART is working hard on expanding the number of courses it can run so if you have people in your area wanting to learn to teach, think about asking for a bell handling teaching course. They are always very well received. It is not some sort of indoctrination into a secret society – it is common sense, helpful stuff.

Last weekend I was fortunate to be able to attend the College Youths dinner, the largest regular ringing dinner with attendances usually exceeding 300. It was an opportunity to talk to many people I have worked with since becoming President but who I have not actually met, or that I have not met since having this slightly different relationship with them. And also a few of my friends who queried why I was going to be CC President but now get it.

In the very early days of the internet, when I ran an internet company called Coconut, we had a Christmas Party quiz where we got every employee’s browsing history and guessed whose was whose. A bit embarrassing for some people, exposing the sad lives of software developers. I will forgive you if cccbr.org.uk is not in your last 10 sites, so each blog I am going to highlight one thing on the CC website which is interesting and which I bet you haven’t seen. I’ll see how long I can keep going.

This week it is the turn of the Rolls of Honour, to finish as I started, with a Remembrance Day theme. Alan Regin has done an amazing job expanding the Rolls of Honour, searching out more names of ringers who gave their lives in the two World Wars. There is so much information here, searchable in numerous ways. I just scanned through and picked one name – Chaplain Fourth Class Rev. Archibald Selwyn Prior, Cambridge University Guild. Went to Normandy on 16 June 1944 and died 48 days later, leaving a wife and six children. His village had a bell cast in his memory.